Muş province is divided into 6 districts (capital district in bold): 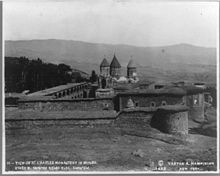 Among the historical sites of the Mush province are two of the holiest Armenian sites: