The Marmara Region (Turkish: Marmara Bölgesi), with a surface area of 67.000 km², is the smallest but most densely populated of the seven geographical regions of Turkey. It represents approximately 8.6% of the Turkish national territory and about 30% of its population.

This region was officially put in existence after the Geography Congress of 1941 in Ankara and is geographically divided into four regional parts, or areas.

Its name derives from the Sea of Marmara, which itself is named for the island of Marmara. 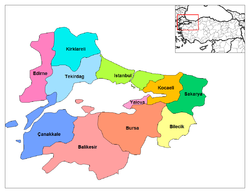 The Yıldız Mountains and Uludağ are in the Marmara Region. Islands in the Aegean Sea are Gökçeada and Bozcaada, and in the Sea of Marmara are Marmara Island, Avşa, Paşalimanı, İmralı and the Princes Islands of Istanbul.

The Marmara region has a hybrid mediterranean climate/humid subtropical climate on the Aegean Sea coast and the south Marmara Sea coast, an oceanic climate on the Black Sea coast and a humid continental climate in the interior. Summers are warm to hot, humid and moderately dry whereas winters are cold and wet and sometimes snowy.