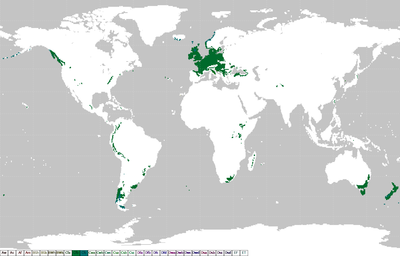 An oceanic climate, also called marine west coast climate, maritime climate, Cascadian climate and British climate for Köppen climate classification Cfb and subtropical highland for Köppen Cfb or Cwb, is a type of climate typically found along the west coasts at the middle latitudes of some of the world's continents. This climate generally features warm, but not hot summers and cool, but not cold winters, with a narrow annual temperature range. It typically lacks a dry season, as precipitation is more evenly dispersed through the year. It is the predominant climate type across much of Europe, coastal northwestern North America, portions of southern South America and Africa, southeast Australia, New Zealand, as well as isolated locations elsewhere.

Climates near the ocean generally have warm (but not hot) summers, and cool (but not cold) winters. They are characterized by a narrower annual range of temperatures than are encountered in other places at a comparable latitude, and generally do not have the extremely dry summers of Mediterranean climates.[1] Oceanic climates are most dominant in Europe, where they spread much farther inland than in other continents.[2]

Between October and May, Seattle is mostly or partly cloudy six out of every seven days[5]

Precipitation is both adequate and reliable throughout the year in oceanic climates, except in certain tropical highland areas, which would have tropical or humid subtropical climates (with a dry season in winter) if not for the high altitude making them cooler (Koppen Cwb). Under some variations of the Koeppen classification system, parts of the Pacific Northwest and south-central Chile are sometimes considered as having a Mediterranean climate (Koppen "Csb") due to a drying trend in the summer. However despite the "Csb" designation, these areas are generally considered oceanic as opposed to "Mediterranean".

Overall temperature characteristics vary among oceanic climates; those at the lowest latitudes are nearly subtropical from a thermal standpoint, but more commonly a mesothermal regime prevails, with cool, but not cold, winters and warm, but not hot, summers. Summers are also cooler (often much cooler) than in areas with a humid subtropical climate. Average temperature of warmest month must be less than 22 °C (72 °F) and that of the coldest month warmer than −3 °C (27 °F) although American scientists prefer 0 °C (32 °F) in the coldest month. Poleward of the latter is a zone of the aforementioned subpolar oceanic climate (Köppen Cfc),[4] with long but relatively mild winters and cool and short summers (average temperatures of at least 10 °C (50 °F) for one to three months). Examples of this climate include parts of coastal Iceland in the Northern Hemisphere and extreme southern Chile and Argentina in the Southern Hemisphere.

The British Isles experience a typically maritime climate, with prevailing south-westerly winds from the Atlantic Ocean. The annual average temperature range in the British Isles is only about 14 °C (25 °F).[6] Although the west coast of Alaska experiences a maritime climate, the absence of an equally significant warm Pacific current in the upper-mid latitudes means that these regions are generally colder in winter, with more precipitation falling as snow. Typical oceanic climates are also found in the Netherlands, Belgium, most of France, western Germany, northern Spain, etc.

All mid-latitude oceanic climates are classified as humid. Some rainshadow climates with thermal régimes similar to those of oceanic climates but steppe-like (BSk) or even desert-like (BWk) scarcity of precipitation include lowland valleys of Washington and Oregon to the east of the Cascade Range, Patagonia in southern Argentina, and the Atacama Desert in northern Chile. Another example are coastal areas in southeast Western Australia.

Under Koeppen-Geiger, many areas generally considered to have Oceanic climates are classified as cool summer, dry-summer subtropical (Csb). These areas are not usually associated with a typical Mediterranean climate, and include much of the Pacific Northwest, southern Chile, parts of west-central Argentina, and northwest of the Iberian Peninsula.[7] Many of these areas would be classified Oceanic (Cfb), except dry-summer patterns meet Koeppen's Cs thresholds, and cities such as Concepción, Chile; Seattle, Washington; Portland, Oregon; Victoria, British Columbia; and Vancouver, British Columbia can be classified as Csb.

The only noteworthy area of Maritime Climate at or near sea-level within Africa is in South Africa from Mossel Bay on the Western Cape coast to Plettenberg Bay, with additional pockets of this climate inland of the Eastern Cape and KwaZulu-Natal coast. Interior southern Africa, elevated portions of eastern Africa, and Mozambique also share this climate type. It is usually warm most of the year with no pronounced rainy season, but slightly more rain in autumn and spring. The only significant areas where this climate is found in Asia is on the Black Sea coast in northern Turkey, in small pockets along or near the Caspian Sea in Azerbaijan and in small pockets along or near the Tsugaru Strait in northern Japan. The oceanic climate is prevalent in a good portion of western Europe and the European part of northern Turkey. The oceanic climate is prevalent in the more southerly locations of Oceania. A mild Maritime climate is in existence in New Zealand, the island of Tasmania, Australia, southern parts of Victoria and New South Wales, Australia. It can also be found along the western areas of the south coast of Western Australia. The oceanic climate is found in isolated pockets in South America. It exists in central Argentina, southern Chile and parts of Brazil, Ecuador and Colombia. The oceanic climate exists in an arc spreading across the north-western coast of North America, largely in the Pacific Northwest. It includes the western parts of Washington and Oregon, the Alaskan panhandle, western portions of British Columbia, and north-western California.[7] A significant portion of oceanic climate exhibited in North America features a drying trend in the summer, thus falling under the Marine West Coast subcategory explained below.

The Subtropical Highland variety of the oceanic climate exists in elevated portions of the world that are either within the tropics or subtropics, though it is typically found in mountainous locations in some tropical countries. Despite the latitude, the higher altitudes of these regions mean that the climate tends to share characteristics with oceanic climates, though it also tends to experience noticeably drier weather during the "low-sun" season.

In locations outside the tropics, other than the drying trend in the winter, Subtropical Highland climates tend to be essentially identical to an oceanic climate, with mild summers and noticeably cooler winters plus, in some instances, some snowfall. In the tropics, a Subtropical Highland climate tends to feature spring-like weather year-round. Temperatures here remain relatively constant throughout the year and snowfall is seldom seen. Areas with this climate feature monthly averages below 22 °C (72 °F) but above −3 °C (27 °F) (or 0 °C (32 °F) using American standards). At least one month's average temperature is below 18 °C (64 °F). Without the elevation, many of these regions would likely feature either tropical or humid subtropical climates. These regions usually carry a Cwb or Cfb designation, though very small areas in Yunnan, Sichuan and parts of Argentina and Bolivia may have summers sufficiently short to be Cwc with fewer than four months over 10 °C (50 °F), though no records exist for such stations[8].

This type of climate exists in parts of east, south and south-eastern Africa, some mountainous areas across southern Europe, sections of mountainous Latin America, some mountainous areas across Southeast Asia, higher elevations of the southern Appalachians, and parts of the Himalayas. It also occurs in a few areas of Australia, although average high temperatures during summers there tend to be higher and the climate drier than is typical of Subtropical Highland Climates, with maximums sometimes exceeding 40 °C (104 °F).[9]

Despite the fact that dry summers is a feature which differentiates Csb areas from oceanic climates, some areas of Csb climate are typically considered "Oceanic" as opposed to "Mediterranean" (see Mediterranean climate). Technically, this version of the Oceanic climate meets Koppen's minimum precipitation threshold limit of 30 millimetres (1.2 in) (or 40 millimetres (1.6 in) under Koppen-Geiger), resulting in a Csb designation. Nevertheless, due to the higher annual accumulation of precipitation and generally cloudier conditions that these regions experiences in comparison to other areas with Csb climates, scientists such as Trewartha consider this climate oceanic (Do, which is an oceanic climate classification under the Trewartha system). This is especially the case in the Pacific Northwest region of the United States and Canada, some sections of coastal Chile, in Galicia in northwestern Spain and in northern Portugal, where conditions are wetter and generally cloudier during the course of the year than typical Csb climates.[12] Nevertheless, those regions have several Mediterranean features :