Arameans
This article is about the ancient people. For the modern group, see Aramaean identity.

The Aramaeans, also Arameans (Greek: Ἀραμαῖοι), were a Northwest Semitic semi-nomadic and pastoralist people who originated in what is now modern Syria (Biblical Aram) during the Late Bronze Age and the Iron Age. Large groups migrated to Mesopotamia where they intermingled with the native Akkadian (Assyrian and Babylonian) population.

The Aramaeans never had a unified nation; they were divided into small independent kingdoms across parts of the Near East, particularly in what is now modern Syria. After the Bronze Age collapse, their political influence was confined to a number of Syro-Hittite states, which were entirely absorbed into the Neo-Assyrian Empire by the 8th century BC.

By contrast, the Aramaic language came to be the lingua franca of the entire Fertile Crescent, by Late Antiquity developing into the literary languages such as Syriac and Mandaic. Scholars even have used the term "Aramaization" for the process by which the Akkadian/Assyro-Babylonian peoples became Aramaic-speaking during the later Iron Age.[1]

The origin of the Aramaeans is still uncertain, arising from the limited amount of evidence regarding the mention of Aramaeans in Mesopotamian inscriptions.

The toponym A-ra-mu appears in an inscription at Ebla listing geographical names, and the term Armi, which is the Eblaite term for nearby Aleppo, occurs frequently in the Ebla tablets (ca. 2300 BC). One of the annals of Naram-Sin of Akkad (c. 2250 BC) mentions that he captured "Dubul, the ensi of A-ra-me" (Arame is seemingly a genitive form), in the course of a campaign against Simurrum in the northern mountains.[2] Other early references to a place or people of "Aram" have appeared at the archives of Mari (c. 1900 BC) and at Ugarit (c. 1300 BC). There is little agreement concerning what, if any, relationship there was between these places, or if the Aramu were actually Aramaeans; the earliest undisputed mention of Aramaeans as a people is in the inscriptions of Tiglath Pileser I (c. 1100 BC).[3]

A city of Aram (or Iram) is also mentioned in the Qur'an, as Aram of the Pillars, home to the A'ad people in Alahqaf region الأحقاف (The Rub' al Khali).

Nomadic pastoralists have always been a feature of the Middle East, but their numbers seem to vary according to climatic conditions and the force of neighbouring states inducing permanent settlement. The period of the Late Bronze Age seems to have been one of increasing aridity, weakening neighbouring states, and inducing transhumance pastoralists to spend longer and longer periods with their flocks. Urban settlements diminished in size, until eventually fully nomadic pastoralist lifestyles came to dominate the region. These highly mobile, competitive tribesmen with their sudden raids were a continued threat to long distance trade and interfered with the collection of taxes and tribute. In the early 14th century BC, much of Israel was under Aramaean rule for eight years according to the Biblical Book of Judges, until Othniel defeated the forces led by Chushan-Rishathaim, the King of Aram-Naharaim. Other entities mentioned in the Hebrew Bible include Aram Damascus and Aram Rehob.

The Ahlamû (= wanderers) are first mentioned in the el-Amarna letters alluding to the king of Babylon; the presence of the Ahlamû are also attested in Assyria, Nippur and even at Dilmun (Bahrain); Shalmaneser I (1274-1245 BC) defeated the Shattuara, King of Mitanni and his Hittite and Ahlamû mercenaries are mentioned in the Jazirah. The term appears equivalent to the Egyptian term Shasu (Shsw = wanderer), who replaced the outlaw 'Apiru (cuneiform SA.GAZ) as the major source of instability in the Egyptian Levantine empire from the reign of Tutankhamun onwards. In the following century, the Ahlamû cut the road from Babylon to Hattusas, and Tukulti-Ninurta I (1244-1208 BC) claims that he conquered Mari, Hana[disambiguation needed

] and Rapiqum on the Euphrates and "the mountain of the Ahlamû", apparently the region of Jebel Bishri. 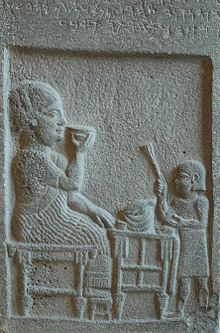 For the first time, an inscription of Tiglath-Pileser I (1115-1077 BC) refers to the "Ahlamû-Aramaeans" (Ahlame Armaia) and shortly after, the Ahlamû rapidly disappear from Assyrian annals, to be replaced by the Aramaeans (Aramu, Arimi). "Ahlamû-Aramaeans" would consider the Aramaeans as an important and in time dominant faction of the Ahlamû tribes, however it is possible that the two peoples had nothing in common, but operated in the same area.[4] It is conceivable that the name "Aramaeans" was a more accurate form of the earlier ethnonym Martu (Amorites, westerners) in the Assyrian tablets.

The Aramaeans were, in the 11th century BC, established in Syria. The Bible tells us that Saul, David and Solomon (late 11th to 10th centuries) fought against the Aramaeans kingdoms across the northern frontier of Israel: Aram-Sôvah in the Beq’a, Aram-Bêt-Rehob and Aram-Ma’akah around Mount Hermon, Geshur in the Hauran, and Damascus. An Aramaean king's account dating at least two centuries later, the Tel Dan Stele, was discovered in northern Israel, and is famous for being perhaps the earliest non-Israelite extra-biblical historical reference to the Israelite royal dynasty, the House of David. Farther north, the Aramaeans were in possession of Hamath on the Orontes and were soon to become strong enough to dissociate with the Neo-Hittite block.

The Aramaeans conquered, during the 11th and the 10th centuries, Sam’al (Zenjirli), also known as Yaudi, the region from Arpad to Aleppo which they renamed Bît-Agushi, and Til Barsip, which became the chief town of Bît-Adini, also known as Beth Eden. At the same time, Aramaeans moved to the east of the Euphrates, where they settled in such numbers that the whole region became known as Aram-Naharaim or "Aram of the two rivers". One of their earliest kingdoms in Mesopotamia was Bît-bahiâni (Tell Halaf). North of Sam'al was the Aramaean state of Bit-Gabari, sandwiched between the Neo-Hittite states of Carchemish, Gurgum, Tabal, Khattina and Unqi. Whilst these later states maintained a Neo-Hittite hieroglyphic for official communication, it would seem that the population of these small states was progressively Aramaeanised.

Aramaean kingdoms, like much of the near east, were subjugated by the Neo Assyrian Empire, beginning with the reign of Adad-nirari II in 911 BC. This process was continued by Ashurnasirpal II, and his son Shalmaneser III, who destroyed many of the small tribes, and gave control of Aramea (modern Syria) and local trade and natural resources to the Assyrians. The portion of the Aramaean population that had migrated to or were deported to Assyria and Babylonia intermixed ethnically with the indigenous Akkadians of Assyria and Babylonia. This process, and the adaptation of Assyro-Babylonian culture, religion, customs and identity, led to the absorption and disappearance of Aramean ethnic identity in Mesopotamia and its immediate surrounding regions. Conversely, the eastern Aramaic language was adopted as the lingua franca of the Neo Assyrian Empire, and the Neo Babylonian and Achaemenid empires that succeeded it, leading to the Assyro-Babylonian population eventually speaking an Akkadian influenced dialect of Aramaic.

Aramaeans continued to be the majority population in their homeland, which is in effect most of modern Syria and part of south central Asia Minor until well after the Arab Islamic conquest of the 7th century AD. A number of Aramaean kingdoms sprang up in the region, the most important being Palmyra. There was some synthesis with Arab peoples (and possibly Greeks and Phoenicians also), and the Nabatean civilisation of what is today Jordan and southern Syria had an essentially a mixed Aramaean-Arab identity. From the 2nd Century AD they began to adopt Christianity in increasing numbers, and by the 4th Century AD the population was largely Christian. After the Arab Islamic conquest of the region in the 7th Century AD, Aramaeans gradually became a minority in their homelands, the language was gradually replaced by Arabic, as ever increasing numbers of Arabs, (together with Turkic and Iranic peoples) began to move into the region. Those indigenous peoples who converted to Islam rapidly lost their Aramaean identity, intermixed with the Arab rulers and essentially became Arabs. However, a proportion of the population resisted the process of Arabization and Islamification, retaining Western Aramaic language and Christian faith.

Aramaeans are mostly defined by their use of the West Semitic Old Aramaic language (1100 BC–AD 200), first written using the Phoenician alphabet, over time modified to a specifically Aramaic alphabet.

As early as the 8th century BC, the Aramaic language competed with the East Semitic Akkadian language and script in Assyria and Babylonia, and thereafter it spread throughout the Near East in various dialects. By around 800 BC, Aramaic had become the lingua franca of the Neo Assyrian Empire. Although marginalized by Greek in the Hellenistic period, Aramaic in its varying dialects remained unchallenged as the common language of all Semitic peoples of the region until the Arab Islamic conquest of Mesopotamia in the 7th century AD after which it was gradually superseded by Arabic.

The late Old Aramaic language of the Neo-Assyrian Empire, Neo-Babylonian Empire and Achaemenid Persian Empire developed into the Middle Aramaic Syriac language of Persian Assyria which would become the liturgical language of Syriac Christianity. The descendant dialects of this branch of Mesopotamian Aramaic (which still retains a number of Akkadian loan words) still survive as the spoken and written language of the ethnically Mesopotamian Assyrians to this day, and is found mostly in Iraq, Iran, northeast Syria, southeast Turkey, Armenia, Georgia, southern Russia and Azerbaijan, as well as in diaspora communities in the west, particularly the USA, Canada, Australia, Sweden and Great Britain. The Western Aramaic dialect of the Arameans themselves is now only spoken by tiny minorities in one or two villages in Syria. Mandic is spoken by up to 75,000 speakers of the ethnically Mesopotamian Gnostic Mandean sect, mainly in Iraq and Iran. A number of Jews, particularly those originating in Iraq, and to a lesser degree Iran and Syria, retain Aramaic as a spoken tongue, however this is largely being eroded by Hebrew.

It appears from their inscriptions as well as from their names that Aramaeans worshipped Assyro-Babylonian gods such as Haddad (Adad), Sin, Ishtar (whom they called ‘Attar), Shamash and Nergal, and Caananite/Phoenician dieties such as the storm-god, El, the supreme deity of Canaan, Anat (‘Atta) and others.

The Aramaeans who lived outside their homelands apparently followed the traditions of the country where they settled. The King of Damascus, for instance, employed Phoenician sculptors and ivory-carvers. In tell Halaf-Guzana, the palace of Kapara, an Aramaean ruler (9th century B.C.), was decorated with orthostats and with statues that display a mixture of Mesopotamian, Hittite and Hurrian influences.