The Christian left is a term originating in the United States, used to describe a spectrum of left-wing Christian political and social movements which largely embraces social justice.

The term often specifically refers to Christian beliefs and can be interchangeable with the term Religious left. Subsequently, the term has been used to describe groups and persons from countries outside the U.S.

As with any division inside the left- and right- wings of the political spectrum, such a label is an approximation, including within it groups and persons holding diverse viewpoints. The term left-wing might encompass a number of values which may or may not be held by different Christian movements and individuals.

As the unofficial title of a loose association of believers, it does provide a clear distinction from the more commonly known "Christian Right" or "Religious Right" and its key leaders and political views.

The most common religious viewpoint which might be described as 'left wing' is social justice, or care for the poor and the oppressed (see Minority groups). Supporters of this might encourage universal health care, welfare provision, subsidized education, foreign aid, and Affirmative Action for improving the conditions of the disadvantaged. Stemming from egalitarian values, adherents of the Christian left consider it part of their religious duty to take actions on behalf of the oppressed. As nearly all major religions contain some kind of requirement to help others, social justice has been cited by various religions as in line with their faith.

The Christian Left holds that social justice, renunciation of power, humility, forgiveness, and private observation of prayer (as opposed to publicly mandated prayer), are mandated by the Gospel (Matthew 6:5-6). The Bible contains accounts of Jesus repeatedly advocating for the poor and outcast over the wealthy, powerful, and religious. The Christian Left maintains that such a stance is relevant and important. Adhering to the standard of "turning the other cheek", which they believe supersedes the Old Testament law of "an eye for an eye", the Christian Left often hearkens towards pacifism in opposition to policies advancing militarism.

While non-religious socialists sometimes find support for socialism in the Gospels (for example Mikhail Gorbachev citing Jesus as "the first socialist"),[1] the Christian Left does not find that socialism alone as an adequate end or means. Christian faith is the core of their belief which in turn demands social justice.

Early antagonism between the left and Christianity

However, in the 19th century, some writers and activists developed a school of thought, Christian socialism, a branch of Christian thought that was infused with socialism.

Early socialist thinkers such as Robert Owen, Charles Fourier, and Henri de Saint-Simon based their theories of socialism upon Christian principles. Karl Marx and Friedrich Engels reacted against these theories by formulating a secular theory of socialism in The Communist Manifesto.

Alliance of the left and Christianity

Starting in the late 19th century and early 20th century[citation needed], some began to take on the view that genuine Christianity had much in common with a Leftist perspective. From St. Augustine of Hippo's City of God through St. Thomas More's Utopia major Christian writers had expounded upon views that socialists found agreeable. Of major interest was the extremely strong thread of egalitarianism in the New Testament. Other common leftist concerns such as pacifism, social justice, racial equality, human rights, and the rejection of excessive wealth are also expressed strongly in the Bible. In the late 19th century, the Social Gospel movement arose (particularly among some Anglicans, Lutherans, Methodists and Baptists in North America and Britain,) which attempted to integrate progressive and socialist thought with Christianity to produce a faith-based social activism, promoted by movements such as Christian Socialism. Later, in the 20th century, liberation theology was championed by such writers as Gustavo Gutierrez and Matthew Fox.

Christian left and campaigns for peace and human rights

Some Christian groups were closely associated with the peace movements against the Vietnam War as well as the 2003 Invasion of Iraq. Religious leaders in many countries have also been on the forefront of criticizing any cuts to social welfare programs. In addition, many prominent civil rights activists (such as Martin Luther King, Jr.) were religious figures.

Christian left in the United States

In the United States, members of the Christian Left come from a spectrum of denominations: Peace churches, elements of the Protestant mainline churches, Catholicism, and some evangelicals.

The Christian Left does not seem to be so well-organized or publicized as its right-wing counterparts.[2] Opponents state that this is because it is less numerous. Supporters contend that it is actually more numerous but composed predominantly of persons less willing to voice political views in as forceful a manner as the Christian Right, possibly because of the aggressiveness of the Christian Right. Further, supporters contend that the Christian Left has had relatively little success securing widespread corporate, political, and major media patronage compared to the Right. In the aftermath of the 2004 election in the United States Progressive Christian leaders started to form groups of their own to combat the Religious Right; The Center for Progressive Christianity and The Christian Alliance For Progress are two such groups that have formed to promote the cause.

Members of the Christian Left who work on interfaith issues are part of building the Progressive Reconstructionist movement.

The Christian Left sometimes differs from other Christian political groups on issues including homosexuality. This is often not a matter of different religious ideas, but one of focus — viewing the prohibitions against killing, or the criticism of concentrations of wealth, as far more important than social issues emphasized by the religious right, such as opposition to homosexuality. Some on the Christian Left believe homosexual sex to be immoral but largely unimportant[citation needed] when compared with issues relating to social justice, or even matters of sexual morality involving heterosexual sex.

Some consider discrimination and bigotry against homosexuals to be immoral. Some (but not all) of these members of the Christian Left affirm that some homosexual practices are compatible with the Christian life and believe common biblical arguments used to condemn homosexuality are misinterpreted. Such views hold that the prohibition was actually against a specific type of homosexual sex act, pederasty or the sodomizing of young boys by older men. Thus, it is irrelevant when considering modern same-sex relationships.[3][4][5][6]

A related strain of thought is the (Catholic and progressive evangelical) Consistent Life Ethic, which sees opposition to capital punishment, militarism, euthanasia, abortion and the global unequal distribution of wealth as being related. It is an idea with certain concepts shared by Abrahamic religions as well as Buddhists, Hindus, and members of other religions. The late Cardinal Joseph Bernardin of Chicago developed the idea for the consistent life ethic in 1983.[7] Currently, Sojourners is particularly associated with this strand of thought.

Liberation theology, (not to be confused with the completely unrelated Black Liberation Theology), is a strain of Christian Left thinking that has developed in the developing world, especially Latin America. Since the 1960s, Catholic thinkers have integrated left-wing thought and Catholicism, giving rise to Liberation Theology. It arose at a time when Catholic thinkers who opposed the despotic leaders in South and Central America allied themselves with the communist opposition. However, the Vatican decided that, while Liberation Theology is partially compatible with Catholic social teaching, certain Marxist elements of it, such as the doctrine of perpetual class struggle, are against Church teachings. 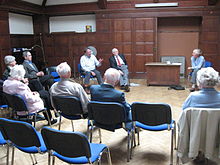 A meeting of the Oxford Branch of the Christian Socialist Movement, with Larry Sanders speaking, October 2007.

The medieval Lollards, particularly John Ball, took up many anti-establishment causes. During the English Civil War many of the more radical Parliamentarians, such as John Lilburne and the Levellers, based their belief in universal suffrage and proto-socialism on their reading of the Bible. Other people on the Christian left include:[citation needed]

Parties of the Christian left

A number of movements of the past had similarities to today's Christian Left: