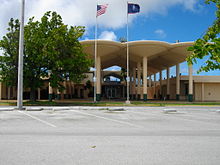 Continental Micronesia, Inc. is a wholly owned subsidiary of Continental Airlines. It operated daily flights to Honolulu, Hawaii, as well as international services to Asia, Micronesia and Australia from its base of operations at Antonio B. Won Pat International Airport on Guam,[4] a U.S. territory in the western Pacific Ocean. The airline, a Delaware corporation,[5] is headquartered in the old terminal building at Antonio B. Won Pat International Airport and in Tamuning, Guam.[3][6]

Arrival of United Nations Visiting Mission, Majuro, 1978. Sign reads "Please release us from the bondage of your trusteeship agreement." An Air Mike Boeing 727 is in the background.

The airline was established by Continental and other regional shareholders in the former U.S. Trust Territory and started operations on May 16, 1968 as Air Micronesia,[7] hence the nickname and callsign "Air Mike". Service was started with a Boeing 727-100, number 475, which was nicknamed "Ju-Ju," and a Douglas DC-6. It also operated two Grumman SA-16/ HU-16 Albatross amphibians to fly from Chuuk (Truk) to Pohnpei (Ponape), until an airfield could be built that could accommodate the 727. The 727's underside was coated with teflon, due to it having to operate on coral runways. Additionally, the plane had to carry spare parts and a mechanic, as well as open-water survival gear and (beginning in 1975) onboard doppler radar, then a rarity.[citation needed]

William H. Stewart of the Saipan Tribune stated that the airline's foundation "in particular" "was probably the single most important factor in the future development of what were once remote and isolated islands in the Pacific." Stewart added that the jets "distorted the traveler's impression of time and distance and brought the islands closer to major market areas in Asia."[8] The airline had a virtual monopoly in the Micronesia region.[9] In the 1970s, each district that the airline flew to had an entirely Micronesian employee base, with the exception of Saipan, which housed the airline's headquarters.[10] William H. Stewart of the Saipan Tribune said the airline "was the only travel link many had with the world beyond the horizon."[11]

In the early 1980s the airline started service from Guam to Japan. As Continental's share and roles in Air Mike changed, the airline's name became "Continental Air Micronesia."[citation needed] Continental now owns 100% of Air Mike, which today provides the only scheduled service directly between Guam and any point in the 50 United States (namely, to/from Honolulu, Hawaii).

Before being headquartered in Guam, Continental Micronesia was headquartered in Saipan, Northern Mariana Islands.[12] As time passed, the airline's general traffic to and from Saipan had decreased due to the breakup of the Trust Territory of the Pacific Islands; because the territory was subdivided into smaller political units, fewer people needed to travel to Saipan, the former capital of the trust territory.[9] 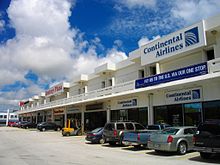 As of 2004 most of the airline's employees are Guam-based, due to the location of the corporate headquarters and the airline's main hub.[15] By 2005 Continental Micronesia's business on the island of Saipan had decreased, prompting layoffs in Saipan on October 4, 2005. According to an official from Continental Micronesia, Continental Airlines planned to offer positions for laid-off Saipan employees in Guam and in Houston.[16]

In 2008 Continental Micronesia generated profits. Chad Blair of the Pacific Business News said that the airline did so because it "nurtured" its "niche" Guam-Honolulu route. In addition Japanese tourists, wanting to save money, decided to travel to locations closer to Japan for vacation, so Continental Micronesia gained Japanese passengers. As of that year the airline's annual payroll in Guam was $90 million.[13]

A Houston Chronicle article in May 2008 stated that expected subsequent military buildup and population growth could lead to an expansion of Continental Micronesia flights to and from Guam.[19] However, on June 12, 2008, Continental's announcement of cuts of services, routes and destinations due to high fuel prices [20] included termination of flights to Hong Kong (which has since resumed) and Bali. Also among the cuts is the termination of the Saipan-Manila flights on July 15 which is the last remaining Air Mike flight for Saipan, the airline's original hub 40 years ago.[21] According to Jaime R. Vergara of the Saipan Tribune, the declared reason for the cancellation of the Saipan-Manila route was the fact that NCLEX tests were now available in Manila, so Filipino nurses no longer had to travel to Saipan to take the test. Before the flight's cancellation, the flight also served medical referrals from the Commonwealth of the Northern Mariana Islands to Manila and non-USA visa alien contract workers who were unable to transit to their final destinations via Guam; Vergara said that the alien workers "particularly were Air Micronesia’s captive audience."[9] With only Continental Connection/Cape Air services left, Continental closed its Saipan city ticket office on the same day.[21] 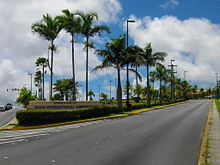 Beside providing transportation within Micronesia and between the region and the United States, Continental Micronesia flew to cities in Japan (the region's main source of tourists) and other Pacific Rim destinations.

The airline flew to nine Japanese cities, more than any other U.S. carrier.[23] The airline also operated a five stop "island-hopper" route between Honolulu and Guam. The 4,300-mile (6,900 km) route had an average duration of 14 hours and 10 minutes. Due to the special requirements of the route, each aircraft flying on this route houses an extra pilot, an extra flight attendant, a mechanic, and extra spare parts in case of a mechanical failure. Historically the airline received little competition on the "island-hopper" route. Continental Micronesia provided the only scheduled jet service in the Federated States of Micronesia and Majuro, Marshall Islands.[13] The airline's route network linked to the network of its parent company at Honolulu, Hong Kong, and Tokyo.[23]

Due to small island populations and the corresponding amount of passenger traffic, many of Continental Micronesia's routes were flown less than daily (some as infrequent as twice weekly). The only routes with daily flights were between Guam and Fukuoka, Honolulu, Manila, Nagoya, Palau, and Tokyo.

Unlike mainland Continental flights, Continental Micronesia continues to offer complimentary meals and snacks on virtually all of its flights, with specific services determined by mealtimes.[26] The airline offered soft drinks that were free on all flights. Beer, liqueurs, spirits, and wine were all free of charge in BusinessFirst and Business Class on all flights, and for a charge in economy class on all flights.[27] Special meals for customers who desire specific dietary options are available on all Continental Micronesia flights; special meals include the Child, Gluten intolerant, Hindu vegetarian, Jain, Kosher, Muslim, and Vegan options.[28]