Concesionaria Vuela Compañía de Aviación, S.A. de C.V., operating as Volaris, is a low-cost airline from Mexico, and the country's second largest airline after Aeroméxico, thus being a leading competitor in the Mexican domestic market, with a market share of around 13-14% of domestic traffic.

Volaris' headquarters are located in Santa Fe, Álvaro Obregón, Mexico City,[1] and its operational base is located at the Lic. Adolfo López Mateos International Airport (TLC) in Toluca.

A Volaris Airbus 319 parked at Terminal 2 at Cancún International Airport.

The pre-operations phase (founding of the legal entities and setting up of the required infrastructure) started in August 2005 under the name Vuela Airlines. Major initial shareholders of the company were Grupo Televisa (the world's biggest Spanish language media conglomerate), Inbursa (an insurance company owned by billionaire Carlos Slim), TACA and the Discovery Americas Fund. Each of these partners invested 25% of the initial cost of activities, or 100 million USD. On July 2010[2], it was announced that Televisa and Inbursa had sold their stake in Volaris leaving the ownership of Volaris as follows: TACA with Roberto and Maria Cristina Kriete (50%), Investment fund Discovery Americas (over 25%) and Indigo Partners: Fund led by former America West CEO B. Franke. Ticket sale started on January 12, 2006, and the first (non-commercial) flight was operated in February 2006, following the delivery of the airline's first aircraft. Scheduled revenue flights were launched on March 13, 2006, with the inaugural flight having been operated from Toluca to Tijuana. The airline has been received well on a number of areas including fares, fleet, service and on time service. However, if a flight is delayed for more than 30 minutes, passengers are given free, transferable tickets for use on any destination on their next purchase. If check-in lasts more than 10 minutes after passing the waiting line, passengers are given a discount coupon for their next purchase.

Initially, the airline avoided flying to Mexico City because of its congested and expensive airport. The airline took over several slots formerly owned by defunct Mexicana and its subsidiaries MexicanaClick and MexicanaLink, establishing service in September 2010.

On February 20, 2011, the airline celebrated its fifth anniversary.

On March 8, 2011, Volaris announced that its hub in Toluca will move to Guadalajara.

In April 2009, Volaris announced the start of US-bound flights out of Toluca and Guadalajara (initially to Los Angeles and Oakland) to feed into the hubs of Southwest Airlines. Later on, US-flights were also offered from Zacatecas and Morelia, with Monterrey-Los Angeles (and further routes, especially to Fresno Yosemite International Airport) in planning.

On February 25, 2011, it has announced that Volaris will acquire Mexicana de Aviacion's destination, Fresno Yosemite International Airport and will begin on April 14, 2011. Fresno will be Volaris' first destination to fly without partnering with Southwest Airlines. As of February 28, 2011, the airline is slated to serve an American gateway hub at Guadalajara International Airport in late 2011.

Volaris currently has a codeshare agreement with: 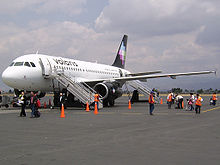 A Volaris Airbus A319 at Toluca Airport.

As of June 2011, the Volaris fleet consists of the following aircraft with an average age of 4.3 years:[4]

Volaris selected the International Aero Engines V2500 engines for its Airbus fleet, similar to those selected by TACA.[citation needed]

Volaris has been received well on a number of areas including fares, fleet, service and on time service. If a flight is delayed for more than 30 minutes, passengers are given free, transferable tickets for use on any destination on their next purchase. If queuing for check-in lasts more than 10 minutes, passengers are given a discount coupon for their next purchase.