Benito Juárez International Airport (Spanish: Aeropuerto Internacional de la Ciudad de México Benito Juárez or AICM), (IATA: MEX, ICAO: MMMX) in Venustiano Carranza, one of the sixteen boroughs into which Mexico's Federal District is divided, is a commercial airport that serves Mexico City, the capital of Mexico. It is Mexico's busiest airport by both passenger traffic and aircraft movements. Although this was not its official name for several decades, it was formally named after the 19th century president Benito Juárez in 2006, and is Mexico's main international and domestic gateway. The airport is owned by Grupo Aeroportuario de la Ciudad de México and operated by Aeropuertos y Servicios Auxiliares, the government-owned corporation, who also operates 21 others airports through Mexico. In recent years Toluca Airport has become an alternate airport.

This hot and high airport is served by 32 domestic and international airlines and offers direct flights to more than 100 destinations worldwide. In 2010, the airport served 24,130,535 passengers. In optimal conditions, and with the current renovations and expansion projects completed, the Benito Juárez airport will be able to handle up to 32 million passengers per year.[3] It provides non-stop services from Mexico City to North America, Central America and Caribbean, South America, Europe and Asia (Aeromexico is the only airline that flies to Asia from Mexico City).

As the main hub for Mexico's largest airline Aeroméxico and a secondary hub for its subsidiary Aeroméxico Connect, the airport has become a SkyTeam hub. It is also a hub for Aeromar, Interjet and a focus city for VivaAerobus and Volaris.

Mexico City International Airport is the Latin America's second busiest airport by passenger traffic after Guarulhos Airport in São Paulo, Brazil and the busiest airport by aircraft movements. The airport houses a wide variety of lodging options for its passengers, including hotels inside Terminal 1 (the Hilton Hotel and the Camino Real, and the Fiesta Inn), as well as a NH Hotel at Terminal 2.

The airport is 5 km. east from central Mexico City. The airport is surrounded by the built-up areas of Gustavo A. Madero to the north and Venustiano Carranza to the west, south and east. As the airport is east Mexico City and its runways run southwest-northeast, and airliner's landing approach is usually directly over Mexico City. Therefore, there is an important overflying problem.

The airport first opened as Balbuena Military Airport with five runways. The first landing was on November 5, 1928 and regular service started a year later, but was officially inaugurated on May 15, 1931. Its first international route was to Los Angeles International Airport operated by Mexicana. President Miguel Alemán opened the terminal in 1952, thus becoming a commercial airport. In the 1970s, president Luis Echeverría closed three runways and gave that land to poor people in order to build their homes, leaving just two parallel runways. In 1980, the terminal was expanded to double its capacity, using a single large terminal rather than multiple terminals as in other airports. Ten years later in 1990, the mixed domestic/international gates were separated to increase the terminal's functionality, along with the separation of domestic and international check-in halls.

In 2001, the east wing of the terminal was opened as an international final call waiting area and was mainly used by SkyTeam members. Because of the increasing demand, president Vicente Fox announced the construction of a new, larger airport on 5,000 hectares (12,000 acres) in the municipalities of Texcoco and San Salvador Atenco, but when local violent protests aroused, the new airport was cancelled. Instead, he launched a program called Expansion of Mexico City Airport to its Maximum Capacity in 2002 to increase the airport's capacity. The whole terminal was expanded and upgraded with new check-in halls, 13 more baggage claim belts, the construction of Departures and Arrivals floors, construction of several new taxiways and a whole new terminal opposite of the original, thus breaking the single terminal concept. The project was started with an initial investment of $200,000,000 MXP. Nevertheless, its final cost was $800,000,000 MXP. The original quasi-Terminal 2, which only housed Aeromar's operations in and out the airport was demolished, and the new Terminal 2 was built in less than two years.

Lack of capacity and slot restriction 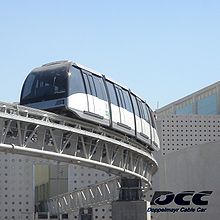 The airport has suffered from a lack of capacity due to restrictions for expansion, since it is located in a densely-populated area. Some analysts have reported that if the airport had grown at the same speed as demand, it would now serve over 40 million passengers annually. The main issue with the airport is the limitation that its two runways provide, since they are used at 97.3% of their maximum capacity, leaving a very short room for new operations into the airport. Only government, military, commercial and specially authorized aircraft are allowed to land at the airport. Private aircraft must use alternate airports, such as Lic. Adolfo Lopez Mateos International Airport in Toluca, General Mariano Matamoros Airport in Cuernavaca or Hermanos Serdán International Airport in Puebla. Even with the inauguration of the new Terminal 2, the airport would be ideally designed to serve around 18 million passengers per year, according to the international standards for runway and terminal usage. Instead, the airport will keep increasing the number of passengers from around 26 million passengers in 2008 at a rate of 16% per year.

Terminal layout after T2 was built

Mexico City International Airport has two passenger terminals. Terminal 1 is separated from the other by the runways. Terminal 2 is connected to Terminal 1 by the Aerotrén monorail system in which only connecting passengers with hand baggage are allowed to use with their boarding pass. Technical and cabin crew can also use it. Normal operation hours are from 5:00 am to 11:00 pm, every day of the year, and the first run always begins from T2 to T1; the last run of the day is to T2. The distance between the terminals is 3 km. and the Airtrain's speed is 45 km. per hour. The Airtrain journey, once the doors are fully closed therefore takes approximately 4 minutes and 40 seconds between stations in both directions. Also, if you arrive as a train is leaving the maximum waiting period for the next train is 11 minutes. Also there is a land service between terminals called "inter-terminal transportation". These buses are located at entrance no. 6 of Terminal 1 and entrance no. 4 of Terminal 2.

Mexico City's Terminal 1 is currently the largest airport terminal in the Americas and the fourth largest in the world.

Terminal 2 is now housing all Aeroméxico flights out of the airport, becoming the airline's main distribution center. Although the terminal was intended to be served by all-SkyTeam member airlines, Air France and KLM decided to remain at Terminal 1. 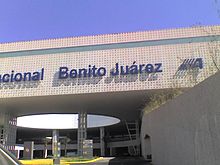 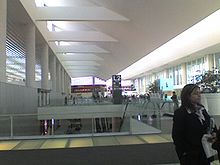 Terminal 2 Hall L2 in the foreground, Hall L1 in the far background. 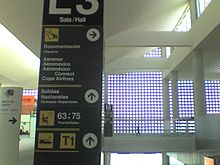 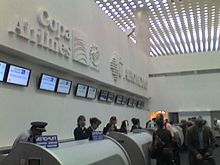 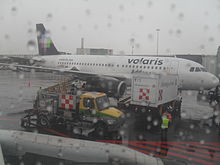 A Volaris A319 parked at Terminal 1 on a rainy day.

Individuals aircraft spotting from a spot adjacent the taxiways

The airport is served by the Terminal Aérea Metro station, which belongs to Line 5 of the subway, running from Pantitlán station to Politécnico station. It is located just outside the T1's national terminal.Terminals 1 and 2 have two land terminals operating 24 hours a day, 365 days a year. Different bus lines operate from here [2], and provide continuous transportation services to the main cities located around Mexico City, such as Córdoba, Cuernavaca, Pachuca, Puebla, Querétaro, Tlaxcala and Toluca. The Terminal 1 land terminal is located in front of the international area vehicular ramp and its facilities include various services for the comfort of the passengers. Among others, it offers VIP lounges, internet, resting, reading and meeting halls. The Terminal 2 land terminal is located at gate D, between entrance 4 and the national arrival passenger exit, and its facilities include resting halls and a fast food area.

Taxis are in operation in Terminals 1 and 2 and there are two models of service: Ordinary service in a sedan type vehicle for 4 passengers. Executive service in 8 passengers vans. At present there are 5 taxi groups in operation. These are the only taxis authorized by the Ministry of Communications and Transport (SCT) of the Federal Government. The Terminal 1 taxi boarding areas are located at entrances 1 and 10; and in Terminal 2, boarding areas are located at entrances 3 and 4. Taxi rates are registered under the SCT and include passenger insurance, civil liability and medical expenses for all occupants. To receive the taxi service you must purchase the corresponding ticket previously at the authorized sale points located within the airport.