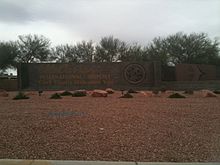 McCarran International Airport (IATA: LAS, ICAO: KLAS, FAA LID: LAS) is the principal commercial airport serving Las Vegas and Clark County, Nevada, United States. The airport is located five miles (8 km) south of the central business district of Las Vegas, in the unincorporated area of Paradise in Clark County. It covers an area of 2,800 acres (1,100 ha) and has four runways. McCarran is owned by Clark County and operated by the Clark County Department of Aviation (DOA). McCarran Airport serves as a hub for Great Lakes Airlines. It serves as a focus city for Allegiant Air and Southwest Airlines; McCarran is also the largest operation base for both Allegiant and Southwest. It is named after the former Nevada Senator Pat McCarran.

In 2010, McCarran ranked 22nd in the world for passenger traffic, with 39,757,359 passengers passing through the terminal.[4] The airport ranked 9th in the world for aircraft movements with 505,591 takeoffs and landings.[2] McCarran and the DOA are completely self-sufficient enterprises, requiring no money from the County's general fund.[5]

As of November 2009, Southwest Airlines operated more flights out of McCarran than at any other airport. Southwest also carries the most passengers in and out of McCarran. Southwest currently operates out of 21 gates, primarily in Concourse C. Since 2008, Canadian airline WestJet has become the largest international carrier at McCarran.[6]

McCarran Airport has more than 1,234 slot machines throughout the airport terminals. The slots are owned and operated by Michael Gaughan Airport Slots. Reno/Tahoe International Airport also has 251 gambling machines both airside and landside.[8]

Maximum capacity for the airport is estimated at 53 million passengers and 625,000 aircraft movements. As McCarran is predicted to reach this capacity around 2017, Ivanpah Airport is planned as a relief airport.[9] 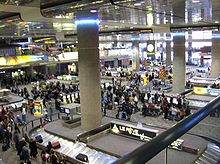 American aviator George Crockett, a descendant of frontiersman Davy Crockett, established Alamo Airport in 1942 on the site currently occupied by McCarran International. In 1948, Clark County purchased the airfield from Crockett to establish the Clark County Public Airport, and all commercial operations moved to the site of this airport. On December 20, 1948 the airport was renamed McCarran Field for U.S. Senator Pat McCarran, a longtime Nevada politician who authored the Civil Aeronautics Act and played a major role in developing aviation nationwide.

By this time, the airport was serving 1.5 million passengers a year, the location for the present terminals was moved from Las Vegas Boulevard South to Paradise Road, opening in March 1963.[10] The terminal, designed by Welton Becket and Associates and John Replogle, was inspired by the TWA terminal at JFK.[10] It ultimately became the basis for the United Airlines terminal at O'Hare International Airport seven years later.

In 1978, Senator Howard Cannon pushed the Airline Deregulation Act through Congress. Airlines no longer had to get the federal government's permission to fly to a city, but instead dealt directly with airports to establish additional routes. Just after deregulation, the number of airlines serving McCarran doubled from seven to 14.

An expansion plan called McCarran 2000 was adopted in 1978 and funded by a $300 million bond issue in 1982. The three-phase plan included a new central terminal; a nine-level parking facility; runway additions and expansions; additional gates; upgraded passenger assistance facilities; and a new tunnel and revamped roadways into the airport. The first phase of McCarran 2000 opened in 1985 and was completed by 1987.

Between 1986 and 1997, Terminal 2 was built where two separate terminals had been in the 1970s and 1980s; one for American Airlines and the other for Pacific Southwest Airlines.

In the 1990s all gates and check in counters were upgraded to use a common set of computer hardware. CUTE, Common Use Terminal Equipment. This eliminates the need for each airline to have their own equipment and allows the airport to reassign gates and counters without having to address individual airlines' computer systems. While portions of Los Angeles International Airport and San Francisco International Airport deployed CUTE prior to McCarran, as of 2008 it remains the only major airport in the USA that is 100 percent common use. (White Plains, N.Y., is also a 100 percent common use airport, though it has only eight gates.) McCarran's CUTE system also supports several airlines' use of the Cockpit Access Security System, or CASS. In Europe, and to some extent the Asia-Pacific rim, CUTE has been widely prevalent for much longer.

In 1998, the D Gates SE and SW wings opened adding 28 gates. The D Gates project is a modification to the original McCarran 2000 plan.

On October 16, 2003, the airport installed SpeedCheck kiosks which allow customers to obtain a boarding pass without having to go to a specific airline kiosk or counter. McCarran was the first airport in the US to provide this service and the first in the world to provide the service to all airlines from a single kiosk.[11][12][13] At the same time, 6 kiosks were activated at the Las Vegas Convention Center allowing convention attendees to get boarding passes on their way to the airport.[11] This system was enhanced to add printing of baggage tags in 2005. 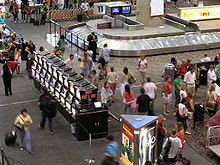 Slot machines at the baggage claim

In 2003 the airport announced it was implementing a baggage-tracking system that will use Radio-frequency identification (RFID) bag tags from Matrics Inc. to improve air safety. The decision to implement the tracking system makes McCarran one of the first airports to use the RFID technology airportwide.

On January 4, 2005, the airport started offering wireless internet service at no charge. The signal is available in the boarding areas and most other public areas. While not the first airport to offer free WiFi throughout the entire facility,[14] the airport was perhaps the first major airport with free WiFi throughout[citation needed]. At the time, this was the largest (2 million square feet (180,000 m²)) free wireless Internet installation in the world.[15]

On April 4, 2007, the consolidated rental car facility opened, located 3 miles (5 km) from the terminals (see Transportation section). The distance from the airport (including a segment of US Interstate 215) requires the facility be permanently linked via bus to the airport.

In 2008, the D Gates NW wing opened with additional 9 gates.

Due to Continental Airlines moving into the Star Alliance, along with cost-cutting moves at US Airways because of the 2008 night-flight hub closure, the US Airways Club was closed on September 13, 2009. All passengers flying on US Airways or United Airlines can access the Presidents Club in Concourse D starting on October 25.[16] Delta Airlines' Crown Room lounge had previously closed in 2001.

The US Airways night-flight hub operation, established in 1986 by predecessor America West Airlines, made the carrier McCarran's second busiest airline. Due to the 2008 energy crisis the night hub was closed in September 2008. US Airways closed its crew base on January 31, 2010.[17] On August 31, 2011, US Airways announced that it will keep shrinking its operations by cutting 40% of its flights out of Las Vegas. The airline plans to eliminate nonstop service to Boston, Dallas/Fort Worth, Fresno, Los Angeles, and San Francisco by early 2012 leaving the airline with only flights from Las Vegas to its 3 hubs in Charlotte, Philadelphia, Phoenix, and its focus city Washington Reagan National Airport.[18] 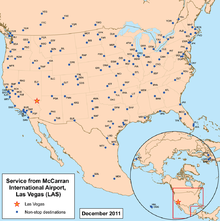 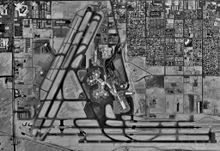 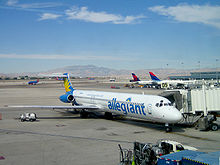 At McCarran, there is a terminal devoted to cargo airline operations for:

Aviacsa had an office on the airport property.[31]

Ground transportation to McCarran Airport is from Tropicana Avenue (State Route 593) to the north or the Las Vegas Beltway (Interstate 215) to the south. Vehicles enter the airport via the McCarran Airport Connector, which includes Paradise Road/Swenson Street and the airport tunnel.

The airport is served by taxicabs operated by various firms. The airport is further served by RTC Transit, the public bus service of the Las Vegas valley. RTC buses stop at Terminal 1 outside the Zero Level.[32]

The Consolidated Rental Car Facility, located 3 miles (4.8 km) from the airport at 7135 Gilespie Street, provides 5,000 parking spaces on 68 acres (280,000 m2) of land. A fleet of 40 buses provides free transportation from the terminals to the facility, which upon opening housed 11 car rental companies.[33] The Facility is not accessible by foot from the Strip. It is accessed by customers primarily via US Interstate 215, or by bus. Rental firms strongly advise customers to allow additional time to account for locating and driving to the facility, and the bus ride back to the airport. Advantage, Savmore, Payless, and Enterprise use an access control system based on single-use bar codes.[34] Participating agencies issue a slip similar to a slot-machine voucher which activates vehicle anti-theft devices in the rental lot, permitting the single vehicle to exit the lot.

As the airport continues through the process of upgrading and expanding.

The new $1.6 billion Terminal 3 will be built in one phase. Its planned opening in June 2012 will provide 14 additional gates, including six designated for international travelers. Once the terminal opens, McCarran will have 117 gates. Like Terminal 2, it will be all inclusive providing bag claim, ticketing and parking facilities. Upon completion of Terminal 3, Terminal 2 will close permanently.

Terminal 3 will be the future home of all foreign flag carriers, Alaska Airlines, Frontier Airlines, JetBlue Airways, Sun Country Airlines, and Virgin America. Hawaiian Airlines and United Airlines will have ticketing and baggage claim facilities at Terminal 3, but will continue to operate in Concourse D. [1] In addition, it is speculated that the other airlines operating in Concourse D will have their ticketing facilities split between Terminal 1 and Terminal 3.

A plan to extend the Las Vegas Monorail to McCarran is under consideration. This proposed extension will add underground stations at Terminal 1 and at Terminal 3.[35] The part of the extension north of the airport will be elevated. This expansion is opposed by taxi and limousine services who garner significant revenues shuttling the public to and from the airport.[36]

The Howard W. Cannon Aviation Museum is located on the Esplanade, Level 2, above the baggage claim area. This small museum is open 24 hours a day, seven days a week, and concentrates on Las Vegas airline history. Items on display include a copy of the first emergency vehicle that was used on the airfield. Admittance is free. A small branch of the museum is located at the D gates, and some of the other concourses and check-in areas also have small displays. The current curator of the museum is Mark Hall-Patton, a 20th century historian and administrator of the Clark County Museum, who has frequently appeared as an appraisal expert on the reality television series, Pawn Stars.[37][38]

Some of the public art displays in McCarran Airport includes:

On July 12, 2008, Continental Airlines added a Presidents Club in Terminal 1, Concourse D located between gates 33 and 35 on the 3rd floor. This club is open from 5:30 AM to 12:30 AM daily. All US Airways Club, in addition to United Airlines Red Carpet Club members can use the Presidents Club in Concourse D.