Metrobús is a bus rapid transit (BRT) system in Mexico City, Mexico. It comprises 3 lines that traverse the city and connect with other forms of transit. It was officially opened to the public with service along Line 1 on 19 June 2005. Line 2 opened on 16 December 2009,[2] and Line 3 opened on 8 February 2011.[3]

The first line covers a distance of up to 30 kilometres (19 mi), running in a dedicated bus-lane built within the central reservation (median) of Avenida de los Insurgentes.[4] Avenida Insurgentes is one of the city's main north-to-south arterial routes, constitutes a section of the Pan-American Highway, and is reputed to be the longest urban avenue in the world.

This line starts at Metro Indios Verdes, a large multimodal transport node in the Gustavo A. Madero borough. From there it runs south, through Cuauhtémoc and Benito Juárez, before terminating in the La Joya[disambiguation needed

] district of Tlalpan borough, providing a total of 45 stations. It was built in two sections, with a split at Metro Insurgentes, the notional dividing point between the avenue's northern and southern stretches, just south of where Avenida Insurgentes intersects with Paseo de la Reforma. 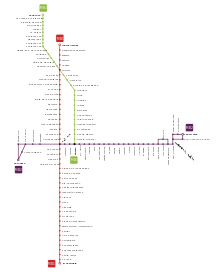 Line 3 runs 17 kilometres (11 mi) from Tenayuca northwest of the city southward to Etiopía II, where there is connection to Metrobús Line 2 as well as the Metro Etiopía station.[3]

The MB operates from 04:30 to 24:00 (midnight) Monday through Friday, and from 05:00 to 24:00 on Saturdays, Sundays and Holidays. Hours for individual stations may vary in the mornings.[1] A flash-based map of the system is available at the Metrobús website.[5]

The Mexico City Metrobús was opened along the northern most portion of Line 1 on 19 June 2005.[4] Initial service was from Metro Indios Verdes south to Metro Insurgentes. This was quickly followed by a southward expansion from Metro Insurgentes to MB station Doctor Gálvez, bringing the line length up to 20 kilometres (12 mi). Many of the stations along Line 1 feature cantilevered glass canopies designed by architect Carlos Monge.[6]

The system replaced 372 standard buses and microbuses that served Avenida de los Insurgentes with 212 articulated buses that run at an average speed of 20 km/h (12 mph), doing 60 km/h (37 mph) as maximum. Doing so, travel times along the corridor are reduced up to 50%.[citation needed]

According to information from the Mexico City government published in April 2006, the Metrobús carried more than 260,000 passengers daily. 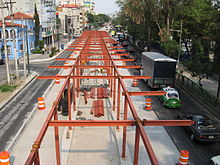 MB station Xola under construction near the intersection of Eje Central and Eje 4 Sur, 25 August 2008

The original Line 1 was expanded with the inclusion of nine new stations in order to achieve full coverage of Avenida Insurgentes. The southward expansion of service along Line 1 started service on 13 March 2008 and brought the line's length up to 30 kilometres (19 mi).[4]

A second Metrobús line was also built in 2008, running west to east along Eje 4 Sur. This second line connects Metro Tacubaya, Etiopía, Patriotismo and with the Insurgentes Metrobús at its Nuevo León stop, and was opened on 16 December 2009.[2]

In late 2010 the Head of Government of the Federal District Marcelo Ebrard announced a plan to build a new Metrobús Line 4 that would run from near Buenavista Station in the west of the city eastward towards Mexico City International Airport.[9] Construction on Line 4 started on 4 July 2011,[10] although the start of construction was met with some protest from residents and business owners along the proposed route.[11]

The plans for Line 4 include a two step construction process with the first 28 kilometres (17 mi) operational segment to be built between Buenavista and Metro San Lázaro.[12] A later extension would provide travel between San Lázaro and the Airport.[12] Instead of travelling along a single avenue or axis road Line 4 traffic will circulate around the Centro Histórico.[12] To navigate the turns and narrow streets in and near the Centro Histórico Line 4 will use 12-metre (39 ft) long light buses instead of the 18-metre (59 ft) articulated buses used on the other lines in the system.[12] The stations for Line 4 will appear more like conventional bus stops and will be built at curbside instead of within a dedicated portion of a central reservation as used on the other lines.[12] 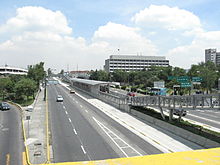 Southern section of Avenida de los Insurgentes seen from a bridge of the Periférico near the Perisur Mall, showing the Perisur MB station

Ticketing is by pre-paid proximity smartcard, which travellers have to pass through turnstiles at the entry to the separated bus platforms. During the early months of the system's operations, limited availability of the cards required a temporary method for access to the system involving purchasing a normal single-trip paper ticket at a cost of MXN$4.50. Starting in October 2005, and with smartcard supply able to cover the demand, access is done exclusively by using the card.

The smartcard system has generated controversy, especially from occasional and one-time users who complain about the MXN$15.00 fee for a single-voyage card, for this is common that sometimes people ask others who have the smartcard to charge for them a trip.

Service is free for those over 70 years old, or disabled, as well as for children under 5 accompanied by an adult.[13]

Official name (if any) in brackets. Metro stations in italics are the nearest, though not interconnected. 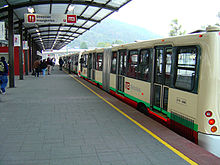