Jorge Chávez International Airport (IATA: LIM, ICAO: SPIM), known as Aeropuerto Internacional Jorge Chávez in Spanish, is Peru's main international and domestic airport. It is located in Callao, 11 kilometers (7 mi) from the Historic Centre of Lima and 17 km (11 mi) from Miraflores. Callao is the port city now fully integrated with Lima, the nation's capital. In 2008, the airport handled 8,288,506 passengers and 98,733 aircraft movements.[2] In 2009, the airport handled 8,786,973 passengers and 104,966 aircraft movements,[3] which although small, was one of the fastest increases in the Americas. Between January and November 2010 the airport handled 9,361,846 passengers[4] and by the end of 2010 the airport reached 10,278,493 passengers.[1] For many years it was the hub for now defunct Aeroperú and Compañía de Aviación Faucett, one of the oldest airlines in Latin America. Now it serves as a hub for many aviation companies.

The first airport of Lima was the Limatambo Airport, located in San Isidro, which ceased operations in 1960 due to lack of space and capacity to handle the increasing flights. In that same year, the Lima-Callao International Airport began to operate in Callao. In June 1965, the airport was renamed as "Aeropuerto Internacional Jorge Chávez" after Peruvian aviator Jorge Chávez Dartnell and in December 1965, the current terminal building was inaugurated.[5]

Over time, the airport showed signals of decay, lack of space for passengers and outdated technology in radar and safety.[citation needed] In 2001, in order to improve and expand its infrastructure, the airport was concessioned by the Peruvian government to Lima Airport Partners (LAP), now composed of Fraport and two other minor partners, retaining the air traffic control managed by the Peruvian Corporation of Airports and Commercial Aviation (CORPAC).[6]

In February 2005, the first phase of a new renovation and expansion project was completed, including the Peru Plaza Shopping Center and the new concourse. In June 2007 a four-star hotel opened in front of the terminal, 'Ramada Costa del Sol'. In January 2009, the second phase of the terminal expansion was inaugurated. Currently the terminal has 28 gates, 19 of them with boarding bridges. In August 2009, Jorge Chávez International Airport announced that they should receive a new ILS CAT III in 2010 to help with fog landings in Lima.[7] The construction of a second runway is another very important project and is scheduled to be completed in 2014. Tourism and commercial passenger traffic has increased in Peru dramatically, and it is predicted to double in 2011; this growth will be higher than anywhere else in Latin America.[8] 'Arquitectonica", a Miami-based architectural office and Lima Airport Partners set out to approved the construction of a second terminal and the further expansion of the main terminal.

The expansion and renovation of the airport has had a significant positive impact on the quality of services provided to passengers. In April 2010 it was presented the "Best Airport in South America 2010" award [9][10] by United Kingdom-based commercial aviation consultancy Skytrax[11] who presents the World Airport Awards annually after conducting surveys to 9.8 million airline passengers worldwide[12]

Best airport lounge in the world

In addition to the award presented by Skytrax, Priority Pass,[13] the world's largest independent airport access program, announced in March 2010 that Sumaq VIP Lounge[14] had been voted by its members "Lounge of the Year 2010"[15] for second consecutive year among 600 VIP lounges in the world.[16][17] 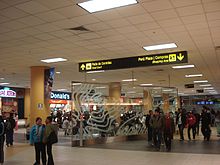 Hotel - Along with the airport expansion Lima Airport Partners added a four star hotel, 'Ramada Costa del Sol', right in front of the control tower and the arrivals exit. The Hotel is built with noise canceling panels as well as a Restaurant, a pool, business center, spa, beauty salon, gymnasium and a bar.

"Peru Plaza" Shopping Center - Located near the passenger terminal in the Grand Concourse, the expansion included a new shopping center with stores, restaurants, gyms, spa, and souvenir shops. Stores such as Lacoste, Tommy Hilfiger, Versace, Timberland and Esprit are located in the duty-free area of the concourse, this area will also be expanded by 2011.

Food Court - Located on the second floor, the food court has outlets of: Mcdonald's, Papa John's, Starbucks and others, there is also a Dunkin' Donuts next to the main entrance of the terminal. 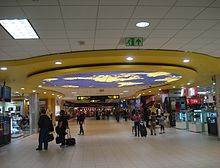 VIP lounges - Jorge Chavez Airport has various VIP Salons in the departures terminal, such as "VIP Peru", a luxury waiting room with bars, tables, and other amenities. For passengers in First class, there is an exclusive salon near the gates,"VIP Club". And renovated the "Sumaq VIP Lounge", a lounge exclusively for first and business class passengers nominated as the best VIP lounge of the year by the survey of the "Priority Pass" VIP Network.[18]

Transportation - Transportation between the airport and city is provided by taxis, tour buses and vans. For security reasons, visitors are recommended to take only those taxis offered by registered companies at the airport arrivals area.

Tourist information - Tourist Information is offered near International and domestic arrivals and departures, as well as informative material is given to direct tourists to the principal attractions of the country.

The airport has a terminal with two concourses; one for international flights and the another for domestic flights. 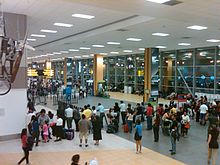 Jorge Chávez International Airport is home to Lima Cargo City, a hub for cargo airlines. The 35 million dollar project was completed and began operations on 12 May 2009. This cargo hub is big enough to hold up to twenty cargo airplanes at the same time.