Corsair S.A. trading as Corsairfly, is an airline based in Rungis, France.[1][2] It is currently the second largest French airline after Air France and operates international scheduled and charter services to 62 European destinations, the French overseas territories, Africa and North America. Its main base is Orly Airport, Paris[3]

The airline was established in 1981 and started operations on 17 May 1981 as Corse Air International. It was founded by the Corsican Rossi family and was acquired by Nouvelles Frontières, a French tour operator, in 1990 and the name was changed to "Corsair". Worldwide traffic rights were obtained in 1991. In 2000 TUI AG, one of the world's leading tour operator groups, took over Nouvelles Frontières. In 2004, Corsair aircraft were repainted with the colours of TUI, blue fuselage with the TUI-logo, like its sister airlines. At the end of 2005 the TUI Group, decided to rename all its affiliated airlines TUIfly. As an interim step Corsair aircraft were repainted with Corsairfly markings, although all airlines in the group are expected the common TUIfly brand by 2008.[3]

Beginning in 2008, the airline announced that it would look forward to expand its medium-haul network to the Mediterranean and its long-haul network to Canada and the United States (where it regularly flew in the 1990s), including the establishment of codeshare agreements with Air Canada.[5] The first destination in this expansion was Miami in June 2010, but the rest of the plan was later abandoned due to a change in the airline's strategy.

On 27 May 2010, Corsairfly announced a plan called "Takeoff 2012", aimed to modernise the airline. This plan includes a reduction of workforce by 25%, the replacement of 3 Boeing 747-400 by 2 Airbus A330-300 from TUI AG, the refurbishment of all aircraft cabins, leaving the charter flights market, and consolidation of routes (including dropping Kenya, Dominican Republic, Québec City, Moncton, Israël).[6][7] As of October 2010, the plan was pending union approval.[8] 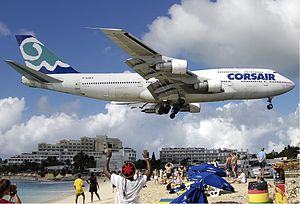 Corsairfly operates most of its flight from its hub at Paris-Orly although occasionally some flights do fly from other major French cities such as Lyon, Marseille and Toulouse

The Corsairfly fleet consists of the following aircraft (at July 2011):[9]