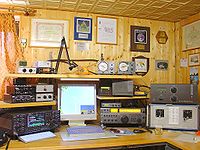 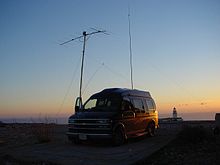 Most transceivers installed in vehicles are designed to run on 12-16 VDC, and are generally powered by the starting battery in the vehicle. Because of the power demands placed on the vehicle battery, most mobile stations either do not include external amplifiers or include amplifiers with power outputs that are more modest than those commonly found in fixed stations.

A specialized form of mobile station used for competition in a VHF amateur radio contest in North America is called a rover station. A rover station is often designed to be operated by a passenger in the vehicle rather than the driver, and may include multiple transceivers, transverters, directional antennas, and a laptop computer to log contacts made.

An amateur radio station set up in a temporary location is referred to as a portable station. A portable stations might be established to provide emergency communications in a disaster area, to provide public service communications during a large organized event such as a charity bicycle ride, to provide communications during an expedition, or for the recreational enjoyment of operating outdoors. Portable stations include the same basic equipment as fixed and mobile stations, although transportation of the transceiver, antennas, power supplies or batteries and necessary accessories often influences the particular selection. Equipment that does not weigh very much, or that can be broken down for shipment or transportation in luggage is especially popular with amateur radio operators travelling on DX-peditions.

Some portable stations append a /P to end of their call sign (pronounced as "slash portable") to indicate their status as a portable operation. In some countries, this is a regulatory requirement, whereas in others it is done at the option of the operator.

An amateur radio station that is located in a satellite, the Space Shuttle, or on the International Space Station is referred to as a space station. Some countries, including the United States, have additional or different regulations regarding the operation of space stations than other amateur radio stations. Most space stations are located on satellites that orbit the earth. These stations are frequently either transponders or repeaters that operate under automatic control and can be used by ground stations (any station that is not a space station) to relay their signal to other ground stations. 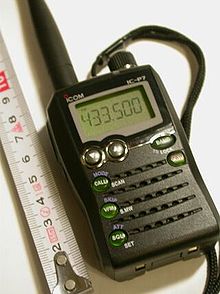 Handheld radios contain all the necessary equipment for radiocommunications with another station. A typical radio used as a handheld station integrates a transceiver with an antenna and a battery in one handheld package. Most handheld transceivers used in amateur radio are designed for operation on the VHF or UHF amateur radio bands and most often are capable of only FM voice communications transmissions. To conserve battery power, they have limited transmitter power, often below 1W, to cover a local range of typically a few km or miles.

An amateur radio repeater is a specialty amateur radio station that extends the range of communications for other stations. A repeater uses a receiver tuned to one radio frequency and a transmitter tuned to another radio frequency. Other stations using a repeater station transmit on one frequency but listen for signals on the other frequency. If a repeater station is in a favorable location, such as on a tall tower, the top of a tall building, or on a mountaintop, stations that otherwise would not be able to communicate with each other can each use the repeater and establish two-way communications.

During transmissions, an amateur radio station must identify itself with a call sign issued by the authorized regulatory authority of the country in which the station is located.