Repeater
This article is about the electronic device. For other uses, see Repeater (disambiguation). 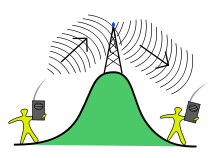 A repeater is an electronic device that receives a signal and retransmits it at a higher level and/or higher power, or onto the other side of an obstruction, so that the signal can cover longer distances.

The term "repeater" originated with telegraphy and referred to an electromechanical device used by the army to regenerate telegraph signals. Use of the term has continued in telephony and data communications.

In telecommunication, the term repeater has the following standardized meanings:

Because repeaters work with the actual physical signal, and do not attempt to interpret the data being transmitted, they operate on the Physical layer, the first layer of the OSI model.

A "digipeater" is a blend meaning "digital repeater", particularly used in amateur radio. Store and forward digipeaters generally receive a packet radio transmission and then retransmit it on the same frequency, unlike repeaters that receive on one and transmit on another frequency.

Repeaters are often used in transcontinental and submarine communications cables, because the attenuation (signal loss) over such distances would be unacceptable without them. Repeaters are used in both copper-wire cables carrying electrical signals, and in fiber optics carrying light.

Repeaters are used in radio communication services. Radio repeaters often transmit and receive on different frequencies. A special subgroup of those repeaters is those used in amateur radio.

Repeaters are also used extensively in broadcasting, where they are known as translators, boosters or TV relay transmitters.

When providing a point-to-point telecom link using radio beyond line of sight, one uses repeaters in a microwave radio relay. A reflector, often on a mountaintop, that relays such signals around an obstacle, is called a passive repeater or Passive Radio Link Deflection. A microwave repeater in a communications satellite is called a transponder.

Before the invention of electronic amplifiers, mechanically coupled carbon microphones were used as amplifiers in telephone repeaters. The invention of the audion tube made transcontinental telephony practical. In the 1930s vacuum tube repeaters using hybrid coils became commonplace, allowing the use of thinner wires. In the 1950s negative impedance gain devices were more popular, and a transistorized version called the E6 repeater was the final major type used in the Bell System before the low cost of digital transmission made all voiceband repeaters obsolete. Frequency frogging repeaters were commonplace in frequency-division multiplexing systems from the middle to late 20th century.