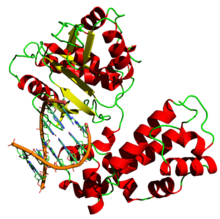 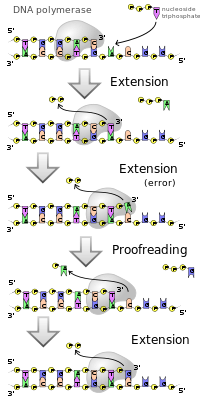 DNA polymerase can add free nucleotides to only the 3' end of the newly forming strand. This results in elongation of the new strand in a 5'-3' direction. No known DNA polymerase is able to begin a new chain (de novo). DNA polymerase can add a nucleotide onto only a preexisting 3'-OH group, and, therefore, needs a primer at which it can add the first nucleotide. Primers consist of RNA and/or DNA bases. In DNA replication, the first two bases are always RNA, and are synthesized by another enzyme called primase. An enzyme known as a helicase is required to unwind DNA from a double-strand structure to a single-strand structure to facilitate replication of each strand consistent with the semiconservative model of DNA replication.

DNA polymerases have highly conserved structure, which means that their overall catalytic subunits vary, on a whole, very little from species to species. Conserved structures usually indicate important, irreplaceable functions of the cell, the maintenance of which provides evolutionary advantages.

Some viruses also encode special DNA polymerases, such as Hepatitis B virus DNA polymerase. These may selectively replicate viral DNA through a variety of mechanisms. Retroviruses encode an unusual DNA polymerase called reverse transcriptase, which is an RNA-dependent DNA polymerase (RdDp). It polymerizes DNA from a template of RNA.

Based on sequence homology, DNA polymerases can be further subdivided into seven different families: A, B, C, D, X, Y, and RT.

Polymerases are still not very well characterized. All known examples are found in the Euryarchaeota subdomain of Archaea and are thought to be replicative polymerases.

Contains the well-known eukaryotic polymerase pol β, as well as other eukaryotic polymerases such as pol σ, pol λ, pol μ, and terminal deoxynucleotidyl transferase (TdT). Pol β is required for short-patch base excision repair, a DNA repair pathway that is essential for repairing alkylated or oxidised bases as well as abasic sites. Pol λ and Pol μ are involved in non-homologous end-joining, a mechanism for rejoining DNA double-strand breaks. TdT is expressed only in lymphoid tissue, and adds "n nucleotides" to double-strand breaks formed during V(D)J recombination to promote immunological diversity. The yeast Saccharomyces cerevisiae has only one Pol X polymerase, Pol IV, which is involved in non-homologous end-joining.

Y Polymerases differ from others in having a low fidelity on undamaged templates and in their ability to replicate through damaged DNA, known as translesion synthesis (TLS). Members of this family are hence called translesion synthesis polymerases. Depending on the lesion, TLS polymerases can bypass the damage in an error-free or error-prone fashion, the latter resulting in elevated mutagenesis. Xeroderma pigmentosum variant (XPV) patients for instance have mutations in the gene encoding Pol η (eta), which is error-free for UV-lesions. In XPV patients, alternative error-prone polymerases, e.g., Pol ζ (zeta) (polymerase ζ is a B Family polymerase a complex of the catalytic subunit REV3L with Rev7, which associates with Rev1[2]), are thought to be involved in mistakes that result in the cancer predisposition of these patients. Other members in humans are Pol ι (iota), Pol κ (kappa), and Rev1 (terminal deoxycytidyl transferase). In E. coli, two TLS polymerases, Pol IV (DINB) and Pol V (UmuD'2C), are known.

Eukaryotes have at least 15 DNA Polymerases.[3]