The Lockheed P-80 Shooting Star was the first jet fighter used operationally by the United States Army Air Forces.[2] Designed in 1943 as a response to the German Messerschmitt Me-262 jet fighter, and delivered in just 143 days from the start of the design process, production models were flying but not ready for service by the end of World War II. Designed with straight wings, the type saw extensive combat in Korea with the United States Air Force (USAF) as the F-80.

America's first successful turbojet-powered combat aircraft, it helped usher in the "jet age" in the USAF, but was outclassed with the appearance of the swept-wing transonic MiG-15 and quickly replaced in the air superiority role by the North American F-86 Sabre. The F-94 Starfire, an all-weather interceptor on the same airframe, also saw Korean war service. The closely related T-33 Shooting Star trainer would remain in service with the U.S. Air Force and Navy until the 1970s and many still serve in a military role or and in private hands in the present day.

The XP-80 was a conventional, all-metal airframe with a slim low wing and tricycle undercarriage (landing gear). Like most early jets designed during WWII (before the Allies captured German swept wing research data which showed the promise of much greater speeds), the XP-80 had straight wings, like previous propeller-driven fighters. It was the first operational jet fighter to have its engine in the fuselage, a design previously used in the pioneering Heinkel He 178 of 1939, and the slightly later Gloster E.28/39 demonstrator of 1941. Other early jets generally had two engines because of their limited power and mounted these in external pods for easier maintenance. With the advent of more powerful British Jet engines, fuselage mounting was more effective and would be used by nearly all subsequent fighter aircraft.

Concept work began on the XP-80 in 1943 with a design being built around the blueprint dimensions of a British de Havilland H-1 B turbojet (later called Goblin), a powerplant to which the design team did not have actual access. Lockheed's team, consisting of 28 engineers, was led by the legendary Clarence L. "Kelly" Johnson. This teaming was an early product of Lockheed's Skunk Works, which would surface again in the next decade to produce a line of high-performance aircraft beginning with the F-104. 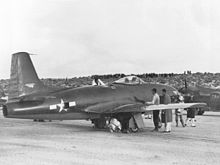 The impetus for development of the P-80 was the discovery by Allied intelligence of the Me 262 in spring 1943, which had only made test flights of production prototypes at that time. After receiving documents and blueprints comprising years of British jet aircraft research, the commanding General of the Army Air Forces, Henry H. Arnold, believed an airframe could be developed to accept the British-made jet engine, and the Materiel Command's Wright Field research and development division tasked Lockheed to design the aircraft. With the Germans and British clearly far ahead in development, Lockheed was pressed to develop a comparable jet in as short a time as possible. Kelly Johnson submitted a design proposal in mid-June and promised that the prototype would be ready for testing in 180 days. The Skunk Works team, beginning 26 June 1943, produced the airframe in 143 days, delivering it to Muroc Army Airfield on 16 November. After the Goblin engine had mated to the airframe, foreign object damage during the first run-up destroyed the engine, which delayed the first flight until a second engine (the only other extant)[3] could be delivered from Britain.[4]

The first prototype (44-83020) was nicknamed Lulu-Belle (also known as "the Green Hornet" because of its green paint scheme). Powered by the replacement Halford H1 taken from the prototype de Havilland Vampire jet fighter, it first flew on 8 January 1944, with Lockheed test pilot Tony LeVier at the controls. Following this flight, Johnson said, "It was a magnificent demonstration, our plane was a success - such a complete success that it had overcome the temporary advantage the Germans had gained from years of preliminary development on jet planes." The donated British Jet program data had no doubt proved invaluable.[citation needed] In test flights, the XP-80 eventually reached a top speed of 502 mph at 20,480 feet, making it the first USAAF aircraft to exceed 500 mph in level flight. 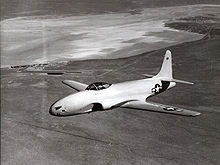 The second prototype, designated XP-80A, was designed for the larger General Electric I-40 engine (an improved Rolls-Royce Derwent, later produced by Allison as the J33). Two aircraft (44-83021 and 44-83022) were built. 44-83021 was nicknamed the Gray Ghost after its "pearl gray" paint scheme, while 83022, left unpainted for comparison of flight characteristics, became known as the Silver Ghost. The XP-80A's first test flight was unimpressive, but most of the problems with the design were soon addressed and corrected in the test program. Initial opinions of the XP-80A were not positive, with Lockheed Chief Engineering Test Pilot Milo Burcham commenting an aircraft he very much enjoyed (powered by the Halford engine) had now become a "dog." The XP-80As were primarily testbeds for larger, more powerful engines and intake duct design, and consequently were larger and 25% heavier than the XP-80.

The P-80 testing program proved very dangerous. Burcham was killed on 20 October 1944 while flying the third YP-80A produced, 44-83025. The Gray Ghost was lost on a test flight on 20 March 1945, although pilot Tony LeVier escaped. Newly promoted to chief engineering test pilot to replace Burcham, LeVier bailed out when one of the engine's turbine blades broke, causing structural failure in the airplane's tail. LeVier landed hard and broke his back, but returned to the test program after six months of recovery. Noted ace Major Richard Bong was also killed on an acceptance flight of a production P-80 in the United States on 6 August 1945. Both Burcham and Bong crashed as a result of main fuel pump failure. Burcham's death was the result of a failure to brief him on a newly installed emergency fuel pump backup system, but the investigation of Bong's crash found he had apparently forgotten to switch on this pump, which could have prevented the accident. He bailed out when the aircraft rolled inverted but was too close to the ground for his parachute to deploy.

Several P-80A Shooting Stars[N 1] were transferred to the United States Navy beginning 29 June 1945, retaining their P-80 designations. At Naval Air Station Patuxent River, one Navy P-80 was modified (with required add-ons, such as a tail hook) and loaded aboard the aircraft carrier USS Franklin D. Roosevelt at Norfolk, Virginia, on 31 October 1946. The following day the aircraft made four deck-run takeoffs and two catapult launches, with five arrested landings, flown by Marine Major Marion Carl. A second series of trials was held 11 November.[5]

The Navy had already begun procuring its own jet aircraft, but the slow pace of delivery was causing retention problems among pilots, particularly those of the Marines who were still flying Vought F4U Corsairs. To increase land-based jet transition training in the late 1940s, 50 F-80Cs were transferred to the Navy from the Air Force in 1949 as jet trainers. Designated TO-1 by the Navy (changed to TV-1 in 1950), 25 were based at Naval Air Station North Island, California, with VF-52, and 16 assigned to the Marine Corps, equipping VMF-311 at Marine Corps Air Station El Toro. These aircraft were eventually sent to reserve units. The success of these aircraft led to the procurement by the Navy of 698 T-33 Shooting Stars (as the TO-2/TV-2) to provide a two-seat aircraft for the training role. Lockheed went on to develop a carrier-capable version, the T2V SeaStar, which went into service in 1957.[5]

The costs are in approximately 1947 United States dollars and have not been adjusted for inflation.[1] 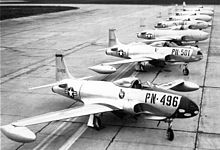 The Shooting Star began to enter service in late 1944 with 12 pre-production YP-80As one of which was destroyed in the accident in which Burcham was killed. A 13th YP-80A was modified to the sole F-14 photo reconnaissance model and lost in a December crash. Four were sent to Europe for operational testing (two to England and two to the 1st Fighter Group at Lesina Airfield, Italy) but when test pilot Major Frederic Borsodi was killed in a crash caused by an engine fire on 28 January 1945, demonstrating YP-80A 44-83026 at RAF Burtonwood, the YP-80A was temporarily grounded. Some early P-80s had been sent to Europe for demonstration, but because of the delay the Shooting Star saw no combat in World War II.[6]

The USAF Strategic Air Command had F-80 Shooting Stars in service from 1946 through 1948 with the 1st and 56th Fighter Groups. The first P-80s to serve in Europe joined the 55th Fighter Group (later redesignated the 31st FG) at Giebelstadt, Germany, in 1946, remaining 18 months. When the Soviet Union blockaded Berlin, a squadron of the 56th FG led by Colonel David C. Schilling made the first west-to-east Atlantic crossing by single-engined jets in July, flying to Germany for 45 days in Operation Fox Able I.[N 2] Replaced by the newly F-80-equipped 36th Fighter Group at Fürstenfeldbruck, the 56th FG conducted Fox Able II in May 1949. That same year F-80s first equipped the 51st Fighter Group, based in Japan.

The 4th (Langley Air Force Base, Virginia), 81st (Kirtland Air Force Base, New Mexico), and 57th (Elmendorf Air Force Base, Alaska) Fighter Groups all acquired F-80s in 1948, as did interceptor squadrons of the Air Defense Command. The first Air National Guard unit to fly the P-80 was the 196th FS of the California ANG in June 1947.

F-80Cs of the 8th Fighter-Bomber Group

Shooting Stars first saw combat service in the Korean War, employing both the F-80C variant and RF-80 photo-recon variants. The F-80 flew both air to air and air to ground sorties, claiming several aerial victories against North Korean Yak-9s and Il-10s. The first jet-versus-jet aerial victory in history was scored on 8 November 1950 when Lieutenant Russell J. Brown, flying an F-80, shot down a MiG-15.[7] [N 3]. Despite the initial claim of success, the speed of the straight-wing F-80s were inferior in performance to the 668 mph MiGs which incorporated German research on swept wings which delayed the onset of compressibility problems that enabled speeds much closer to the speed of sound. The F-80s were soon replaced in the air superiority role by the North American F-86 Sabre which had been delayed to also incorporate swept wings into an improved straight-winged naval FJ-1 Fury. However F-80 pilots still destroyed a total of 6 MiG-15s in aerial combat. When sufficient Sabres were in operation, the Shooting Star flew exclusively ground attack missions, and advanced flight training duties and air defense in Japan. By the end of hostilities, the only F-80s still flying in Korea were photo-reconnaissance variants.

One RF-80A unit operated in Korea:

Of the 277 F-80s lost in operations (approximately 30% of the existing inventory), 113 were destroyed by ground fire and 14 shot down by enemy aircraft.[1] F-80s are credited by the USAF with destroying 17 aircraft in air-to-air combat and 24 on the ground.[8] Major Charles J. Loring, Jr. was posthumously awarded the Medal of Honor for his actions while flying an F-80 with the 80th Fighter-Bomber Squadron, 8th Fighter-Bomber Wing on 22 November 1952.

1714 production aircraft were delivered to the Air Force prior to any conversions or redesignations, with their original block numbers. 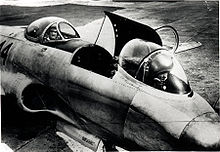 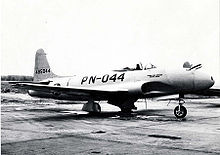 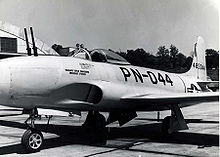 Lockheed also produced a two-seat trainer variant with a longer fuselage, the T-33, which remained in production until 1959 and was produced under license in Japan and Canada. The trainer was used by more than 20 different countries. A total of 6,557 T-33s were built and some are still flying.

Two TF-80Cs were modified as prototypes for the F-94 Starfire, an all-weather fighter which was produced in three variants. 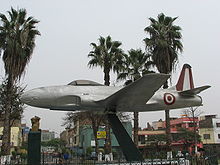 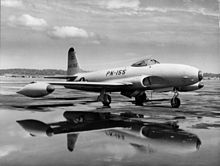 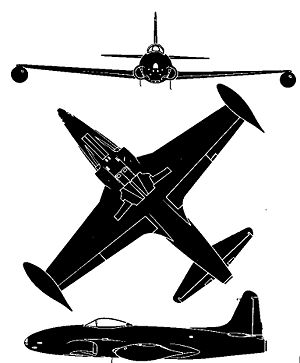 Data from Quest for Performance[28]