The North American Sabreliner (later sold as the Rockwell Sabreliner) is a mid-sized business jet developed by North American Aviation. It was offered to the U.S. Air Force in response to their Utility Trainer Experimental (UTX) program. Due to similarity of the wing and tail to North American's F-86 Sabre, it was dubbed "Sabreliner."[1] Military variants, designated T-39 Sabreliner, were used by both the U.S Air Force and U.S. Navy after the Air Force placed an initial order in 1959.[3] The Sabreliner was also developed into a commercial variant.

North American began development of the Sabreliner as an in-house project, and in response to the UTX request for proposals, they offered a military version to the Air Force. UTX combined two different roles, personnel transport and combat readiness training into the same aircraft.[2]

The civilian version prototype, which carried the model number NA-265, made its first flight on September 16, 1958. It was powered by a pair of General Electric YJ85 turbojet engines. The type received its FAA certification in April, 1963. The UTX candidate, designated the T-39A was identical in configuration to the NA-265, but when the contract was awarded and the T-39A entered production, it was powered with two Pratt & Whitney JT12A8 turbojet engines.[2]

The civilian production version, or Series 40, was slightly refined over the prototype, with more speed and a roomier cabin. North American then stretched the design by 3 feet 2 inches, giving even greater cabin space, and marketed it as the Series 60, which was certificated in April, 1967. The aerodynamics were cleaned up in the Series 60A, and the cabin made taller in the Series 75.[2]

By 1973, North American had merged with Rockwell International, and the company updated the Sabreliner designs with turbofan engines, selecting the Garrett AiResearch TFE731 for the Series 60, which became the Series 65A, and the General Electric CF700 for the Series 75A. These would be the last two versions, as Sabreliner production came to a close in 1981. The next year, Rockwell sold its Sabreliner division to a private equity firm which formed Sabreliner Corporation, the support organization for continuing operators.[1]

Over 800 Sabreliners were produced, of which 200 were T-39s.[2] A number of retired military T-39s have also entered the civilian world, since the military version also carry FAA type certification. As of May 2007[update], fifty-six examples have been lost in accidents.[4] The Series 65 was the last series run and 76 of them were produced, mostly for the private market. Monsanto has oldest continously operating company corporate jet division starting with it's purchase of a Saberliner 40.[5]

The original Navy version, the T3J-1 was redesignated T-39D after the 1962 re-designation), was fitted with the radar system from the F3H-1 Demon all-weather fighter and used as a radar trainer for pilots of that aircraft. The T-39D aircraft was subsequently introduced into the Basic Naval Aviation Observer (NAO), later Student Naval Flight Officer (SNFO) program. Three versions of the T-39D were used throughout the 1960s, 70s and 80s: one without radar for high altitude instrument navigation training and low altitude visual navigation training in the SNFO Intermediate syllabus, a second variant equipped with the APQ-126 radar from the A-7 Corsair II for training primarily bombardier/navigators, reconnaissance attack navigators and electronic countermeasures officers, and a third variant with the APQ-94 radar from the F-8 Crusader for training radar intercept officers in fighter aircraft.

The T-39N and T-39G are currently used in the NFO Strike and Strike Fighter syllabi in training USN and USMC Student Naval Flight Officers, various NATO/Allied/Coalition student navigators. Foreign students also train in the T-39 in place of the T-1 during the Intermediate Jet syllabus.

The Sabreliner requires a minium crew of two, and depending on cabin configuration, can carry up to 7 passengers (NA-265 through NA-265-40) or 10 passengers (NA-265-60 and subsequent models). As a Navy flight training aircraft, it will typically fly with a pilot, one or two NFO Instructors and two to three Student NFOs or student navigators/CSOs.[2] 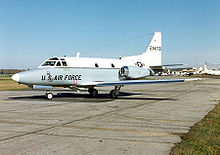 On January 24, 1964, an USAF T-39 Sabreliner flying from West Germany on a training mission crossed into East German airspace and was shot down by a Soviet MiG-19 near Vogelsberg, killing all 3 aboard.[citation needed]

On December 10, 1992, an Ecuadorian Air Force Sabreliner clipped a building and crashed in a residential area of Quito, killing all 10 people on board (including the commander of the Ecuadorian Army), and another 3 people on the ground.[citation needed] 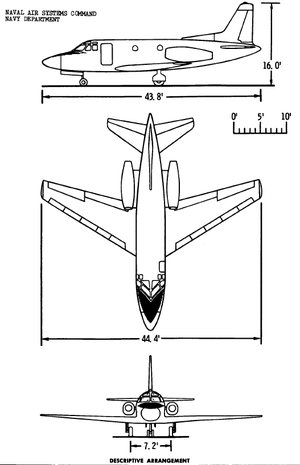