The prototype suffered from poor cockpit pressurization and the engines proved temperamental with frequent flameouts and surges with rapid throttle movements. The engines were upgraded to the AM-5A standard with 21.1 kN (4,740 lbf) of thrust each, which exceeded the power output of the Klimov VK-1F in afterburner while providing better fuel economy. The SM-1 was barely supersonic, reaching 1,193 km/h (745 mph) at 5,000 m (16,404 ft)—Mach 1.03. This performance was deemed insufficient for the new supersonic fighter and an afterburning version of the engine, the AM-5F, was proposed. While not implemented, the AM-5F served as the basis for the Tumansky RD-9 which powered production aircraft. Further development of the twin-engine concept resulted in a government request for the "I-360", internally designated "SM-2", which was also powered by the AM-5F engines, but featured a highly swept wing.

On 15 August 1953, the Mikoyan-Gurevich OKB was given a new order to create a frontline fighter. The OKB was asked to create two designs—a single-engined version with the Klimov VK-7 and a twin-engine version with Mikulin AM-9Fs. The twin-engine fighter, internally designated "SM-9"—but also assigned the production name MiG-19—was based on the earlier SM-2 prototype. The first airframe, "SM-9/1" flew on 5 January 1954. The afterburner did not light in the first flight, but in the second flight the aircraft reached Mach 1.25 at 8,050 m (26,411 ft). This was improved to Mach 1.44 in subsequent flights. Based on this promising performance, the MiG-19 was ordered into production on 17 February 1954, even though government acceptance trials did not start until September of that year. The first production aircraft rolled off the assembly line in March 1955. 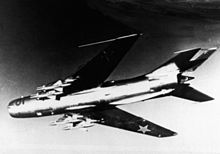 Initial enthusiasm for the aircraft was dampened by several problems. The most alarming of these was the danger of a midair explosion due to overheating of the fuselage fuel tanks located between the engines. Deployment of airbrakes at high speeds caused a high-g pitch-up. Elevators lacked authority at supersonic speeds. The high landing speed of 230 km/h (145 mph) (compared to 160 km/h (100 mph) in the MiG-15), combined with absence of a two-seat trainer version, slowed pilot transition to the type. Handling problems were addressed with the second prototype, "SM-9/2", which added a third ventral airbrake and introduced all-moving tailplanes with a damper to prevent pilot-induced oscillations at subsonic speeds. It flew on 16 September 1954, and entered production as the MiG-19S.

Approximately 5,500 MiG-19s were produced, first in the USSR and in Czechoslovakia as the Avia S-105, but mainly in the People's Republic of China as the Shenyang J-6. The aircraft saw service with a number of other national air forces, including those of Cuba, North Vietnam, Egypt, Pakistan, and North Korea. The aircraft saw combat during the Vietnam War, the 1967 Six Day War, and the 1971 Bangladesh War.

All Soviet-built MiG-19 variants are single-seaters only. Although the Chinese developed the JJ-6 trainer version of the Shenyang J-6, the Soviets believed that the MiG-19's handling was easy enough no special conversion trainer was needed (other than the MiG-15 UTI).

In the USSR, the MiG-19 was superseded by the MiG-21. The Shenyang J-6 remained a staple of the Chinese People's Liberation Army Air Force until the 1980s and has also been developed into the Nanchang Q-5 (NATO reporting name "Fantan") attack aircraft. Despite its age, the MiG-19 and its descendants exhibit good handling characteristics at low altitude and a surprisingly high rate of climb, and their heavy cannon armament—a one-second burst from three 30 mm NR-30 cannons had a projectile mass of 18 kg (40 lb)—makes them formidable adversaries in close combat.

During their service with Soviet Anti-Air Defense and in East Germany, MiG-19s were involved in multiple intercepts of Western reconnaissance aircraft. The first documented encounter with a Lockheed U-2 took place in the autumn of 1957. The MiG-19 pilot reported seeing the aircraft, but could not make up the 2,234 m (7,000 ft) difference in altitude. When Francis Gary Powers's U-2 was shot down in the 1960 incident, one pursuing MiG-19P was also hit by the salvo of S-75 Dvina (NATO: SA-2 "Guideline") missiles, killing the pilot Sergei Safronov. In a highly controversial incident, on 1 July 1960, a MiG-19 shot down an RB-47H (S/N 53-4281) reconnaissance aircraft in international airspace over the Arctic Circle with four of the crew killed and two captured by the Soviets (they were released in 1961). In another incident, on 28 January 1964, a MiG-19 shot down a T-39 Sabreliner which had strayed into East German airspace while on a training mission; all three crewmembers were killed.

In early 1969, Hanoi made the decision to strengthen its air defenses by creating a third jet fighter unit; the 925th Fighter Regiment. This unit would consist of late model MiG-17s and the newly acquired MiG-19s (nearly all of which were J-6s from the People's Republic of China (PRC)). The regiment was established at Yen Bai, and by April 1969, nine combat-rated MiG-19 pilots were posted for combat duty. While some of North Vietnam's MiG-17s and nearly all of their MiG-21s were supplied by the Soviet Union, the bulk of their MiG-19s (J-6 models) were supplied by the PRC, which seldom exceeded 54 MiG-19s in number.[1]

The first use and loss of a U.S. fighter to a MiG-19 (J-6) was in 1965 when a USAF Lockheed F-104 Starfighter piloted by LTC Philip E. Smith was "bounced" by a People's Liberation Army Air Force aircraft near Hainan Island. His Starfighter took cannon fire which damaged a portion of his wing and missile mount. Smith gave chase and did receive missile tone on the MiG, and within a millisecond of pressing his missile firing button, his Starfighter lost all power. He had to eject and was captured. Smith was held prisoner until released in 1972, coincidentally during U.S. President Richard Nixon's visit to China in 1972.[2] According to another source, Smith was released in 1973.[3]

North Vietnam's Air Force used the MiG-19 much later in the air war than the MiG-17 and the MiG-21. MiG-19s, despite their limited numbers, were involved in extensive combat during Operations Linebacker 1 and Linebacker 2 (aka the Christmas Bombing). The NVAF claimed only seven victories over US aircraft, using the MiG-19, all of which were F-4 Phantom IIs.[4] Primarily because of the aircraft's twin engines, which created a maintenance nightmare, the MiG-19 was not favored by North Vietnamese pilots. While the MiG-17 had maneuverability and the MiG-21 had speed, the MiG-19 had a combination of both, but not to the same degree as the others.[citation needed] North Vietnam used the MiG-19 from 1969 until the 1980s when it was replaced by newer aircraft.

Compared to the F-4 Phantom II however, although lacking mounts for air-to-air missiles, it had the one advantage that the early model Phantoms did not have: it was armed with a cannon. Confirmed aerial victories by MiG-19s while assigned to the 925th FR, which match US records occurred on: 10 May 1972 in which two F-4 Phantoms were shot down by MiG-19s flown by Pham Hung Son and Nguyen Manh Tung. Both NVAF victories over the F-4s were accomplished by cannon fire.[5][6][7] Combat results of the 925th FR using MiG-19s, according to the North Vietnamese Air Force were: two F-4s on 8 May 1972; two F-4s on 10 May 1972; one F-4 on 18 May 1972; and two F-4s shot down on 23 May 1972;[4] these losses were in exchange for 10 MiG-19s lost in aerial combat with US jets. The MiG-19 did make history in one manner however; on 2 June 1972 over the skies of North Vietnam, the MiG-19 has the inauspicious honor of being the only recorded jet fighter[citation needed] to be shot down in aerial combat by cannon fire at supersonic speeds, by a USAF F-4 Phantom.

The MiG-19 apparently was in front line service with the PLAAF, and saw limited combat against their common adversary, the Republic of China Air Force (Nationalist China). One major air battle between Red and Nationalist Chinese aircraft occurred in 1967, with 12 J-6s taking on four Lockheed F-104 Starfighters. Each side claimed one kill.

There were reports of People's Republic of China J-6s (MiG-19s) flying combat missions during infrequent border squabbles with the Soviets, though with no records of dogfights, and encounters during the Vietnam War with US aircraft that strayed into Chinese airspace. These confrontations resulted in a few shootdowns of US aircraft, with no recorded losses of Chinese planes, although the MiGs sometimes had to make a hasty retreat back into Chinese airspace when the Americans flew in reinforcements.

In 1962 Egyptian MiG-19s saw some action in the ground-attack role during the civil war in Yemen during the early 1960s. The first reported air combat in the Mideast with the MiG-19 was on 29 November 1966, when two Egyptian MiG-19 fighters battled Israeli Mirage IIICs. The Israelis claimed two kills and no losses. Around 80 MiG-19s were in service with Egypt during the Six-Day War in 1967, but more than half were destroyed on the ground during the opening Israeli airstrikes of Operation Focus. Israeli pilots, however, did find the MiG-19 a potentially dangerous adversary because of its performance, maneuverability, and heavy armament.

Following the war, the Egyptians organized the surviving MiG-19 aircraft and assigned them air defense tasks of Egypt's interior. The Soviet Union did not supply Egypt with any replacement of the MiG-19s destroyed in the Six Day War, but Egypt might have received some from Syria and Iraq, so that by the end of 1968 there were 80+ MiG-19s in service with the Egyptian Air Force (EAF). The aircraft also saw combat during the War of Attrition; in one engagement on 19 May 1969, a MiG-19 aircraft engaged two Israeli Mirages, shooting down one with cannon fire while the other escaped.[8] Egypt had around 60 Mig-19s in service during the Yom Kippur War of 1973 in which they served as close support aircraft.

The Iraqis obtained some MiG-19S fighters in the early 1960s, but later sold them all off (a couple remaining in local museums), though the survivors did see some action against the Kurds in the 1960s. It is claimed that the Iranians acquired a batch of their own F-6s.

Tanzania flew MiG-19S fighters against Uganda during the war between the two states in 1978 and 1979, while the Sudan used its MiG-19S fighters against separatists in southern Sudan, with at least one shot down. The Somalis flew the F-6 against rebels and the Ethiopians in the 1980s, though with the breakdown in civil order in Somalia all their aircraft ended up derelict by the early 1990s.

In November 1969 two Air National Guard F-86Hs flew a three-day mission in Nellis. The purpose was the comparision of the flight envelope of Sabre against the MiG-19. The HAm Drill program evaluated several other Navy and Air Force aircraft against the MiG-19.

Some years earlier, in 1966, Feather Duster program evaluated all operational American aircraft against the MiG-19. Since the F-86H was the closest thing to a MiG-I9, it was used as the enemy. 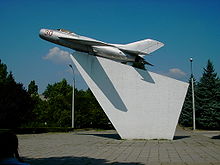 Operators of the MiG-19

People's Republic of China
Chinese-built variant Shenyang J-6, all single-seaters retired from frontline combat service in 1992, except for JJ-6 trainer and Nanchang Q-5 variant[10], some J-6 was converted to target/attack drone (number not confirmed). As of 2010 all were decommissioned.

Indonesia
The Indonesian Air Force acquired a number of MiG-19S in 1961 and used during the preparation of Operation TRIKORA in 1962, (the taking of Western New Guinea from the Netherlands) in Western New Guinea (now, Papua and Papua Barat); several of these aircraft crashed. The MiG-19S was removed from Indonesian service in 1970.

Pakistan
Pakistan Air Force. All retired in 2002. Some of them are on display on squares in various cities. 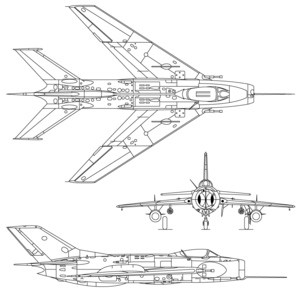