Vietnam People's Air Force
This article is about the current Vietnamese air force. For the air force of the former Republic of Vietnam, see Vietnam Air Force.

The Vietnam People's Air Force (Vietnamese: Không quân Nhân dân Việt Nam) is the air force of Vietnam. It is the successor of the former North Vietnamese Air Force and the absorbed Republic of Vietnam Air Force following the re-unification of Vietnam in 1975.

The first Vietnamese aircraft were two trainers, a de Havilland Tiger Moth and a Morane-Saulnier, which were initially the private property of the emperor Bao Dai.[1] In 1945, Bao Dai gave the aircraft to the Vietnamese government. On March 9, 1949, Ho Chi Minh ordered the organization of the Air Force Research Committee (Ban Nghiên cứu Không quân).[1] The first Vietnamese service aircraft flight was made by the Tiger Moth on August 15, 1949.[1] A small-scale training was carried out in following years.

Further development of aviation in North Vietnam began in 1956, when a number of trainees were sent to the USSR and China for pilot training. They were organized into two groups, for pilots and mechanics, respectively; and among others, utilized the Czechoslovak Zlin Z-226 and Aero Ae-45. The first unit of the VPAF was the No. 919 Transport Regiment (Trung đoàn Không quân Vận tải 919), organized on May 1, 1959, with An-2, Li-2, Il-14 aircraft, followed by the No. 910 Training Regiment (Trung đoàn Không quân 910) with Yak-18 trainers.[1] In 1963 the Air Force and Air Defense Force were merged into the Air and Air Defence Force (Quân chủng Phòng không - Không quân).

The North Vietnamese Air Force (NVAF) received its first jet fighter aircraft, the MiG-17 in February 1964, but they were initially stationed at air bases in Communist China, while their pilots were being trained. On February 3, 1964, the first fighter regiment No. 921 (Trung đoàn Không quân Tiêm kích 921), aka "Red Star squadron", was formed, and on August 6 it arrived from China in North Vietnam with its MiG-17s.[1] On September 7, the No. 923 fighter regiment, aka "Yen The squadron", led by Lt. Col. Nguyen Phuc Trach, was formed. In May 1965, No. 16 bomber company (Đại đội Không quân Ném bom 16) was formed with Il-28 twin engine bombers. Only one Il-28 sortie was flown in 1972 against Laotian forces.

The North Vietnamese Air Force's first jet air-to-air engagement with U.S. aircraft was on April 3, 1965. The NVAF claimed the shooting down of two US Navy F-8 Crusader, which was not confirmed by US sources, although they acknowledged having encountered MiGs.[1] Consequently, April 3 became "North Vietnamese Air Force Day". On April 4 the VPAF (NVAF) scored the first confirmed victories to be acknowledged by both sides. The US fighter community was shocked when relatively slow, post-Korean era MiG-17 fighters shot down advanced F-105 Thunderchief fighters-bombers attacking the Thanh Hoa Bridge. The two downed F-105s were carrying their normal heavy bomb load, and were not able to react to their attackers.[1]

In 1965, the NVAF were supplied with supersonic MiG-21s by the USSR which were used for high speed GCI controlled hit and run intercepts against American air strike groups. The MiG-21 tactics became so effective, that by late 1966, an operation was mounted to especially deal with the MiG-21 threat. Led by Colonel Robin Olds on 2 January 1967, Operation Bolo lured MiG-21s into the air, thinking they were intercepting a F-105 strike group, but instead found a sky full of missile armed F-4 Phantom IIs set for aerial combat. The result was a loss of almost half the inventory of MiG-21 interceptors, at a cost of no U.S. losses. The VPAF (NVAF) stood down for additional training after this setback.

Meanwhile, the disappointing performances of US Air Force and US Navy (USN) airmen, even though flying the contemporary advanced aircraft of those times, combined with a legacy of successes from World War II and the Korean War, resulted in a total revamping of aerial combat training for the USN in 1968 (Top Gun school; established 1969). The designs for an entire generation of aircraft, with engineering for optimized daylight air to air combat (dog fighting) against both older, as well as for emerging MiG fighters, were being put to the drawing board. US forces could not consistently track low flying MiGs on radar, and were hampered by restrictive rules of engagement (ROE) which required pilots to visually acquire their targets, nullifying much of the advantage of radar guided missiles, which often proved unreliable when used in combat.

Although there were many so-called "political restrictions" placed on US airmen, such as when and where NVAF jet fighters could be attacked, the successful exchange ratio which US pilots had had over enemy fliers during the Korean War (1950–1953) was not to be repeated over North Vietnam; with the notable exceptions of the successes by USN airmen who had completed training from the TOPGUN training center at Miramar, California (USA).

The VPAF (NVAF) was a defensive air arm, with the primary mission of defending North Vietnam, and until the last stages of the war, did not conduct air operations into South Vietnam; nor did the NVAF conduct general offensive actions against enemy naval forces off the coast. However it did conduct limited attacks on the opposing naval vessels, notably damaging the United States destroyer USS Higbee (DD-806) in 1972. In a separate incident, MiG-17s that ventured over water were shot down by surface-to-air missiles (SAMs) fired by U.S. warships.

The VPAF (NVAF) did not engage all US sorties. Most US aircraft were destroyed by SA-2 surface-to-air missiles or anti-aircraft artillery (AAA), and in some cases, even small arms. Typically, VPAF MiGs would not engage unless it was to their advantage. Some of the aerial tactics used were similar to Operation Bolo, which lured the NVAF to the fight.

U.S. Navy ace Randy Cunningham believed that he shot down a Mig-17 piloted by the legendary "Nguyen Toon" or "Colonel Tomb" while flying his F4 Phantom. However, no research has been able to identify any "Col. Tomb" as actually existing. Most likely he downed a flight leader of the 923rd Regiment.[2] Many North Vietnamese pilots were not only skilled but unorthodox, as Cunningham found out after making elementary tactical errors.[3] The resulting dogfight became extended. Cunningham climbed steeply, and the MiG pilot surprised Cunningham by climbing as well. Using his Top Gun training, Cunningham finally forced the MiG out ahead of him and destroyed it.

There were several times during the war that the U.S. bombing restrictions of North Vietnamese Airfields were lifted. Many VPAF (NVAF) aircraft were destroyed on the ground, and those that were not, were withdrawn to a sanctuary in China. In December 1972, the North Vietnamese air defences nearly exhausted their supply of surface-to-air missiles trying to down the high-flying B-52 raids over the North. The North Vietnamese Air Defense Network was degraded by electronic countermeasures (ECM) and other suppression of enemy air defenses (SEAD) measures. However, with the counter-measures and a effective air-defense network, for 12 days of Operation Linebacker II, over 81 US aircraft were claimed as shot down, including 34 of the B-52 heavy bombers, two attributed to the VPAF, during the last weeks of 1972 (Operation Linebacker II).[4] After the negotiated end of American involvement in early 1973, the No. 919 transport air group (Lữ đoàn Không quân vận tải 919), was formed; and equipped with fix-winged aircraft, as well as helicopters (rotor-wing) in November.

The VPAF did not play a major role during the Ho Chi Minh Campaign in 1975. The only sorties flown were conducted by five captured VNAF A-37s. SA-2s were transported into South Vietnam to counter possible US military air strikes. The US could not bring back their air power during the 1975 offensive, which had proven decisive in 1972, and the VNAF did not have the capability to strike targets in the north nor to defend against the onslaught in the south.

After the end of the Vietnam War (called the American War in Vietnam) in May 1975, more regiments were formed. No. 935 fighter regiment "Dong Nai" and no. 937 fighter-bomber regiment "Hau Giang", followed by no. 918 transport regiment "Hong Ha" and no. 917 mixed transport regiment "Dong Thap" were created in July 1975. In September 1975, the four newly created regiments were formed into the 370nd Air Division "Le Loi" and the 372nd Air Division "Hai Van" was formed, including among others the 925th fighter regiment.[1]

When Vietnam invaded Cambodia in 1979, former VNAF A-37s flew most of the ground support missions. These aircraft were more suited to the role than the MiGs. Former VNAF F-5Es, C-123s, C-130s, and UH-1s were used by the VPAF for many years after the end of the War.

In the years between 1953 and 1991, approximately 700 warplanes, 120 helicopters, and 158 missile complexes have been supplied to North Vietnam by the USSR and PR China (primarily the MiG-19 (J6 series). Even today, three-quarters of Vietnamese weaponry has been made in post-Cold-War Russia. [1] Today the VPAF is in the midst of modernization. It still operates late model MiG-21s, Su-22s, aircraft of the cold war era [2] [3]. However, it has recently been modernizing its air force with models of the Su-27-SK air superiority fighter following closer military ties, and an array of arms deals with Russia. To date, Vietnam has ordered and received 12 of these aircraft. In 2004, it also acquired 4 modified variants of the Su-30 MK2V, newer models of the Su-27. In May 2009, they have inked a deal to procure additional 12 aircraft from the Russian to bolster their aging fleet. The Vietnamese air force has also acquired new advanced air defense systems, including two S-300 PMU1 (NATO designation: SA-20) short-to-high altitude SAM batteries in a deal worth $300 million with Russia [4].

Air Division and Regimental Names of the VPAF[8]

About the other pilots, see this 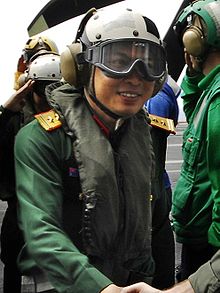 Some airbases in the south were built by the French, Japanese* (World War II), United States Air Force or United States Navy for South Vietnam. The northern bases were likely built with assistance and/or use by the French; Communist Chinese, or Soviet Union during the Vietnam War.

The following bases have been retired from the VPAF:

Most of the VPAF's aircraft were supplied from the Soviet Union & PRC, but hundreds were left over by the Americans via the Republic of Vietnam; most of which are no longer in service.

Some jet fighters (F-5s and A-37s) were auctioned in 1998, and are currently owned by private companies, and individuals in America, Australia, New Zealand, and Europe.