The Armed Forces for the Defence of Mozambique (Portuguese: Forças Armadas de Defesa de Moçambique) were formed in mid August 1994 from the previous warring factions of the Mozambique Civil War, which ended in 1992. The new armed forces were formed through a commission, the Comissão Conjunta para a Formação das Forças Armadas de Defesa e Segurança de Moçambique (CCFADM), chaired by the Organization of the United Nations to Mozambique ONUMOZ. The new armed forces were formed by integrating those soldiers of the former Popular Forces for the Liberation of Mozambique (FPLM) and the rebels Mozambican National Resistance RENAMO who wished to stay in uniform. Two Generals were point to lead the new forces one from FRELIMO Lieutenant General Lagos Lidimo who was named Chief of the Defence Force and Major General Mateus Ngonhamo from RENAMO as Vice-Chief of the Defence Force. The former Chief of the Army (FPLM) Lieutenant General Antonio Hama Thai was retired.

The first three infantry battalions were stationed at Chokwe, Cuamba, and Quelimane.[4]

In April 2010 it was announced that "the People's Republic of China donated to the FADM material for agriculture worth 4 million euros, including trucks, tractors, agricultural implements, mowers and motorbikes in the framework of bilateral cooperation in the military. Under a protocol of cooperation in the military field, the Government of China will also provide support to the Ministry of Defence of Mozambique with about 1 million euros for the areas of training and logistics. The protocol for granting aid to the Armed Forces for the Defence of Mozambique (FADM) was signed by Defense Minister of Mozambique, Filipe Nyusi, and the charge d'affaires of the Chinese embassy in Maputo, Lee Tongli."[5]

Information on the Mozambique Army's structure is scarce. The IISS estimates that it consists of a total force of 9-10,000, with 7 infantry battalions, 3 Special Forces battalions, 2-3 batteries of artillery, 2 battalions of engineers, and one logistics battalion.[2]

These equipment estimates are from the IISS Military Balance 2007. The serviceability of Mozambique's army equipment, is on a level of 10% or less.

The Mozambique Air Force (Forca Aérea De Moçambique - FAM) was part of the national army initially, and from 1985 to 1990 was known as the People's Liberation Air Force. 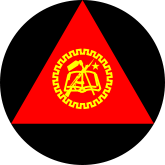 The FPLM roundel is based on the Flag of Mozambique.

Due to Mozambique's history, the air force has a history of using former Portuguese aircraft, ever since its setting-up after independence in 1975, supported by Cuba and the USSR. As such there was an inflow of Soviet-built aircraft to support the government in the civil war up to 1992. Following the ceasefire in that year the change in government policies towards Western-style economics meant that Cuban support for the Air Force dwindled and most of the aircraft have fallen into disrepair at the three main bases of Beira, Nacala and Nampula. The FAM is now effectively a token force, and the defence budget has been cut down to 1.5 of Mozambique's Gross National Product. The aircraft inventory is thus:[6]

In September 2004 it was reported that the South African Navy was to donate two of its Namacurra-class harbour patrol boats to the Mozambique Navy. The boats were refitted by the naval dockyard at Simon's Town and equipped with outboard motors and navigation equipment donated by the French Navy. The French Navy support vessel Marne was to deliver the boats to Maputo en route to its ALINDIEN operational area in the Indian Ocean after a refit in Cape Town.[7]