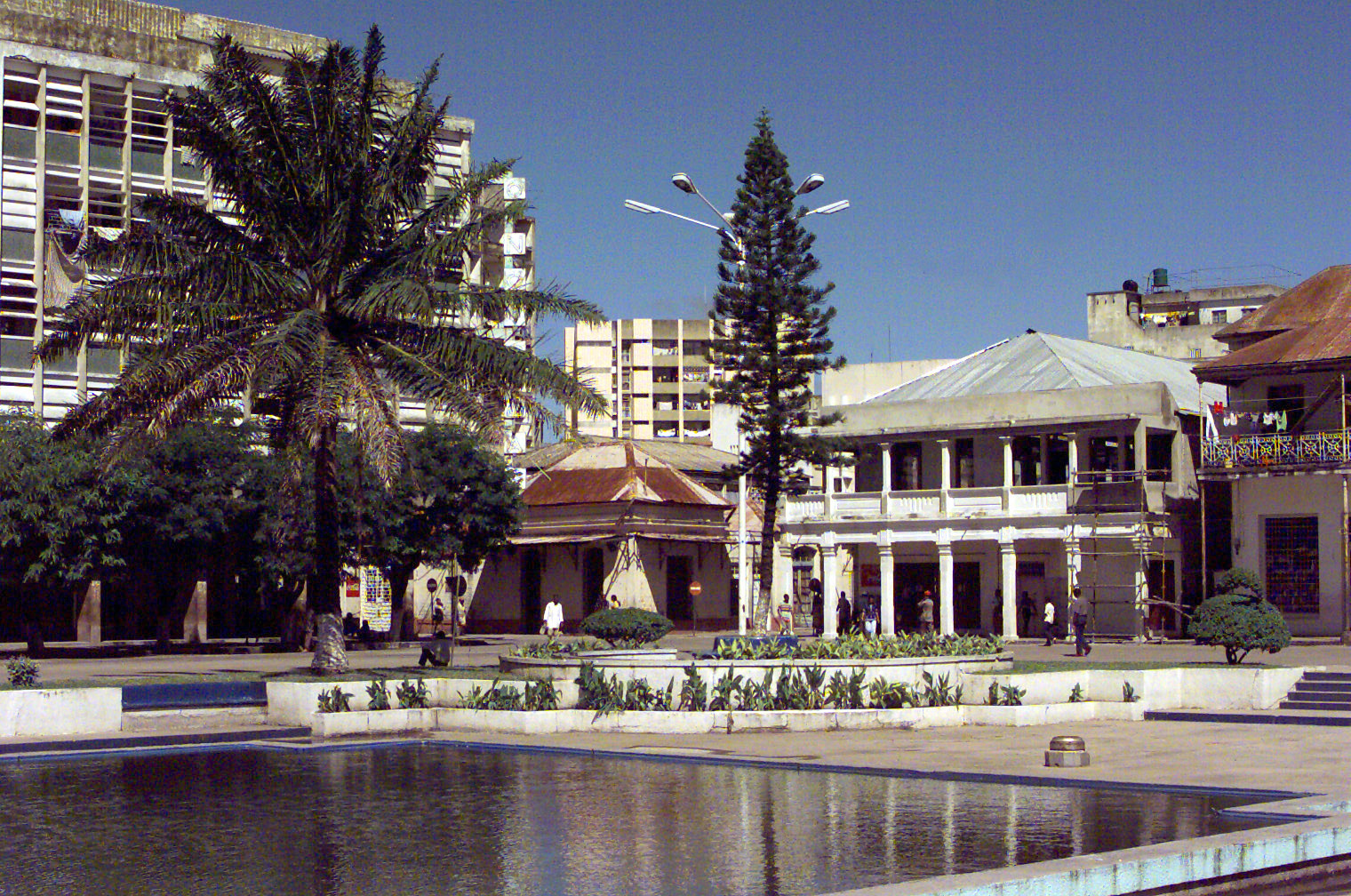 Beira is the second largest city in . It lies in the central region of the country in , where the meets the . It had a population of 412,588 in and an estimated 546,000 in . It holds the regionally-significant Port of Beira which acts as a gateway for both the central interior portion of the country as well as the land-locked nations of , and . Beira was originally developed by the Portuguese in the 19th century, and directly developed by the Portuguese colonial government from 1947 to 1975, when Mozambique become independent from Portugal.

The city was established in by the Portuguese and soon supplanted as the main port in the Portuguese-administered territory. The Portuguese built the port and a railway to , Portuguese families settled in the newly-founded locality and started to develop commercial activities. With the growth of the village, in 1907 the elevated Beira to the status of city ("cidade"). Since 1891 as the headquarters of the "Companhia de Moçambique" (), the city's administration passed from the trading company to the Portuguese government in 1942. In 1966, the construction of a new railway station was completed. Before Mozambique's independence from Portugal, as a city of , Beira was noted for its well-equipped , one of the major facilities of its kind in all , , and . The city prospered as a port with different ethnic communities (Portuguese, Indian, Chinese, indigenous Africans) employed in administration, commerce, and industry. A large English-speaking population was the result of being a favourite holiday destination for white Rhodesians. One reminder of this is the Grande Hotel, built by the Portuguese, near the shore of the . [ [http://www.youtube.com/watch?v=wwNCk59J5Ig Cidade da Beira] A short film of Beira, Portuguese Mozambique.] [ [http://www.youtube.com/watch?v=w9LR1FYj4m0 BEIRA-CENTENÁRIO-O MEU TRIBUTO] A film about Beira, Portuguese Mozambique, its Grande Hotel, and the railway station. Post-independence images of the city are shown, the film uses images of RTP 1's TV program "Grande Reportagem".] By 1970, the city of Beira had 113,770 inhabitants.

After independence from Portugal

After independence from Portugal in 1975, many white ethnic Portuguese left the city. Mozambique was ravaged by a civil war from 1977 to 1992, opposing , which controlled the government, to the rebels of , descending to near total chaos in a couple of years. The famine, disease and poverty-stricken country collapsed. In the city of Beira, its famous Grande Hotel, was occupied by around 1,000 homeless Beirans, and by the end of the civil war it was in near-ruins.

In the year 2000, Beira, along with Maputo and most of Southern Mozambique was covered by flooding. Millions were left homeless and hundreds died. The had a negative impact on the local economy.

Attractions in the city include its , and . It is also home to an and lies at the end of a to . There are a few restaurants of note in the area that are up to par for tourists. Bique's (threatened by the sea waters) is a restaurant located on an attractive stretch of beach along the southeastern edge of the city some kilometers from the city center and serves several traditional African dishes as well as some South African cuisine. Another restaurant located within the heart of downtown is called Kanimambo and is owned by a native couple that serves authentic (and very good, even by Western standards) Chinese food. Both restaurants are easily located by asking directions.

The only notable hotel for tourists is called the Tivoli and is located downtown, near Kanimambo. The rooms are small but clean, and unless you know someone with a nice place in town you'll be hard pressed to find anything better.There are some good alternatives in the form of Macuti housing complex, another nice lodge by the Macuti Lighthouse, and a good simple pension on Eduardo Mondlane Avenue.

In the city itself there is very little to see in the way of tourist attractions. Beira does not cater for the mass-tourist, but can be very interesting to the photographer with many places of great human, architectural and nature value.If you are interested in a bit of history you might want to swing by the , which was built by the Portuguese to be an exquisite hotel but was abandoned before opening when Mozambique gained its independence of the colonial rulers and is now occupied by several hundred squatters.

If you make your way towards the east, away from the city, on the opposite side of the peninsula (bordered on the west by the a large ocean inlet/river and on the east by the ) on which the city is located you will find some very beautiful, pristine white-sand beaches and no one else in sight for miles. Here and there as you head north you will encounter small villages and if you time your visit right you will find fishermen coming home with their catches. Pay particular attention to their (camarāo), which are delicious and which they will sell to you at a very low price if you know how to negotiate and if you're willing to prepare (de-shell) and cook them yourself. Prawns can also be obtained right southwest of the downtown area, on the beach, usually early in the mornings. There is a large market in the area and it is hard to miss.

Two tourists were recently murdered at Macuti beach at night, so extra precaution should be taken in that area. Security is a serious issue in Beria, and if you walk around with money, cellphone or camera and look like a tourist, be it in city center or on isolated stretches of beach, you can get into trouble. General rule is to not take anything except for some hand money when going around. Carrying a handgun or knife for personal protection is recommended.

Heading north along the only highway that leaves the city you will soon come across the entrance to the old national park. Absolutely worth seeing if you have the time and willingness to rough it through the overgrown roads and paths and a relative lack of infrastructure. The government still stations a few rangers in the park and there is rapid work being done to restore the park to its former glory, but there is much left undone. Do not expect a comfy, hand-holding , but many will find the potential rewards of a trek through a virtually untouched game reserve worth the hassle and risks.

These days, nice places to visit include the Nautico's for food and sea, Biques and Pappas (best food but also expensive), eat some "pasteís" in the city center or visit the local markets.

Another highlight is Savane, which is a small camp with restaurant and beach outside Beira. The water is a bit more transparent, the food ok and the boat trip over the river a nice bit of fun. You will need a 4x4 to traverse the dirt road to Savane from Beira. It takes approximately 1 hour to drive 30 km on this road when it is in (relatively) good condition.

Rio Maria is also worth visiting, and is an estuary. There are no facilities. Main attractions are the natural beauty and people.

Beira has long been a major trade point for exports coming in and out of Zimbabwe, Malawi, Zambia and other South African nations. Because of this, the port of Beira is the second largest in Mozambique. The importance of the port was shown during the Mozambique Civil War, when Zimbabwean troops protected the railway and highway from Beira to Mutare in order to continue trade.

Recently, the Mozambique transportation minister, , stated that the government is planning on modernizing the Beira and more northern Nacala ports for an estimated cost of $900m; $500m and 400m respectively. [http://www.engineeringnews.co.za/article.php?a_id=133942] The government has also stated that it plans on modernizing surrounding railway and highway infrastructure so that the port is better connected to the nation's mines.

There is also a ferry service in Beira, linking the city to neighboring cities, including Nova Sofala and other coastal towns. [Mambone.http://www.sturrockshipping.co.za/upload/saport/file/9_07_PORT_OF_Beira.pdf] Beira is served by an airport to the northeast of the city, with both domestic and international flights.

* [http://municipiobeira.gov.mz Municipio da Beira] an official site of the Municipality of Beira, with news and recent pictures
* [http://cidadedabeira.tripod.com Cidade da Beira] a Portuguese language site with some old and new pictures