New Netherland, or Nieuw-Nederland in Dutch, was the 17th century colonial province of the Republic of the Seven United Netherlands on northeastern coast of North America. The claimed territory were the lands from the Delmarva Peninsula to southern Cape Cod. Settled areas are now part of Mid-Atlantic states of New York, New Jersey, Delaware, Connecticut, and Pennsylvania. Its capital, New Amsterdam, was located at the southern tip of the island of Manhattan on the Upper New York Bay.

Initially explored in 1609 by Henry Hudson, sailing on an expedition for the Dutch East India Company, the region was later surveyed and charted, and in 1614 given its name. The Dutch named the three main rivers of the province the Zuyd Rivier or South River, the Noort Rivier or North River, and the Versche Rivier or Fresh River, and intended to use them to gain access to the interior, the indigenous population, and the lucrative fur trade.

International law required not only discovery and charting but also settlement to perfect a territorial claim. Large scale settlement was rejected in favor of formula that was working in Asia, namely establishing factorijen (trading posts with a military presence and a small support community). Despite never-ending wars on the European continent, it was also the time known as the Dutch Golden Age, and it was difficult to recruit people willing to leave the economic boom and cultural vibrancy of Europe. Mismanagement and underfunding by the Dutch West India Company, and misunderstandings and armed conflict with indigenous population hindered early settlement. Liberalization of trade, a degree of self-rule, and the loss of Dutch Brazil led to expontial growth in the 1650s. Transfers of power from the Netherlands to England, the last formalized in 1674, were peaceful in the province.

During the first decade the first of two Fort Nassaus was built in Mahican territory, and factorijen, or small trading post went up (at Schenectady, Schoharie, Esopus, Quinnipiac, Communipaw,[1] Ninigret, Totoket [2] and elsewhere), where commerce could be conducted with Native American population. Trapper Jan Rodrigues is believed to be the first recorded non-Native American to winter on the island of Manhattan in 1611.

In 1621, the States General, the government of the Dutch Republic, awarded the newly formed Dutch West India Company a trade monopoly for the region, and in 1624 New Netherland became a province of the Dutch Republic. Initially the South River, believed to have better climate, was chosen as site of the capital, but summer humidity and mosquitos, and winter freezing, made North River, more appealing. A number of ships broughts settlers to the New World, at first to Noten Island, and soon thereafter at the tip of Manhattan, construction was started of Fort Amsterdam, around which would grow the heart of the colony. Some of the early arrivals were dispersed upstream to Fort Orange, to the south Fort Wilhelmus, or to the Fresh River. Among those who made the crossing were many Walloons and some Africans (as company-owned slaves).

In 1629, the company introduced inducements known as the Charter of Freedoms and Exemptions, commonly known as the "patroon system". Invested members who were willing to fulfill certain conditions, including the transport and settlement of at least 50 persons, would receive vasts land patents and manorial rights, not dissimilar than that of a feudal lord. A number of attempts were made, the only one of substantial success being the Manor of Rensselaerswyck. Pavonia, across the river from New Amsterdam, was returned to WIC and became a company managed holding. In 1640 company policy was changed and allowed land purchases by individuals in good standing.[1]

Another patroon patent, Zwaanendael Colony, was site of first Dutch colonial settlement on the Zuyd Rivier but was soon plundered after its founding in 1631.[3] After 1638, settlement was mostly by those built in officially "unrecognized" New Sweden and were brought under New Netherland control in 1655, when Fort Casimir was built. In 1663, Pieter Corneliszoon Plockhoy attempted to create a "utopian" settlement in the region but it soon expired under English rule.[4]

Shortly after constructing their first settlement on the island of Manhattan, the Dutch established a short-lived factorij trading post at Kievits Hoek, or Plover's Corner (present day Old Saybrook). It was soon abandoned as the Dutch began to focus more on their new trading post on the Fresh River. Fort Huis de Goed Hoop was completed in 1633. Soon after, some miles upriver, a town was established by settlers from the English Massachusetts Colony who, in 1639, formed the colony of the Plantacons of the Connecticott River.[5] The New Haven Colony soon followed. In 1650, Petrus Stuyvesant attempted to contain further incursion to the area and, in the Treaty of Hartford, agreed to a border 50 miles west of the river. This did some not stem the flow of New Englanders to Long Island or the mainland along its sound.

At the mouth of the North River grew the port called, in the vernacular of the day, The Manhattans. The capital of the province, New Amsterdam received its municipal charter in 1652, and included the isle of Manhattan, Staaten Eylandt, Pavonia, and the Lange Eylandt towns, including Gravesend, Breuckelen, and Nieuw Amersfoort

In the same year a municipal charter was also granted to Beverwijck which had grown from a trading post to a bustling town in the midst of Rensselaerswyck.[6] In 1657, the homesteads scattered along the west bank of the river valley in Esopus country were required to build a garrison that became the province's third largest town, Wiltwijk.

It was after the final transfer of power to the English (with the Treaty of Westminster) that settlers to New Netherland and their descendents spread across the region and established many of the towns and cities which exist today.[7] The Dutch Reformed Church played an important role this expansion.[8] Following the course of the Hudson River in the north via New York Harbor to the Raritan River in the south, settlement and population grew along what George Washington called the "Dutch Belt".[9]

Population estimates do not include Native Americans. 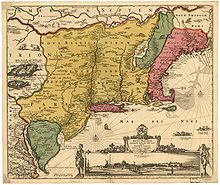