Not to be confused with Batam in Riau Islands of Indonesia. 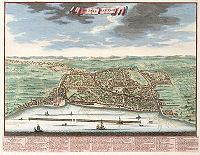 Banten city from illustration circa 1724.

Bantam (Indonesian: Banten) in Banten province near the western end of Java was a strategically important site and formerly a major trading city, with a secure harbor on the Sunda Strait through which all ocean-going traffic passed, at the mouth of Banten River that provided a navigable passage for light craft into the island's interior which itself provides a good access to the hinterland.

In the 5th century, Banten was part of the Kingdom of Tarumanagara. The Lebak relic inscriptions, found in lowland villages on the edge of Ci Danghiyang, Munjul, Pandeglang, Banten, were discovered in 1947 and contains 2 lines of poetry with Pallawa script and Sanskrit language. The inscriptions mentioned about the courage of king Purnawarman. After the collapse of the kingdom Tarumanagara following attack by Srivijaya, power in the western Java fell to the Kingdom of Sunda. The Chinese source, Chu-fan-chi, written circa 1200, Chou Ju-kua mentioned that in the early 13th Century, Srivijaya still ruled Sumatra, the Malay peninsula, and western Java (Sunda). The source identifies the port of Sunda as strategic and thriving, pepper from Sunda being among the best in quality. The people worked in agriculture and their houses were built on wooden poles (rumah panggung). However, robbers and thieves plagued the country.[1] It was highly possible that the port of Sunda mentioned by Chou Ju-kua was probably refer to the port of Banten.

According to Portuguese explorer, Tome Pires, in the early 16 th century the port of Bantam (Banten) was one of the important ports of the Kingdom of Sunda, along with the ports of Pontang, Cheguide (Cigede), Tangaram (Tangerang), Calapa (Sunda Kelapa) and Chimanuk (estuarine of Cimanuk river).[2]

As a trading city Bantam received an influx of Islamic influence in the early 16th century. Later in the 16th century Bantam became the seat of the powerful Banten Sultanate. The English, who started to sail to the East Indies from around 1600, established a permanent trading post in Bantam in 1603. In 1613 John Jourdain was appointed as Chief Factor there, holding the administrative post until 1616 (other than for a few months during 1615, when Thomas Elkington was Chief Factor); he was succeeded in 1616 by George Berkley, but from 1617 until 1630 the factory was under a chosen President. From 1630 until 1634 a succession of Agents were appointed annually, but from 1634 the series of Presidents resumed until 1652.

In the thirty years following 1603, the trading factories established by the English on the Coromandel Coast of India, such as those at Machilipatnam (estd. 1611) and Fort St. George (estd. 1639), reported to Bantam[3]. The Dutch East India Company also established a trading factory at Bantam in 1603. During the 17th century the Portuguese and Dutch fought for control of Bantam. Eventually the fact that the Dutch found that they could control Batavia (trading factory estd. 1611) more thoroughly than Bantam may have contributed to Bantam's decline.

South-Bantam or Bantan-Kidoel or Lebak was the place where the eponymous character in Multatuli's novel Max Havelaar acted as the assistant-resident.

Today, Bantam is a small local seaport, economically overpowered by the neighbouring port of Merak. In Bantam, the Chinese are an important component of the community.