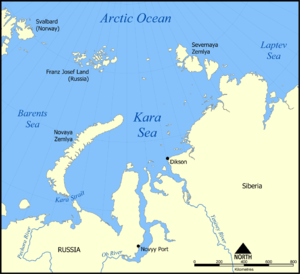 Map showing the location of the Kara Sea.

The Kara Sea (Russian: Ка́рское мо́ре or Karskoe More) is part of the Arctic Ocean north of Siberia. It is separated from the Barents Sea to the west by the Kara Strait and Novaya Zemlya, and the Laptev Sea to the east by the Severnaya Zemlya.

Compared to the Barents Sea, which receives relatively warm currents from the Atlantic, the Kara Sea is much colder, remaining frozen for over nine months a year.

The Kara receives a large amount of freshwater from the Ob, Yenisei, Pyasina, and Taimyra rivers, so its salinity is variable.

Its main ports are Novy Port and Dikson and it is important as a fishing ground although the sea is ice-bound for all but two months of the year. Significant discoveries of petroleum and natural gas, an extension of the West Siberian Oil Basin, have been made but have not yet been developed.

The International Hydrographic Organization defines the limits of the Kara Sea as follows:[1] 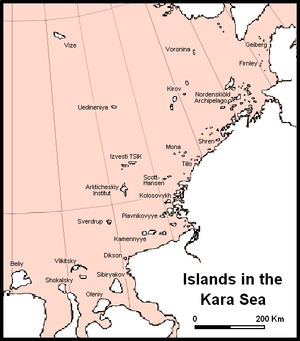 Main islands and island groups in the central and eastern regions of the Kara Sea.

There are many islands and island groups in the Kara Sea. Unlike the other marginal seas of the Arctic, where most islands lie along the coasts, in the Kara Sea many islands, like the Arkticheskiy Institut Islands, the Izvesti Tsik Islands, the Kirov Islands, Uedineniya or Lonely Island, Vize Island, and Voronina Island are located in the open sea of its central regions.

The largest group in the Kara Sea is by far the Nordenskiöld Archipelago, with five large subgroups and over ninety islands. Other important islands in the Kara Sea are Bely Island, Dikson Island, Taymyr Island, the Kamennyye Islands and Oleni Island.

The Kara Sea was formerly known as Oceanus Scythicus or Mare Glaciale and it appears with these names in old 16th century maps. Since it is closed by ice most of the year it remained largely unexplored until the late nineteenth century.

In 1556 Stephen Borough sailed in the Searchthrift to try to reach the Ob River, but he was stopped by ice and fog at the entrance to the Kara Sea. Not until 1580 did another English expedition, under Arthur Pet and Charles Jackman, attempt its passage. They too failed to penetrate it, and England lost interest in searching for the Northeast Passage.

In 1736-1737 Russian Admiral Stepan Malygin undertook a voyage from Dolgiy Island in the Barents Sea. The two ships in this early expedition were the Perviy, under Malygin's command and the Vtoroy under Captain A. Skuratov. After entering the little-explored Kara Sea, they sailed to the mouth of the Ob River. Malygin took careful observations of these hitherto almost unknown areas of the Russian Arctic coastline. With this knowledge he was able to draw the first somewhat accurate map of the Arctic shores between the Pechora River and the Ob River.

In 1878, Swedish explorer Adolf Erik Nordenskiöld on ship Vega sailed across the Kara Sea from Göteborg, along the coast of Siberia, and despite the ice packs, got to 180° longitude by early September. Frozen in for the winter in the Chukchi Sea, Nordenskiöld waited and bartered with the local Chukchi people. The following July, the Vega was freed from the ice, and continued to Yokohama, Japan. He became the first to force the Northeast Passage. The largest group of islands in the Kara Sea, the Nordenskiöld Archipelago, has been named in his honour. 1912 was a tragic year for Russian explorers in the Kara Sea. In that fateful year unbroken consolidated ice blocked the way for the Northern Sea Route and three expeditions that had to cross the Kara Sea became trapped and failed: Sedov's on vessel St. Foka, Brusilov's on the St. Anna, and Rusanov's on the Gercules. Georgy Sedov intended to reach Franz Josef Land on ship, leave a depot over there, and sledge to the pole. Due to the heavy ice the vessel could only reach Novaya Zemlya the first summer and wintered in Franz Josef Land. In February 1914 Sedov headed to the North Pole with two sailors and three sledges, but he fell ill and died on Rudolf Island. Georgy Brusilov attempted to navigate the Northeast Passage, was trapped in the Kara Sea, and drifted northward for more than two years reaching latitude 83°17 N. Thirteen men, headed by Valerian Albanov, left the vessel and started across the ice to Franz Josef Land, but only Albanov and one sailor (Alexander Konrad) survived after a gruesome three month ordeal. The survivors brought the ship log of St. Anna, the map of her drift, and daily meteorological records, but the destiny of those who stayed onboard remains unknown. In the same year the expedition of Vladimir Rusanov was lost in the Kara Sea. The prolonged absence of those three expeditions stirred public attention, and a few small rescue expeditions were launched, including Jan Nagórski's five air flights over the sea and ice from the NW coast of Novaya Zemlya.

After the Russian Revolution in 1917, the scale and scope of exploration of the Kara Sea increased greatly as part of the work of developing the Northern Sea Route. Polar stations, of which five already existed in 1917, increased in number, providing meteorologic, ice reconnaissance, and radio facilities. By 1932 there were 24 stations, by 1948 about 80, and by the 1970s more than 100. The use of icebreakers and, later, aircraft as platforms for scientific work was developed. In 1929 and 1930 the Icebreaker Sedov carried groups of scientists to Severnaya Zemlya, the last major piece of unsurveyed territory in the Soviet Arctic; the archipelago was completely mapped under Georgy Ushakov between 1930 and 1932.

Particularly worth noting are three cruises of the Icebreaker Sadko, which went farther north than most; in 1935 and 1936 the last unexplored areas in the northern Kara Sea were examined and small and elusive Ushakov Island was discovered.

In the summer of 1942, German Kriegsmarine warships and submarines entered the Kara Sea in order to destroy as many Russian vessels as possible. This naval campaign was named "Operation Wunderland". Its success was limited by the presence of ice floes, as well as bad weather and fog. These effectively protected the Soviet ships, preventing the damage that could have been inflicted on the Soviet fleet under fair weather conditions.

In October 2010, the Russian government awarded a license to Russian oil company Rosneft for developing the East-Prinovozemelsky oil and gas structure in the Kara Sea.[2][3]

There is concern about radioactive contamination from nuclear waste the former Soviet Union dumped in the sea and the effect this will have on the marine environment. According to an official "White Paper" report compiled and released by the Russian government in March 1993, the Soviet Union dumped six nuclear submarine reactors and ten nuclear reactors into the Kara Sea between 1965-1988.[4] Solid high- and low-level wastes unloaded from Northern Fleet nuclear submarines during reactor refuelings, were dumped in the Kara Sea, mainly in the shallow fjords of Novaya Zemlya, where the depths of the dumping sites range from 12 to 135 meters, and in the Novaya Zemlya Trough at depths of up to 380 meters. Liquid low-level wastes were released in the open Barents and Kara Seas. A subsequent appraisal by the International Atomic Energy Agency showed that releases are low and localized from the 16 naval reactors (reported by the IAEA as having come from seven submarines and the icebreaker "Lenin") which were dumped at five sites in the Kara Sea. Most of the dumped reactors had suffered an accident.[5]

The Great Arctic State Nature Reserve – the largest nature reserve of Russia and the whole Europe - was founded on May 11, 1993 by Resolution No.431 of the Government of the Russian Federation (RF). The Kara Sea Islands section (4,000 km²) of the Great Arctic Nature Reserve includes: the Sergei Kirov Archipelago, the Voronina Island, the Izvestiy TSIK Islands, the Arctic Institute Islands, the Svordrup Island, the Uedineniya Island and a number of smaller islands. This section represents rather fully the natural and biological diversity of Arctic sea islands of the eastern part of the Kara Sea.