Norrie Disease is a genetic disorder that primarily affects the eye and almost always leads to blindness. In addition to the congenital ocular symptoms, some patients suffer from a progressive hearing loss starting mostly in their 2nd decade of life, while another portion may be mentally challenged.

Patients with Norrie Disease may develop cataracts, leukocoria (a condition where the pupils appear white when light is shone on them), along with other developmental issues in the eye, such as shrinking of the globe and the wasting away of the iris.[1] Around 30-50% of them will also have developmental delay/mental retardation, psychotic-like features, incoordination of movements or behavioral abnormalities.[1] Most patients are born with normal hearing; however, the onset of hearing loss is very common in early adolescence.[2] About 15% of the patients are estimated to develop all the features of the disease.[3]

The disease affects almost only male infants at birth or soon after birth, because the disease is inherited X-linked recessive. Only in very rare cases, females have been diagnosed with Norrie Disease as well. The exact incidence number is unknown; only a few hundred cases have been reported so far. It is a very rare disorder that is not associated with any specific ethnic or racial groups.[4]

In 1961, a Danish ophthalmologist named Mette Warburg reported that a Danish family showed seven different cases of a hereditary degenerative disease throughout seven generations. The first member of the family to be thoroughly studied was a 12-month-old boy. At the child’s examination at three months, it was noticed that he was normal except for his lens appeared to be opaque and his irises were deteriorating.[5] The area behind his lens was filled with a growing yellowish mass. Five months later, his left eye was removed due to the suspicion of retinoblastoma, a cancerous tumor on the retina. An histologic examination showed a hemorrhagic necrotic mass in the posterior chamber, surrounded by undifferentiated (immature, undeveloped) glial tissue. The diagnosis included a pseudotumor of the retina, hyperplasia of retinal, ciliary, and iris pigment epithelium, hypoplasia and necrosis of the inner layer of the retina, cataract, and Phthisis bulbi. This means his eye was removed because the physician suspected a tumor, although it emerged that it was a developmental defect that lead to the malformation of inner parts of the eye. Because the eye was not functional, cells already began to die (necrosis) and the eye globe began to shrink due to its dysfunction (phthisi bulbi). In this Danish family, five of the seven people in these cases developed deafness later in life. Also, in four of the seven, mental capacity was determined low. After Warburg researched literature under various medical categories, she discovered 48 similar cases which she believed were cause by this disease as well.[5] She then suggested this disease be named after another famous Danish ophthalmologist, Gordon Norrie (1855–1941). Norrie was greatly recognized for his work with the blind and for being a surgeon at the Danish Institute for the Blind for 35 years.[6] 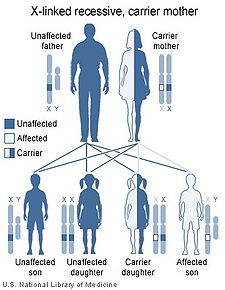 Norrie Disease is a genetic disorder caused by mutations in the NDP gene, located on Xp11.4 (GeneID: 4693). It is inherited in an X-linked recessive way from usually one of your parents. This means that almost only males are affected. Sons of affected men will not have the mutation, while all of their daughters will be genetic carriers of the mutation. They also usually show no clinical symptoms, but will inherit the mutation to 50% of their offspring. Daughters receiving the mutated gene will also be, like their mother, asymptomatic carriers, but 50% of their sons will express clinical symptoms.

Females are very unlikely to express clinical signs. One possible scenario leading to this (unlikely) case would be if both of their copies of the NDP gene bear mutations, which could be the case in consanguineous families or due to a spontaneous somatic mutation. Another explanation for affected females could be skewed X-Chromosome inactivation.

However, throughout history, there have been a few rare cases where females have shown symptoms associated with Norrie Disease such as retinal abnormalities and mild hearing loss.[4]

A mutation in NDP gene causes Norrie disease. The official name of the gene is “Norrie disease (pseudoglioma)”. The gene’s official symbol is NDP. The normal function of the NDP gene is to produce the instructions for creating a protein called norrin. For the normal development of the eye and other body systems, norrin is believed to be crucial.[7] Norrin also appears to be crucial in the specialization of the cells of the retina and the establishment of a blood supply to the inner ear and the tissues of the retina. The role of norrin in the specialization of retinal cells for their unique sensory is interfered by the mutation of NDP.[7] This results in an accumulation of immature retinal cells in the back of the eye. When norrin’s role in the establishment of blood vessels supplying the eye is disrupted, eventually the tissues will break down.[7]

Norrin is not only important in the development of the eye. The mutation of the NDP gene can affect other systems of the body as well. The most severe problems are caused by chromosomal deletions in the region of the NDP gene, causing the prevention of the gene product, or even that of the neighboring MAO genes. When the mutations simply change a single amino acid in norrin, the effects are less widespread and severe. However, the location and type of the NDP mutation not necessarily determine the degree of severity of the disease, since highly varying clinical signs have been diagnosed in patients carrying the very same mutation. Therefore, the involvement of other modifying genes is very likely. On the other hand, if certain structurally important amino acids are changed (e.g. the Cysteines forming the putative cystine knot), the clinical outcome has been shown to be more serious.[8]

As of right now, Norrie Disease and other NDP related diseases are diagnosed with the combination of clinical findings and molecular genetic testing. Molecular genetic testing identifies the mutations that cause the disease in about 85% of affected males.[1] Clinical diagnoses rely on ocular findings. Norrie Disease is diagnosed when grayish-yellow fibrovascular masses are found behind the eye from birth through three months. Doctors also look for progression of the disease from three months through eight-ten years of age. Some of these progressions include cataracts, iris atrophy, shallowing of anterior chamber, and shrinking of the globe.[1] By this point, the vision is light perception impaired or non-existent.

Molecular genetic testing is used for more than an initial diagnosis. It is used to confirm diagnostic testing, for carrier testing females, prenatal diagnosis, and preimplantion genetic diagnosis. There are three types of clinical molecular genetic testing. In approximately 85% of males, mis-sense and splice mutations of the NDP gene and partial or whole gene deletions are detected using sequence analysis.[1] Deletion/duplication analysis can be used to detect the 15% of mutations that are submicroscopic deletions. This is also used when testing for carrier females. The last testing used is linkage analysis, which is used when the first two are unavailable. Linkage analysis is also recommended for those families who have more than one member affected by the disease.[1]

The most prominent symptoms of Norrie Disease are ocular. The first visible finding is Leukocoria, a grayish-yellow pupillary reflex that originates from a mass of unorganized tissue behind the lens. This material, which possibly includes an already detached retina, may be confused with a tumor and thus is termed pseudoglioma.[1] [4] However, an affected baby may have a normally sized eye globe and inconspicuous iris, anterior chamber, cornea and intraocular pressure.

Over the first few months of life, complete or partial retinal detachment evolves. From the time they’re a baby through childhood, the patient may undergo progressive changes in the disease.[1] These progressions include the formation of cataracts, deterioration of the iris with adhesions forming between the iris and the lens or the cornea, and shallowing of the anterior chamber which increases intraocular pressure that can become painful.[1] As the situation worsens, there is corneal opacification, where the cornea becomes opaque, and band keratopathy. Intraocular pressure is lost and the globe shrinks. In the last stage of Norrie disease, the globes appear small and sunken in (phthisis bulbi) and the cornea appears to be milky .[1]