Chronic granulomatous disease (CGD) (also known as Bridges–Good syndrome, Chronic granulomatous disorder, and Quie syndrome[1]) is a diverse group of hereditary diseases in which certain cells of the immune system have difficulty forming the reactive oxygen compounds (most importantly, the superoxide radical) used to kill certain ingested pathogens.[2] This leads to the formation of granulomata in many organs.[3] CGD affects about 1 in 200,000 people in the United States, with about 20 new cases diagnosed each year.[4][5]

This condition was first discovered in 1950 in a series of 4 boys from Minnesota, and in 1957 was named "a fatal granulomatosus of childhood" in a publication describing their disease.[6][7] The underlying cellular mechanism that causes chronic granulomatous disease was discovered in 1967, and research since that time has further elucidated the molecular mechanisms underlying the disease.[8] In 1986, the x-linked form of CGD was the first disease for which positional cloning was used to identify the underlying genetic mutation.

Chronic granulomatous disease is the name for a genetically heterogeneous group of immunodeficiencies. The core defect is a failure of phagocytic cells to kill organisms that they have engulfed because of defects in a system of enzymes that produce free radicals and other toxic small molecules. There are several types, including chronic X-linked disease, chronic b-negative disease, X-linked cytochrome b-positive disease, x-linked variant disease, and atypical granulomatous disease.[9]

Classically, patients with chronic granulomatous disease will suffer from recurrent bouts of infection due to the decreased capacity of their immune system to fight off disease-causing organisms. The recurrent infections they acquire are specific and are, in decreasing order of frequency:

Most people with CGD are diagnosed in childhood, usually before age 5.[10] Early diagnosis is important since these people can be placed on antibiotics to ward off infections before they occur. 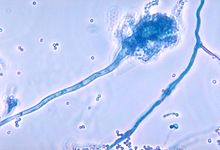 Microscopic image of the fungus, Aspergillus fumigatus, an organism that commonly causes disease in people with chronic granulomatous disease.

Most cases of chronic granulomatous disease are transmitted as a mutation on the X chromosome and are thus called an "X-linked trait".[10] The affected gene on the X chromosome codes for the gp91 protein p91-PHOX (p is the weight of the protein in kDa; the g means glycoprotein). CGD can also be transmitted in an autosomal recessive fashion (via CYBA and NCF1) and affects other PHOX proteins. The type of mutation that causes both types of CGD are varied and may be deletions, frame-shift, nonsense, and missense.[14][15]

A low level of NADPH, the cofactor required for superoxide synthesis, can lead to CGD. This has been reported in women who are homozygous for the genetic defect causing glucose-6-phosphate dehydrogenase deficiency (G6PD), which is characterised by reduced NADPH levels.[citation needed] 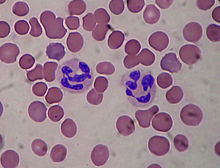 Two neutrophils among many red blood cells. Neutrophils are one type of cell affected by chronic granulomatous disease.

Phagocytes (i.e., neutrophils, monocytes, and macrophages) require an enzyme to produce reactive oxygen species to destroy bacteria after they ingest the bacteria in a process called phagocytosis, a process known as the respiratory burst. This enzyme is termed "phagocyte NADPH oxidase" (PHOX). The initial step in this process involves the one-electron reduction of molecular oxygen to produce superoxide anion, a free radical. Superoxide then undergoes a further series of reactions to produce products such as hydrogen peroxide (through the action of superoxide dismutase), hydroxyl radical and hypochlorite (bleach - through the action of myeloperoxidase on hydrogen peroxide). The reactive oxygen species this enzyme produces are toxic to bacteria and help the phagocyte kill them once they are ingested. Defects in one of the four essential subunits of this enzyme can all cause CGD of varying severity, dependent on the defect. There are over 410 known possible defects in the PHOX enzyme complex that can lead to chronic granulomatous disease.[3]

The nitroblue-tetrazolium (NBT) test is the original and most widely-known test for chronic granulomatous disease.[16] It is positive in CGD, meaning that it does not turn blue (a "positive" test result indicates that the disease in question is present). The higher the blue score, the better the cell is at producing reactive oxygen species. This test depends upon the direct reduction of NBT by superoxide free radical to form an insoluble formazan. This test is simple to perform and gives rapid results, but only tells whether or not there is a problem with the PHOX enzymes, not how much they are affected. A similar test uses dihydrorhodamine (DHR) where whole blood is stained with DHR, incubated, and stimulated to produce superoxide radicals which reduce DHR to rhodamin in cells with normal function. An advanced test called the cytochrome C reduction assay tells physicians how much superoxide a patient's phagocytes can produce. Once the diagnosis of CGD is established, a genetic analysis may be used to determine exactly which mutation is the underlying cause.[citation needed]

Management of chronic granulomatous disease revolves around two goals: 1) diagnose the disease early so that antibiotic prophylaxis can be given to keep an infection from occurring, and 2) educate the patient about his or her condition so that prompt treatment can be given if an infection occurs.[citation needed]

Physicians often prescribe the antibiotic trimethoprim-sulfamethoxazole to prevent bacterial infections.[17] This drug also has the benefit of sparing the normal bacteria of the digestive tract. Fungal infection is commonly prevented with itraconazole,[18] although a newer drug of the same type called voriconazole may be more effective.[19] The use of this drug for this purpose is still under scientific investigation.

Interferon, in the form of interferon gamma-1b (Actimmune) is approved by the Food and Drug Administration for the prevention of infection in CGD. It has been shown to prevent infections in CGD patients by 70% and to reduce their severity. Although its exact mechanism is still not entirely understood, it has the ability to give CGD patients more immune function and therefore, greater ability to fight off infections. This therapy has been standard treatment for CGD for several years.[20]

Hematopoietic stem cell transplantation from a matched donor is curative although not without significant risk.[21][22]

There are currently no studies detailing the long term outcome of chronic granulomatous disease with modern treatment. Without treatment, children often die in the first decade of life. The increased severity of X-linked CGD results in a decreased survival rate of patients, as 20% of X-link patients die of CGD-related causes by the age of 10, in contrast to an approximate age of 35 in autosomal recessive patients.[23]

Chronic granulomatous disease affects all people of all races, however, there is limited information on prevalence outside of the United States. One survey in Sweden reported an incidence of 1 in 220,000 people,[24], while a larger review of studies in Europe suggested a larger 1 in 250,000 people.[23]

This condition was first described in 1954 by Janeway, who reported five cases of the disease in children.[25] In 1957 it was further characterized as "a fatal granulomatosus of childhood".[6][7] The underlying cellular mechanism that causes chronic granulomatous disease was discovered in 1967, and research since that time has further elucidated the molecular mechanisms underlying the disease.[8] Use of antibiotic prophylaxis, surgical abscess drainage, and vaccination lead to the term "fatal" being dropped from the name of the disease as children survived into adulthood. The oldest person to suffer from Chronic Granulomatos Disease was Mr. Jackie Ray Johnson of Fredericksburg, Virginia who died in 2002 at the age of 63.

Gene therapy is currently being studied as a possible treatment for chronic granulomatous disease. CGD is well-suited for gene therapy since it is caused by a mutation in single gene which only affects one body system (the hematopoietic system). Viruses have been used to deliver a normal gp91 gene to rats with a mutation in this gene, and subsequently the phagocytes in these rats were able to produce oxygen radicals.[26]

In 2006, two human patients with X-linked chronic granulomatous disease underwent gene therapy and blood cell precursor stem cell transplantation to their bone marrow. Both patients recovered from their CGD, clearing pre-existing infections and demonstrating increased oxidase activity in their neutrophils. However, long-term complications and efficacy of this therapy are unknown.[27]