Rock Hill is the largest city in York County, South Carolina and the fifth-largest city in the state. It is also the third-largest city of the Charlotte metropolitan area, behind Charlotte and Concord, North Carolina. The population was 66,154 as of the 2010 census.[3] Rock Hill has undergone rapid growth between 2000 and 2010 with a 33% growth rate. The forecast population for 2020 is near 100,000 residents (according to Rock Hill Economic Development).[citation needed] Rock Hill is located approximately 25 miles (40 km) south of Charlotte and approximately 70 miles (110 km) north of Columbia. 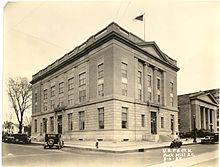 Indigenous peoples lived in the Piedmont for thousands of years. The historic Catawba Indian Nation lives near Rock Hill.

The European-American city was named for a flint hill of rock that was in the way of the Charlotte and South Carolina Railroad, which was building a rail line from Charlotte to Columbia. Much of this rock was removed to make way for the railroad, which built a depot at the site that eventually became known as Rock Hill. The city dates its history back to April 17, 1852, the day the first Rock Hill Post Office opened, even though the town was not officially incorporated until 1870. Rock Hill celebrated its centennial in 1952 and its sesquicentennial in 2002.

Four unincorporated communities of York County were annexed to the city: Boyd Hill in the late 1940s, Ebenezer and Mexico in the 1960s, and Oakdale in the 1980s.

Rock Hill was the setting for two significant events in the civil rights movement. In February 1961, nine African-American men went to jail at the York County prison farm after staging a sit-in at a segregated McCrory's lunch counter in downtown Rock Hill. Their offense was reported to be "refusing to stop singing hymns during their morning devotions." The event gained nationwide attention because the men followed an untried strategy called "jail, no bail," which lessened the huge financial burden civil rights groups were facing as the sit-in movement spread across the South.[4] This event received widespread national news coverage, and the tactic was adopted by other civil rights groups. They became known as the Friendship Nine because eight of the nine men were students at Rock Hill's Friendship Junior College.[5]

Later that year, Rock Hill was the first stop in the Deep South for a group of 13 Freedom Riders, who boarded buses in Washington, D.C., and headed South to test the 1960 ruling by the U.S. Supreme Court outlawing racial segregation in all interstate public facilities. When civil rights leader John Lewis and another man stepped off the bus at Rock Hill, they were beaten by a white mob. In 2002, Lewis, by then a U.S. congressman from Georgia, returned to Rock Hill, where he spoke at Winthrop University and was given the key to the city. On January 21, 2008, Rep. Lewis returned to Rock Hill again and spoke at the city's Martin Luther King, Jr. holiday observance. Mayor Doug Echols officially apologized to him on the city's behalf for the Freedom Riders' treatment in the city.

The symbols of the city are the four Civitas statues, erected in 1991 at the Gateway corridor on Dave Lyle Boulevard.[citation needed] Each holds a disc that symbolizes the four drivers of the economy in the city (Gears of Industry, Flames of Knowledge, Stars of Inspiration, and Bolts of Energy). The Civitas statues are 22-foot-tall (6.7 m) structures made of bronze and created by the New York sculptor Audrey Flack. These were originally planned to be placed in Uptown Charlotte, but were offered to the city of Rock Hill. The Civitas complex was designed as a female version of Michelangelo’s David. The sculptor was inspired by the similarities in history between the cities of Rock Hill and Florence, Italy.

At the time of the commission of David, Florence was a city of 45,000 people whose once vibrant textile industry was slowly fading; the competition from their much larger neighbor Rome was affecting Florence’s growth. Rock Hill’s size and textile history was similar to Florence's when the Civitas was created. The sculpture reflects the spirit of Rock Hill’s textile heritage in the clothing and hair, which suggest billowing ribbons of material. That material transforms into wings, representing the textile history as the foundation to give wings to the city for growth.[6] In 1992, a fifth Civitas statue by Flack was placed at City Hall in downtown Rock Hill.

The Gateway intersection where the four Civitas statues stand is circular to symbolize unity, teamwork and togetherness. The columns that stand beside the Civitas were a gift to the city from First Union Corporation, and are regarded as one of the area’s most treasured historical artifacts. They represent Rock Hill’s commitment to preserve and enhance the history of the city. 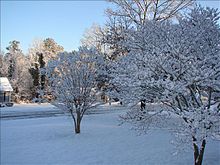 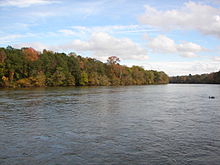 A view of the Catawba River at River Park

Rock Hill is located along the Catawba River in the Piedmont of South Carolina. The city sits at an elevation of around 676 feet (206 m) above sea level. The city is located approximately 150 miles (240 km) from the Atlantic Ocean and 75 miles (121 km) from the Blue Ridge Mountains.

Rock Hill has a humid subtropical climate, characterized by humid summers and cool dry winters. Precipitation does not vary greatly between seasons. July is the hottest month, with an average high temperature of 91°F and an average low temperature of 71°F.[7] The coldest month of the year is January, when the average high temperature is 53°F and the average low temperature is 33°F.[7] The warmest temperature ever recorded in the city was 106°F in 1983 and tied in 2007.[8] The coldest temperature ever recorded in the city was -4°F in 1985.[9] While snow is not common in most southern cities, Rock Hill receives about 8-10" of total snow accumulation on average yearly.[citation needed]

There were 25,966 households out of which 29.9% had children under the age of 18 living with them, 38.1% were married couples living together, 18.8% had a female householder with no husband present, and 38.2% were non-families. 30.3% of all households were made up of individuals and 8.6% had someone living alone who was 65 years of age or older. The average household size was 2.43 and the average family size was 3.04.

Rock Hill's economy was once dominated by the textile industry, but the restructuring of that industry in moving jobs overseas has caused a decline in the local economy. The median income for a household in the city was $37,336, and the median income for a family was $45,697. Males had a median income of $32,156 versus $24,181 for females. The per capita income for the city was $18,929. About 9.7% of families and 14.0% of the population were below the poverty line, including 16.2% of those under age 18 and 12.0% of those age 65 or over. The unemployment rate of the city was 8.7 percent and 11,874 of the 71,459 residents lived and worked in the city with a daytime population change of +5,208 as of March 2011.[10] The city is transitioning to a retail and manufacturing economy, and has been working to attract national and global companies.

The city of Rock Hill is a thriving residential community outside of Charlotte that has been recognized by awards for its outstanding schools, parks, and its southern hospitality. The city is a three-time award winner of America's Promise Alliance "100 Best Communities for Young People".[12] along with being a two-time "All-American City" award winner. 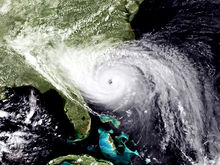 On November 26, 1926 a destructive tornado struck downtown Rock Hill. It was the day after Thanksgiving, rather late in the season for such a violent storm. The "black as ink twister" took less than 10 minutes to change the face of the business section. The storm touched down in western York County, and entered Rock Hill from the west. Once in the town, the twister cut a path about three blocks wide, leaving 60 homes heavily damaged, the hospital roof removed, and cars flipped or crushed. By the end, the total damage for the whole town was $150,000. The tornado was responsible for one death and 12 injuries within Rock Hill.

Hurricane Hugo struck the city on the morning of September 22, 1989. The storm ripped through the city with sustained winds over 90 MPH, toppling massive oak and pine trees. Schools were closed for weeks because of widespread damage to roads and facilities. The total damage cost for the entire state of South Carolina was around $4.2 billion. The storm was a category 3 when it entered the county and was a category 2 as it left the county.

A complex series of low pressure systems moved across South Carolina from February 25–27 of 2004. Starting as a mix of snow and sleet, the storm became all snow as the low pulled off the Carolina coast. Cold arctic air settled over the Carolinas and dumped up to 24 inches of snow, with lightning. Sustained winds over 40 MPH across Rock Hill knocked out power, resulting in schools' closing for a week. It was the worst overall blizzard to hit the area.

Rock Hill has two local airports. The Rock Hill Municipal Airport is a municipal airport for the city of Rock Hill and serves non-commercial flights. The airport is located just minutes from Rock Hill's Central business district. Also called Bryant Field, it was named for Robert E. Bryant, an aviator with two international records and an inductee in the South Carolina Aviation Hall of Fame (The name is no longer used for the airport because of confusion with Bryant Field (airport)). It is owned and operated by the City of Rock Hill, but York County is also represented on the Airport Commission. The other local airport, the Charlotte-Douglas International Airport, is one of the busiest airports in the United States and is located 20 miles from Rock Hill in Charlotte, North Carolina. 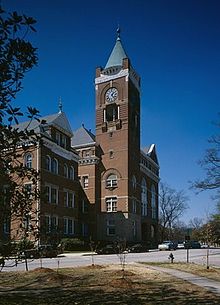 There are three colleges within Rock Hill. The most prominent institution of higher learning in Rock Hill is Winthrop University, founded in 1886 as a women's college. It is a thriving, public, co-ed four-year liberal arts college with an annual enrollment of well over 7,000 students. Clinton Junior College is a historically black, two-year institution founded by the African Methodist Episcopal Zion Church in 1894. It is now a community college for the city of Rock Hill and York County.[15] York Technical College opened in Rock Hill in 1964. This two-year community college offers associate degrees and provides continuing education for approximately 9,000 area residents annually and is growing each year.[16]

PBS affiliate WNSC-TV (Channel 30) and CN2, a daily cable news program produced by Comporium Communications for York, Chester, and Lancaster counties. MyNetworkTV Charlotte affiliate WMYT-TV Channel 55, is licensed to the city of Rock Hill but its studios are shared with WJZY-TV in Mecklenburg County, North Carolina.

Rock Hill hosts several seasonal events. Each spring there is a festival called Come-See-Me which brings more than 125,000 people to the city each year from across the country. Come-See-Me was voted as the number one South Carolina Festival and has been featured in Southern Living magazine. On Independence Day, Rock Hill hosts its Red, White, and Boom Festival. A winter festival, called Christmasville Rock Hill, is held annually each December in Downtown Rock Hill.

The city operates under a Mayor-council government. The governing body is composed of a mayor and six members. The mayor is determined through a nonpartisan, at-large election for a four-year term of office while Council Members are chosen through nonpartisan, single-member district elections. Council members are elected to staggered four-year terms of office.

The city of Rock Hill and its surrounding area is home to numerous attractions. 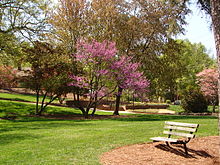 Rock Hill is home thirty-one parks, four recreational centers, one botanical garden, along with the many nature trails.

The Rock Hill Cardinals were a Western Carolinas League baseball team affiliated with the St. Louis Cardinals from 1963-1968.

The Winthrop Eagles is Winthrop University's Athletic Department and is affiliated with The National Collegiate Athletic Association (NCAA).

The city is also home to many sports championships including the National Youth Soccer Championship as well as many more hosted by the city of Rock Hill Department of Parks and Recreation.

Additional shopping centers across the city feature other well-known national and local retailers.