Marshall William Faulk (born February 26, 1973) is a former American football running back who played in the National Football League. He is currently an analyst for NFL Total Access, Thursday Night Football, and NFL GameDay Morning on the NFL Network. He played football in college for San Diego State University, before being drafted by the Indianapolis Colts in the 1994 NFL Draft. Following the 1998 season Faulk was traded to the St. Louis Rams. Marshall is one of the 3 players (Marcus Allen & Tiki Barber) to reach at least 10,000 rushing yards and 5,000 receiving yards in his career and the only one to have 12,000 yards rushing, 6,000 yards receiving.[1] His seven two-point conversions are an NFL record.[2] His 5 games of 250+ yards from scrimmage and 14 games of 200+ yards from scrimmage are also NFL records. Marshall Faulk is the only player to have 70+ rushing touchdowns and 30+ receiving touchdowns. Due to a knee injury, Faulk did not play in the 2006 season. During the season he became an analyst for the NFL Network. Faulk announced on March 26, 2007 that he had officially retired from football at the annual NFL Owners meeting.[3] Faulk had his #28 jersey retired by the St. Louis Rams on December 20, 2007. He was elected to the Pro Football Hall of Fame in 2011. 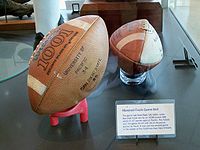 Marshall Faulk's game ball from the September 14, 1991 game when he ran for a NCAA-record 386 yards and scored 44 points. Faulk did this in his second game as a true freshman for San Diego State.

After playing at George Washington Carver High School in New Orleans, Marshall Faulk went on to a stand-out career as a running back at San Diego State University, compared to Gale Sayers, Roger Craig and Thurman Thomas with his ability to rush and receive.[citation needed] In one of the most prolific performances of his entire career, he ran all over the University of the Pacific in just his second collegiate game on September 15, 1991. In 37 carries, he racked up 386 yards and scored seven touchdowns, both records for freshmen (the 386 yards were then an NCAA-record). "Faulk had scoring runs of 61, 7, 47, 9, 5, 8 and 25 yards." [4] That performance sparked one of the greatest freshman seasons in NCAA history, gaining 1,429 yards rushing, with 23 total touchdowns (21 rushing), and 140 points scored. Although in the next two seasons he would not replicate the success of his freshman year, he showed in his final season at SDSU he was still an all-purpose back, catching 47 passes for 640 yards, which aided him in ranking 3rd in all-purpose yardage that year and 2nd in scoring. Faulk left San Diego State University with many of the school's offensive records, amongst them 62 career touchdowns, which is the 8th most in NCAA history.[4]

Faulk was drafted 2nd overall in the 1994 NFL Draft by the Indianapolis Colts, who were in desperate need of a running game. On July 25, 1994, Faulk signed a seven-year $17.2 million contract and received a $5.1 million signing bonus.[7] Faulk responded by rushing for 1,282 yards, 11 touchdowns, and one receiving touchdown.[8] The Colts improved to 8-8. Marshall Faulk, later that season, would become the first NFL player to win both the Offensive Rookie of the Year Award and the Pro Bowl’s Most Valuable Player Award in the same season.

The next season Faulk rushed for 1,078 yards and 14 total touchdowns.[8] The Colts made the postseason, going 9-7, and narrowly missed the Super Bowl after a close loss to the Pittsburgh Steelers in the AFC Championship Game which Faulk missed due to a nagging toe injury.

The next year was a miserable one for Faulk. Because of a toe injury he suffered earlier in the season, he rushed for only 587 yards, with a 3 yards-per-carry average.[8] He recovered from the injury and rushed for 1,000+ yards in each of the next two seasons, setting a new personal high with 1,319 in 1998.[8] He also caught 86 passes for 906 yards that year and was the NFL's leader in total yards from scrimmage with an astounding 2,227, beating out Denver's MVP running back Terrell Davis by 2 yards, while also finishing 4th in the league in receptions. It would also be the first of an NFL-record 4 consecutive 2,000+ total-yard seasons.

Faulk was traded to the St. Louis Rams the following season due to problems he referred to as "misunderstandings."[citation needed] Faulk had missed practices and was considered holding out for a new contract. Colts president Bill Polian did not want his young team's chemistry damaged, so he traded Faulk for second- and fifth-round picks in the upcoming draft (used to draft LB Mike Peterson and DE Brad Scioli). The Colts moved on at the position, drafting Edgerrin James in the first round. Faulk held out for twelve days as the details of his contract were worked out. On August 4, 1999, Faulk signed a seven-year, $45.2 million contract with the Rams, which was the biggest deal in team history‎ at the time. In it Faulk was guaranteed $9.6 million including a $7-million signing bonus. The problem in negotiations was the proposed fifth year, in which Faulk would get $7 million in salary and $5-million a roster bonus. The deal was structured to prevent Faulk from ever being tagged a transition or franchise player.[9] 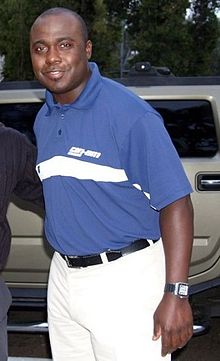 Marshall Faulk in 2008 in San Diego

In his first year in St. Louis, Faulk was the catalyst for "The Greatest Show on Turf", a nickname given to coordinator Mike Martz's aggressive Coryell-style offense. In this offense he put up some of the best all-purpose numbers in the history of the NFL. Faulk's patience and diligence in learning the Rams' offense paid off when he totaled an NFL record 2,429 yards from scrimmage, eclipsing Barry Sanders's record of 2,358 yards set in 1997 (which has since been broken by Chris Johnson in 2009). With 1,381 yards rushing (5.5 yards-per-carry average), 1,048 receiving yards, and scoring 12 touchdowns, Faulk joined Roger Craig as the only men to total 1,000+ yards in each category in a season.[8] He also broke the NFL season record for most receiving yards by a running back, previously held by Lionel James.[10] The Rams eventually went on to win Super Bowl XXXIV. In the game, Faulk was contained on the ground by Tennessee Titans head coach Jeff Fisher's defensive scheme, limiting him to just 17 rushing yards. This was perhaps due to the Titans' inability to stop the Rams' passing game, of which Faulk was a major part, recording 5 receptions for 90 yards. His 90 receiving yards were the second highest total by a running back in Super Bowl history. At the end of the season, he received the NFL Offensive Player of the Year Award and was a starter for the NFC squad in the 1999 Pro Bowl.

The following year, Faulk became the first running back in NFL history to lead his team in receptions five separate seasons (three in Indianapolis and twice in St. Louis). In addition, he was the NFL MVP and again the Offensive Player of the Year in 2000. He had 1,359 yards rushing in fourteen games and set a new NFL record with 26 total touchdowns, (a record that would soon be broken by Priest Holmes and then later by Shaun Alexander and LaDainian Tomlinson), despite missing two games due to injury.[8] He also averaged 5+ yards per carry again, this time with 5.4.[8] The Rams, however were not able to replicate the record they had the year prior. Even with the offense scoring the most points and yards during the "The Greatest Show on Turf" era, the defense gave up 470 points.

The Rams returned to the Super Bowl the next year as their defense returned to form, allowing only 273 points, and the offense once again scored over 500 points, with 503. Faulk had another excellent season, rushing 260 times for a career-high 1,382 yards (5.3 yards per carry), and catching 83 passes for 765 yards, for an NFC-leading total of 2,147 yards from scrimmage (second in the NFL only to Priest Holmes, who totaled 2,169 yards) and scoring 21 touchdowns despite once again missing 2 games to injuries.[8] Faulk won, for the third year in a row, the NFL's Offensive Player of the Year award, but finished second in a close vote to teammate Kurt Warner in the MVP vote. These years would be the climax of Faulk's career.

Faulk's injuries and age would soon catch up to him; 2001 was the last of his 1,000-yard rushing seasons,[8] and though he was still employed as the Rams' primary running back for several years following the 2001 season, he was no longer the player he had been in his prime, despite remaining a respected and effective player.

On July 29, 2002, Faulk signed a new seven-year, $43.95 million contract with the Rams. Faulk was about to enter the fourth year of his 1999 contract. In this new contract Faulk received a $10.7 million signing bonus.[11] In the 2002 season the Rams struggled and finished the year at 7-9. Faulk played in 14 games and started 10 and ended with 953 yards and 80 receptions. The following season he played in and started 11 games, finishing with 818 yards and 45 receptions as the Rams rebounded with a 12-4 record.

In 2004 Faulk split time with rookie Steven Jackson and played in 14 games and rushing for 774 yards. In February, 2005, Faulk agreed to a restructured contract to reduce his contract cap number. He was scheduled to make about $7.5 million in 2005. In the new contract received a total of $6 million in the next two seasons and a $2 million signing bonus was included.[12]

On July 21, the Rams announced that Faulk would undergo reconstructive knee surgery and miss the entire 2006 NFL season. During the season Faulk served as an analyst for the NFL Network's NFL Total Access.[citation needed]

On an edition of CBS's "NFL Gamecenter" on November 20, 2006, Faulk was the center of controversy when he stated that a "quarterback 'makes' the offensive line" and that he could pass-rush against his former teammate Orlando Pace, one of the league's premier pass-protectors, with success given enough attempts, belittling the importance of a good offensive line to a team. Immediately after the commercial break that ensued, he was nowhere to be found on the set.[citation needed]

During an NBC Sunday Night Football halftime show, Faulk was asked by one of the announcers, "So are you retired or not?" Faulk said that he was still a Ram, and would be a Ram for the rest of his life. He then said that if the Rams would have him back, he would play next year, as he was able to run full speed on his re-built knees, however on March 26, 2007, Faulk announced his retirement from football.

On November 29, 2007, the Rams announced that they would be retiring Faulk's number. The ceremony was during halftime of the Thursday night game against the Pittsburgh Steelers on December 20, 2007. In 2010 on "NFL Network presents The Top 100: NFL's Greatest Players", Faulk was voted the number 70 player of all time.[13]

Faulk is in his fifth season as an NFL Network analyst. He serves an analyst on NFL Total Access, where he is relied on to provide a player’s perspective on today’s game. He also appears on Thursday Night Football’s Thursday Night Kickoff Presented by Sears, Sprint Halftime Show, and Kay Jewelers Postgame show. On NFL Sundays, Faulk can be seen on NFL GameDay Morning which kicks off NFL Network’s full coverage of the NFL on Sunday. He also was inducted into the NFL Hall of Fame in 2011 he accomplished the outstanding achievement of being a first ballot hall of famer.

Faulk married Lindsay Stoudt in 2006 and they currently reside in San Diego, California[16] and has also moved his charitable foundation there.[17] Faulk's childhood friend Damian Warren helped him start his foundation. Faulk is also related to Kevin Faulk, running back for the New England Patriots.

In 2009, Faulk was also inducted by the San Diego Hall of Champions into the Breitbard Hall of Fame honoring San Diego's finest athletes both on and off the playing surface.[18]