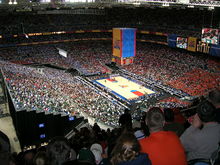 The Edward Jones Dome (more formally known as the Edward Jones Dome at America's Center, and previously known as The Trans World Dome (from 1995–2001) is a multi-purpose stadium in St. Louis, Missouri, and home of the St. Louis Rams of the NFL. It was constructed largely to lure an NFL team back to St. Louis, and to serve as a convention center. The Dome provides multiple stadium configurations that can seat up to 70,000 people. Seating levels include: a private luxury suite level, a private club seat and luxury suite level, a concourse level (lower bowl) and terrace level (upper bowl). The dome was completed in 1995.

The dome is bordered by America's Center to the west, Cole Street to the north, Broadway to the east and Convention Plaza to the south. It is accessible off Interstate 70 eastbound at the Convention Center/Broadway/Busch Stadium exit, I-70 westbound from Illinois at the Martin Luther King Jr./Veterans Memorial Bridge, and Interstate 55 southbound at the Gateway Arch/Busch Stadium exit. The stadium is also serviced by the Convention Center Metrolink rail station.

As part of a deal to sell the naming rights to Rams Park (now the Russell Athletic Training Center), the Rams' training facility in Earth City, Missouri, to sportswear manufacturer Russell Athletic, the Rams agreed to rename the Edward Jones Dome to Russell Athletic Field for the Rams' Monday Night Football game against the Chicago Bears on December 11, 2006. The renaming was for the one night only.

The dome has hosted five NFC playoff games, including the 1999 and 2001 NFC Championship games, both of which the Rams won.

On November 8, 1997, U2 performed at the Dome during their PopMart Tour.

On December 12, 1997, The Rolling Stones recorded a memorable show from their Bridges To Babylon Tour. The show was later released on VHS/DVD.

On July 2, 2001, 'N Sync performed at the Dome during their Pop Odyssey Tour.

The Dome has hosted an NCAA Men's Basketball Regional three times and is scheduled to host in 2012. In 2004, the St. Louis Regional saw Georgia Tech defeat Kansas in a final that required overtime, Tech have previously defeated Nevada while KU became the first team (and the only one to date) to score 100 points in a college basketball game in the building in its regional semifinal win over UAB. The Dome also hosted the 2007 Midwest Regional, where Florida, en route to winning its second consecutive national championship, defeated Butler and then Oregon, who had defeated UNLV in the other regional semifinal. In 2010, Michigan State eliminated Northern Iowa, and Tennessee knocked off Ohio State, before MSU beat UT to move on to the Final Four.

The Edward Jones Dome hosted the first Big 12 Conference football championship game in 1996 (Nebraska versus Texas). The third game, in 1998, was also held in the dome (Kansas State versus Texas A&M). The dome has also been a neutral site for regular-season college football matchups between the University of Illinois and the University of Missouri, promoted locally as the "Arch Rivalry". Missouri has won all six games (2002, 2003, 2007, 2008, 2009 & 2010).

Religious conferences and other events

The Dome became the site of the biggest indoor gathering in United States history, January 27, 1999 when Pope John Paul II held mass in the stadium. Over 104,000 people attended the service.

In 1999 the Rev. Billy Graham held The Greater St. Louis Billy Graham Crusade with well over 200,000 people attending in its four days. Michael W. Smith and Kirk Franklin were among the musical artists that performed.

The dome was also host to Nazarene Youth Conference "Water Fire Wind" in July 2007. The conference was noted for renovating 35 public schools in the St. Louis area, saving the school system over $150,000 in labor costs. The conference also built two homes in one week in conjunction with Habitat for Humanity, sponsored over 1,500 children in third-world areas (in partnership with Nazarene Compassionate Ministries and World Vision), and fed over 10,000 families in the St. Louis area for one week.

Starting in 2006, Edward Jones Dome has become the home of the InterVarsity Christian Fellowship Urbana missions conference which takes place every 3 years. The event had outgrown its former home on the University of Illinois campus in Urbana, Illinois (about 17,000 attendees in 2009).

From 2011 through at least 2013, the Dome will host the World Championship of the FIRST Robotics Competition. Over 300 teams from around the world qualify annually to compete in the championship held in mid-April. The FIRST LEGO League World Festival and FIRST Tech Challenge Championship occur at the same time, in different areas of the Dome. 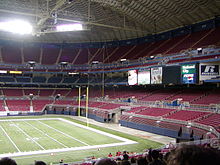 Interior view prior to 2010 renovations

Starting for the 2010 season, The Edward Jones Dome received a new permanent turf surface. The surface manufactured by AstroTurf, will be AstroTurf’s Magic Carpet II Conversion System, which features its GameDay 3D Synthetic Turf System. This system is similar to the original turf system that was in the dome from 1995-2004 whereas it can be rolled up and stored underground in a pit at the dome. The dome used a FieldTurf brand surface from 2005-2009.

The Edward Jones Dome also received a $30 million renovation in 2009, which replaced the scoreboards with LED video displays (one large in north endzone and one smaller in south endzone)and LED fascia boards around the bowl of the dome. The renovations also added new premium areas (Bud Light Zone and Clarkson Jewelers Club). Some of the paint work in the dome was lightened as well and painted in Rams colors (Blue, Gold, and White). In 2010, the Rams locker room was re-built and switched ends (from north endzone to south endzone). For 2011, New HD monitors are being installed throughout the dome in place of the older screens at concession stands and other areas.

Former St.Louis football Cardinals and former Rams football players are included in the Ring Of Fame in the Edward Jones Dome.