The Ohio Valley Conference (OVC) is a college athletic conference which operates in the midwestern and southeastern United States. It participates in Division I of the NCAA; the conference's football programs compete in the Football Championship Subdivision (FCS; formerly known as Division I-AA), the lower of two levels of Division I football competition. The OVC has 11 members, 9 of which compete in football in the conference.

The Ohio Valley Conference can trace its roots to 1941 when Murray State athletic director Roy Stewart, Eastern Kentucky athletic director Charles "Turkey" Hughes, and Western Kentucky public relations director Kelly Thompson first formulated the idea of establishing a regional athletics conference. The plan was put on hold due to World War II, but it was resurrected after the conclusion of the war. In 1948, the three schools joined with Louisville, Morehead State, and Evansville to form the Ohio Valley Conference.

Historically, OVC was a pioneer in racial desegregation. During times of racial segregation, league member Morehead State became one of the first non-traditionally black mid-southern institutions to accept a black student. In 1958, Marshall Banks received athletically-related aid at Morehead, which signed a second black athlete, Howard Murphy, a year later. In 1961, Murphy earned all-conference recognition as a halfback in football. With racial barriers broken, the rest of the institutions in the league began to provide educational and athletic opportunities to African-Americans.[1]

Today, the OVC is unique among NCAA Division I conferences in that it includes one historically black university, Tennessee State University, in a conference that otherwise consists of non-traditionally black institutions. All other HBCUs in NCAA Division I are members of either the MEAC or SWAC, conferences made up entirely of HBCUs. (Savannah State University is a probationary member of the MEAC; all others are full members of one of the two HBCU conferences.)

In the wake of Title IX, the OVC established women's championships in the sports of basketball, tennis and track in 1977, with cross country and volleyball added over the next four years. Those sports were initially governed by the Association of Intercollegiate Athletics for Women, but were continued when the NCAA became the governing body in 1982.[1] 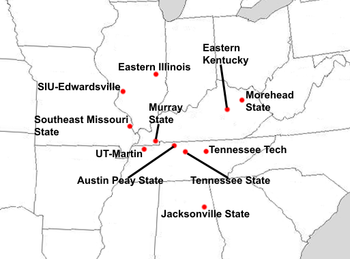 The Ohio Valley Conference currently offers 17 sports, 8 for men and 9 for women.

This is a partial list of the last 10 champions. For the complete history, see List of Ohio Valley Conference football champions.

$ - Jacksonville State (6-1) had the best record in the conference, but was ineligible for the championship due to Academic Progress Rate sanctions.

This is a partial list of the last 10 champions. For the complete history, see List of Ohio Valley Conference men's basketball champions.