Founded in 1911 as an education college, the university is composed of seven undergraduate colleges as well as a college of graduate studies offering more than 80 majors/degree programs through over 35 departments. Total enrollment in Fall, 2010 was 26,430, and in spring 2011 it was 24,660 (Spring enrollment is typically a bit lower than Fall enrollment). Of the Spring, 2011 total, 22,274 were undergraduates, and 2,386 were graduate students. It is currently the largest institution of higher learning in Tennessee by enrollment, and has the largest undergraduate enrollment in the state. In 2009, Middle Tennessee State University was ranked among the top 100 public universities by Forbes. Fall semester 2011 set a new MTSU record enrollment total of 26,442 students.

MTSU is part of the Tennessee Board of Regents, and is accredited by the Southern Association of Colleges and Schools Commission on Colleges.[5] Its current president is Sidney A. McPhee. 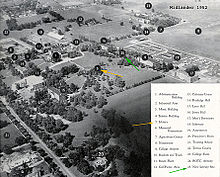 1952 aerial photograph of the university

In 1909, the General Assembly of the State of Tennessee moved "to provide for the improvement of the system of Public Education of the State of Tennessee, that is to say, to establish a General Education Fund." The major thrust of this "improvement" embodied in the legislative act that was to become known as the General Education Bill of 1909 was the establishment of three normals or teacher-training institutions. Following the intent of the act that one was to be located in each of the grand divisions of the state, the State Board of Education assigned the middle Tennessee institution to Murfreesboro.

Opening on September 11, 1911, with a two-year program for training teachers, Middle Tennessee State Normal School evolved into a four-year teachers college in 1925 with the power of granting the Bachelor of Science degree. In 1943, the General Assembly designated the institution a state college. This new status marked a sharp departure from the founding purpose and opened the way for expanding curricular offerings and programs. In 1965, the institution was advanced to university status.

During the progressive movement from a two-year normal to a university, several significant milestones may be identified. In 1936, the Bachelor of Arts program was added. Responding to the expressed needs of the institution's service area, the Graduate School was established in 1951. To effect better communications and improve administrative supervision, the schools concept was introduced in 1962.

As Middle Tennessee State University developed and grew, the Doctor of Arts program was added in 1970 and the Specialist in Education in 1974. These two degree programs became attractive centerpieces for other efforts to improve and enhance institutional roles. Library resources were dramatically increased and sophisticated computer services were developed to aid instruction and administration. A highly trained faculty enabled the University to continue growth in program offerings. In 1991, the University's six schools—five undergraduate and the graduate school—became colleges. In 1998, MTSU's Honors Program became the Honors College, the first in the state. In 2002, approval was granted to redesignate three D.A. programs to Doctor of Philosophy programs, expanding the progressive institution's offerings. Ph.D. degree offerings now include Computational Sciences, Mathematics and Science Education (including concentrations in Biology Education, Chemistry Education, Mathematics Education, and Interdisciplinary Science Education), Molecular Biosciences, Economics, English, Human Performance, Public History, and Literacy Studies.

Since 1911, MTSU has graduated more than 100,000 students. Despite the University's growth from a campus of 100 acres (0.40 km2), 125 students, and a faculty of 19, to an academic city of over 500 acres (2.0 km2), more than 26,000 students, and a faculty of over 900, the institution is still essentially a "people's university" with a concern for the diverse needs of the area that it serves. In the 1980s and 1990s, the institution dedicated resources to become a leader in technology, both in the classroom and in many services to students. In 1986, James McGill Buchanan ('40) became the first MTSU alumnus to be awarded the Nobel Prize. Buchanan received the Nobel Memorial Prize in Economic Sciences for his pioneering role in the development of the field of public choice, a way of studying the behavior of politicians and bureaucrats.[6]

MTSU is divided into eight colleges: 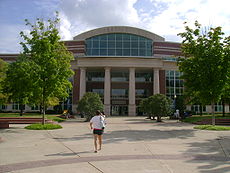 The College of Graduate Studies offers Master's degrees in nearly forty different areas, the Specialist in Education degree (Administration and Supervision, Curriculum and Instruction in Educational Leadership, Elementary School Education, and School Psychology), and the Doctor of Philosophy (Ph.D.) degree. MTSU's first Ph.D. was awarded in May 2003, though the university had awarded many Doctor of Arts (D.A.) degrees in the past.

The Mass Communications building at MTSU

The Department of Recording Industry (often called "RIM" for its former name "Recording Industry Management") is a department in the College of Mass Communications and the university's most popular program. Due to the large number of students in the program, only a limited number of slots are opened for students to gain candidacy to take upper-division classes. The RIM program is divided into three concentrations: Music Business, Commercial Songwriting, and Production & Technology. Music Business focuses on the marketing, management, and business aspects of the recording, touring, and publishing industries. The Production and Technology concentration focuses on recording, mixing, and mastering techniques, and specific technological trends of the industry. Commercial Songwriting is a blend of music business, songwriting, and music theory classes.

The department boasts five recording studios on campus, each open 24 hours a day.

The Rolling Stone College Guide recognized MTSU as having "one of the preeminent music business programs in the country."[9]

The Department of Aerospace offers an aerospace major with five concentrations: professional pilot, administration, technology, flight dispatch, and maintenance management. Each concentration has been accredited by the Aviation Accreditation Board International, and the aerospace program has been accredited since 1992.[10] The Department of Aerospace has a working agreement with the single-runway Murfreesboro Airport to provide many of its classes on-site. A decommissioned Boeing 727 airliner (number N117FE, donated by FedEx) is housed at the airport as a teaching tool.[11] Though no longer considered air-worthy, its engines remain functional, and can be restarted for training purposes. American Airlines has also donated a 727 cockpit procedure trainer to MTSU, which allows students to receive their flight engineer rating.[12] It is housed in the Business & Aerospace Building near the center of campus. The aerospace program's training fleet is made up of Diamond DA40 single-engine aircraft featuring glass cockpits, with an assortment of other single- and multi-engine aircraft available.[13] In 2010, the Department of Aerospace purchased ten radar simulators as well as a one-of-a-kind 360 degree control tower simulator to enhance training for its air traffic control students. These simulators allow students to experience life-like air traffic control scenarios that will aid in preparing them for training at the FAA Academy in Oklahoma City.[14]

The Concrete Industry Management program is a four year bachelor of science degree offered through the Engineering Technology and Industrial Studies department in the College of Basic and Applied Sciences. CIM develops graduates that are broadly educated with technical knowledge in addition to a solid business background. Known for its close industry ties and very high job placement rates, CIM has become the fastest growing major on campus and boasts around 300 students. It was started in 1996 by industry professionals and companies to meet the demand for educated professionals in an expanding and changing industry. CIM at MTSU was the first of its kind in the country. Other CIM programs have since started at Arizona State University and New Jersey Institute of Technology.

The campus takes the general shape of a rectangle and automobile traffic is mostly confined to the campus perimeter. Its borders, however, are generally defined by four high-traffic Murfreesboro thoroughfares: Greenland Boulevard on the north, Middle Tennessee Boulevard on the west, Rutherford Boulevard on the east, and East Main Street on the south. Parking lots for students border these streets on the outer perimeter of campus.

MTSU has never been linked directly to Interstate 24, though there are two main arteries from the interstate. One is via Exit 80, which connects to New Salem Highway, intersects with Middle Tennessee Boulevard, and eventually leads to campus. The other is through Exit 81, which connects to Church Street, intersects with Rutherford Boulevard, and leads to the university's main entrance at MTSU Boulevard.

Middle Tennessee State University is a "dry campus," meaning alcoholic beverages are prohibited at all times. 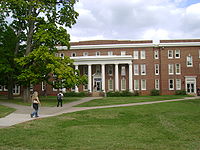 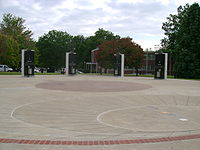 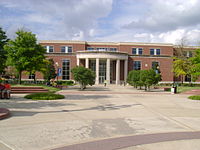 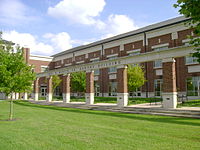 The western section of campus contains most of the college's original buildings. The college's oldest classroom building, Kirksey Old Main, lies adjacent to Peck Hall. The original dormitories - Monohan, Lyon, and Rutledge Halls - line the western edge of campus. Service buildings such as the James Union Building and the Cope Administration Building are on the western edge of campus. Liberal arts buildings, such as Peck Hall, Jones Hall, and Saunders Fine Arts, occupy the majority of west campus. Other structures, such as the Wiser-Patten Science Building and the Uranidrome, a Naked Eye Observatory also lie on the western part of campus. Athletic facilities such as the Murphy Center, Johnny "Red" Floyd Stadium, the Alumni Memorial Gym, Reese Smith Jr. Field, and the university's tennis courts are also on the western part of campus.

Central campus contains student service buildings and more dormitories. The Keathley University Center is the student union of MTSU, containing a cafeteria, bookstore, post office, and many student service offices. The new KUC and College of Education Building is currently being erected on the west side of campus between Cummings Hall and the Recreation Center. The Woodmore CyberCafe also contains a cafeteria for students. Dormitory halls such as Smith, Beasley, Sims, Gracy, and Judd lie central to campus. Classroom buildings, such as the Boutwell Dramatic Arts Building, Forrest Hall, and the Photography building are also located in the center of campus.

There are twenty on-campus dormitories on MTSU's campus, and two apartment complexes. 15% of MTSU's students live in on campus.[15] A large majority of students live in apartment complexes surrounding the university. Eight fraternity houses are located on Greek Row, and a few other fraternities have off-campus housing locations. No sorority houses have opened at MTSU.

The quad in front of the James E. Walker Library

Due to a significant emphasis on Mass Communication at MTSU, the campus has several mass media outlets. Sidelines is the campus's editorially independent, student-run newspaper, printed every Monday and Thursday. MTTV, a student-run TV station, is carried locally by Comcast. The two radio stations on MTSU's campus are WMTS, a student-run radio station, and WMOT, a publicly supported jazz radio station.

The university is host to approximately 225 student organizations, fraternities, and interest groups.[16] In addition, MTSU's Greek Life consists of the following social fraternities and sororities:

The MTSU mascot is "Lightning," a winged horse based on Pegasus from Greek mythology.