MSSU's is to provide an international education, defined by the state of Missouri as, "develop[ing] such academic support programs and public service activities it deems necessary and appropriate to establish international or global education as a distinctive theme of its mission."[1] The international mission was strongly promoted by the school's longtime president, Dr. Julio León, who served from 1982 to August 17, 2007. The international mission is supported by the selection of a country to serve as a fall semester theme (e.g., fall 2009: Canada,[2] fall 2010: Brazil,[3] fall 2011: Egypt[4]). During the themed semesters, lectures and programs dedicated to the selected country are held on campus.

The university formerly hosted a biennial international piano competition.[5] MSSU has also established a distance learning program to allow individuals to take courses with few or no campus visits. 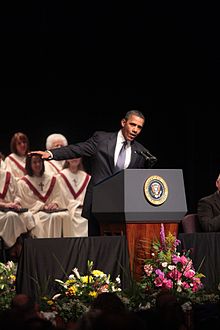 Missouri Southern State University was founded in 1937 as Joplin Junior College.[6] At its conception, Joplin Junior College had 114 students and only 9 faculty members. In 1964, residents of Jasper County, MO approved a $2.5 million bond issue to begin construction on a new campus, where the university is currently located. The new campus opened in the fall of 1967 with 2,399 students and 95 faculty members. In 1977, the school was renamed Missouri Southern State College and officially became a state-assisted four-year college and part of the state of Missouri's higher education system. In 2003, the Missouri General Assembly authorized the renaming of the college to Missouri Southern State University - Joplin; in 2005 the university dropped Joplin from its name.

In 1967, the campus was home to six buildings. The Taylor Performing Arts center was completed in 1973 and the Richard M. Webster Communications and Social Science Building opened in August 1992.

Missouri Southern recently finished construction on a health sciences building. The building, which had its groundbreaking on May 19, 2008, was built with money secured by MOHELA and distributed to MSSU by the state of Missouri. The Missouri General Assembly had entertained the addition of the Joplin Regional Center, owned by the Missouri Department of Mental Health, to Missouri Southern's campus in spring of 2009.[7]

The school is about 30 blocks northeast of the worst of the devastation of the 2011 Joplin tornado which destroyed much of southern Joplin on May 22, 2011—one day after the school's graduation. Joplin High School had just completed its school graduation on the campus shortly before the tornado. The Leggett and Platt Athletic Center was used as an emergency shelter for victims. Billingsly Student Center was the headquarters for volunteer efforts run by Americorps St. Louis and was the coordination area for identifying victims and survivors. On May 29, 2011, Barack Obama inspecting the damage spoke at the Taylor Performing Arts Center.[8][9]

The campus has two traditional dormitories, eight apartment style housing complexes, and one suite-style dormitory. The dormitories are McCormick and Blaine Halls; the apartments are Gockel, Stegge, Dishman, Dryer, Stone, Headlee, Maupin, and Mitchell Halls; the suite-style dorms are located in East Hall. Also a part of the residence area of campus is the Mayes Student Life Center, which is home to the University's cafeteria, weight room, residence computer labs, and commons area. These dorms houses about 600 students. There are plans to build an additional dormitory in the near future.

MSSU has no greek housing.

There are over 70 student organizations. These organizations range from ethnic to political, religious to special interest.

MSSU Student Senate is the official voice of the student body at Missouri Southern State University. SS strives to find solutions to campus issues by making policy recommendations to the administration. Ss is a forum for problems, concerns, questions, suggestions, and ideas as they relate to student life on campus. SS serves as the governing body for all students and more than 70 student organizations on campus. SS was established in MSSU's early years and has been active on campus ever since. SS is entirely funded by student fees, receiving a budget of $20,000 each academic year. Meetings are held once a week on Wednesdays at 5:00 P.M. and are open to the public.

The Campus Activities Board (CAB) orchestrates activities and programs in the Billingsly Student Union and around campus. CAB is a student-run programming board dedicated to enhancing the college experience at Missouri Southern. By effectively utilizing the Student Involvement Fee, CAB aims to provide educational, entertaining, cultural, and leisure opportunities to complement the students' academic experience.

Missouri Southern's mascot is the Lions. The Lions play in NCAA Division II and in the Mid-America Intercollegiate Athletic Association. MSSU fields 6 men's and 6 women's sports.[11]