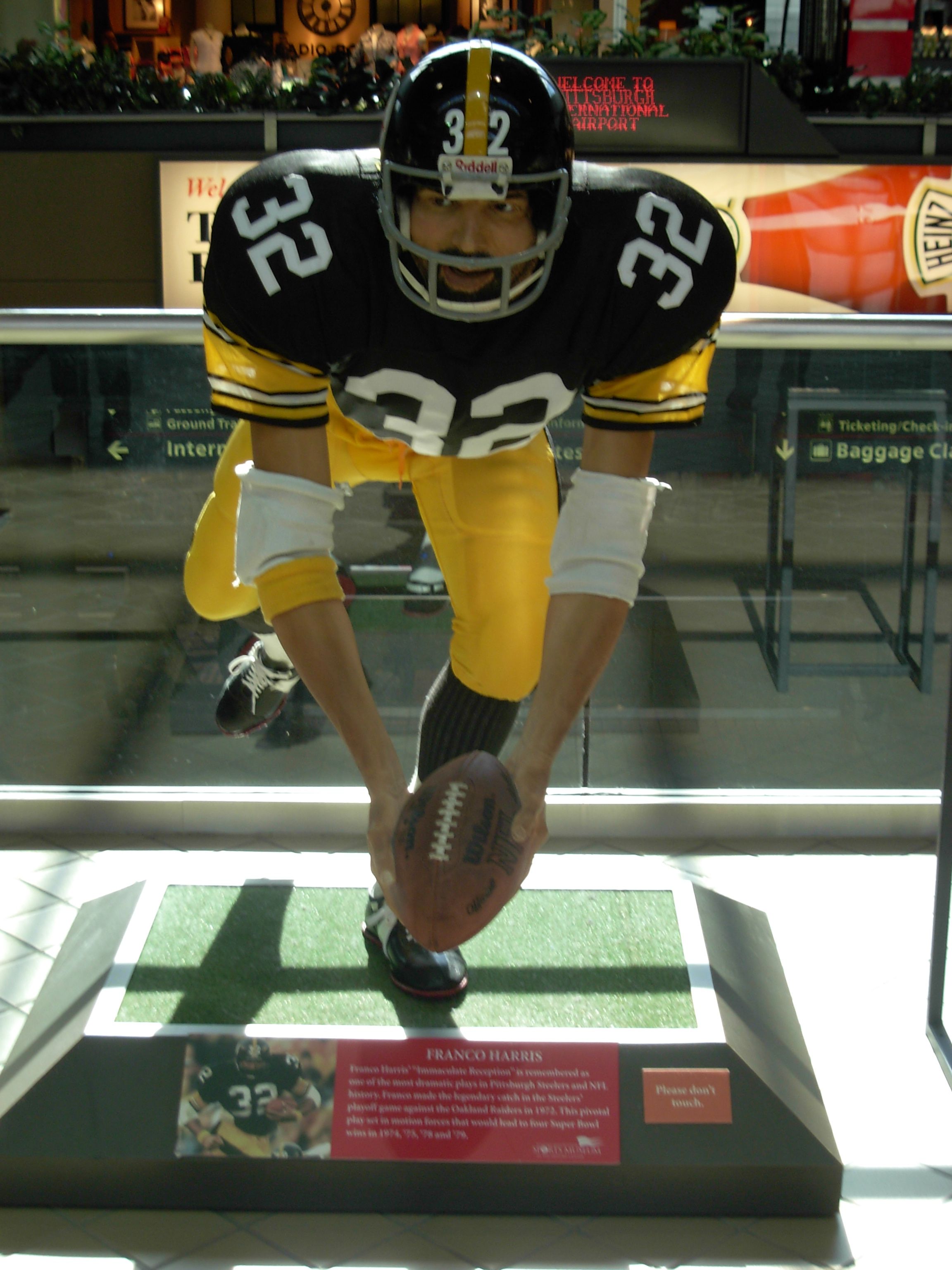 caption=Statue of Harris at the . The statue replicates the catch Harris made in what would become known as the .
position=
number=32, 34
birthdate=birth date and age|1950|3|7

Franco Harris (born March 7, 1950) is a former player best known for his career with the .

In the 1972 NFL draft he was chosen by the in the first round, the 13th selection overall. His selection by the team was considered controversial at the time, as many thought the team would select his Penn State teammate, Lydell Mitchell. (Mitchell was later selected by the Baltimore Colts in the draft.) He played his first 12 years in the NFL with the Steelers; his 13th and final year (1984) was spent with the . He was inducted into the in 1990.

Harris was born in . Harris went to in , and then attended Penn State University. While playing for the Penn State Nittany Lions, Harris served primarily as a blocker for the ' n .

In his first season with the Steelers (1972), Harris was named the league's rookie of the year by both "" and . In that season he gained 1,055 yards on 188 carries, with a 5.6 yards per carry average. He also rushed for 10 touchdowns and caught 3 touchdown passes. He was popular with Pittsburgh's large population: his fans dubbing themselves "Franco's Italian Army" and wore army helmets with his number on them.

Harris was chosen for 9 consecutive s from 1972 through 1980, and was All-Pro in 1977. He broke 's record by rushing for more than 1,000 yards in 8 seasons. The tandem running package of Harris and combined with a strong defense to win four s in the 1974, 1975, 1978, and 1979 seasons. In 1975 he was the of ; in that game he rushed for 158 yards and a touchdown on 34 carries for a 16-6 win over the . Harris was the first as well as the first to be named . Harris was a major contributor for the Steelers in all of their first four Super Bowl wins. His Super Bowl career totals of 101 carries for 354 yards are records and his 4 career rushing touchdowns are tied for the second most in Super Bowl history.

Critics complained about Harris' tendency to run out of bounds instead of taking on tacklers for extra yards. Harris felt that he extended his career by avoiding unnecessary contact. [ [http://archive.sportingnews.com/nfl/100/83.html TSN Presents - Football's 100 Greatest Players ] ]

In his 13 professional seasons, Harris gained 12,120 yards on 2,949 carries, a 4.1 yards per carry average, and scored 91 rushing touchdowns. He caught 307 passes for 2,287 yards (2091 m), a 7.4 average, and 9 touchdowns. While the Steelers no longer officially retire uniform numbers, they have not reissued his number 32 since he left the team, and it is generally understood that no Steeler will ever wear that number again.

Following the 1983 season, Harris and were both closing in on 's NFL rushing record, and had asked the for a pay raise. The Rooney family refused, and Harris threatened to hold out. The Steelers released Harris in training camp in 1984, which would start similar patterns years later with and both asking similar demands before leaving in . (Free agency, as it is seen today in the NFL, was not existent at the time of Harris's release.) Harris would sign with the during the 1984 season [ [http://www.boston.com/sports/football/articles/2006/02/03/franco_harris_ended_career_with_seahawks/ Franco Harris ended career with Seahawks - Boston.com ] ] and would play eight games with the team, earning a few hundred yards before retiring.

Harris was a key player in one of professional football's most famous plays, dubbed "The Immaculate Reception" by Pittsburgh sportscaster . In a 1972 playoff game, the were leading the Steelers 7-6 with 22 seconds to play when a pass was deflected away from intended receiver John "Frenchy" Fuqua right as defender arrived to tackle Fuqua. Harris snatched the ball just before it hit the ground and ran it in to win the game. The Raiders challenged the touchdown, claiming that Fuqua had handled the ball before Harris, which would invalidate the score because at that time it was against the rules for two offensive receivers to touch the ball. The Steelers maintained that the ball had touched Tatum instead. According to a recounting by the Pro Football Hall of Fame, the film of the play is inconclusive. [ [http://www.profootballhof.com/history/release.jsp?release_id=436 Divine intervention with 'Immaculate Reception' - Pro Football Hall of Fame ] ] (Later controversy stemming from Raiders linebacker 's assertion that Harris was only in position to catch the ball because he was lazy is widely discounted. Harris's original assignment on the play was to block, but he headed downfield when the Raiders forced Bradshaw out of the pocket, and can be clearly seen running before catching the deflected ball.)

In 2006, The , home of the , installed a life-size figure of Harris in the grand concourse of . The statue is a recreation of Harris' "."

Harris is the owner of Super Bakery, Inc. In 1996 Harris purchased the , the first black-owned business in the to offer public stock.

He is also a paid representative for the Harrah's/ casino plan for downtown Pittsburgh [ [http://ir.forestcity.net/phoenix.zhtml?c=88464&p=IROL-NRText&t=Regular&id=807149& Forest City Enterprises : Press Releases ] ] . This association has earned him the nickname "Franco Harrahs".