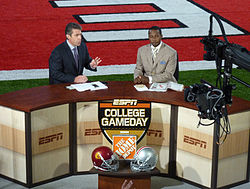 He played football for the University of Michigan from 1989–1991 and won the Heisman Trophy in 1991. He played professional football in the National Football League for the Washington Redskins (1992–1994), Jacksonville Jaguars (1995), Green Bay Packers (1996, 1999), Oakland Raiders (1997–1998) and Detroit Lions (1999–2002). Howard was voted the Most Valuable Player of Super Bowl XXXI and is the first and only special teams player to win the award. He is one of only four players to win both the Heisman Trophy and Super Bowl MVP; Roger Staubach, Jim Plunkett, and Marcus Allen are the others. Howard was ranked the 9th Greatest Return Specialist in NFL History by NFL Network's NFL Top 10 Return Aces. On July 16, 2011, Howard was inducted into the 2011 Class of the College Football Hall of Fame in South Bend, Indiana.[1][2]

Howard currently works for ESPN as a college football analyst.

Howard was born in Cleveland, and earned All-America and All-State honors as a tailback during his senior season at St. Joseph High School in Cleveland, Ohio, scoring 18 touchdowns and 10 interceptions on defense. He earned three varsity letters each in track and football, as well as one in basketball.

During his college career at the University of Michigan, Howard set or tied five NCAA and 12 Michigan records. He also led the Big Ten Conference in scoring with 138 points during the 1991 season on his way to winning the Heisman Trophy, Maxwell Award, Walter Camp Award, and earning first-team All-American honors. Howard captured 85% of the first place votes in balloting for the Heisman, the largest margin in the history of the trophy at that time. Howard also earned a Bachelor's degree in communications in 1992. He was inducted into the College Football Hall of Fame in 2011.

After college, Howard was selected by the Washington Redskins in the first round, fourth overall in the 1992 NFL Draft. The pick was considered a luxury for the Redskins, who had just won Super Bowl XXVI. In fact, the Redskins traded up to the number four spot (with Cincinnati), trading the sixth and twenty-eighth pick to move up.

Howard only played one season with the Jacksonville Jaguars in 1995. That season he had 26 receptions and one touchdown, with only 10 kick returns.

His most notable professional season was in 1996 when he was playing for the Green Bay Packers. He led the NFL in punt returns (58), punt return yards (875), punt return average (15.1), and punt return touchdowns (3), while also gaining 460 kickoff return yards and catching 13 passes for 95 yards. His 875 punt return yards were an NFL record, easily surpassing the old record of 692 yards set by Fulton Walker in 1985. During the 1996 NFL postseason, Howard contributed a punt return for a touchdown in a game between the Packers and the San Francisco 49ers. The Packers reached Super Bowl XXXI against the New England Patriots.

The Packers led 27-14 at halftime, but Patriots quarterback Drew Bledsoe led his team on a short drive that ended with Curtis Martin's 18-yard touchdown run to pull the Patriots within six late in the third quarter. With new life, the Patriots boomed the ensuing kickoff to the one-yard line, but Howard effectively shattered the Patriots' hopes for a comeback with a 99-yard kickoff return for a Packers touchdown. His return and the Packers' subsequent two-point conversion closed out the scoring of the game, and the Packers eventually won 35-21. Bill Parcells, the Patriots' head coach, commented after the game: "We had a lot of momentum, and our defense was playing better. But [Howard] made the big play. That return was the game right there. He's been great all year, and he was great again today." Howard totaled a Super Bowl record 90 punt return yards and 154 kickoff return yards with one touchdown; his 244 all-purpose yards also tied a Super Bowl record. His performance won him the Super Bowl MVP award, making Howard the only player to ever win the award based solely on a special teams performance.

Like Larry Brown in the previous year, Howard became a free agent after the season and used his status to collect a hefty contract from the Oakland Raiders. He led the NFL in kickoff returns (61) and kickoff return yards (1,381). Howard spent the 1998 football season with the Raiders before re-joining the Packers in 1999.

In the middle of the 2000 season, he was traded to the Detroit Lions, where he spent the rest of his career until his retirement after the 2002 season. In a special homecoming he scored a special teams touchdown in his Detroit Lions debut. In February 2001, he made his first and only Pro Bowl appearance as the NFC's kick returner.

Desmond Howard (left) on the set of ESPN's College GameDay in Austin, Texas.

Howard now works for ESPN as a college football analyst. He appears as an in-studio personality and, in 2005, began traveling with Chris Fowler, Lee Corso,and Kirk Herbstreit to marquee matchup sites during the season for the pre-game show ESPN College Gameday. He appears in College Gameday commercials where in one he sings "Texas Fight" with Texas head coach Mack Brown and puts his picture on the College Gameday bus with a Superman cape. On January 1, 2011 he appeared on the pre and post game show for the Rose Bowl on ESPN. He is also currently the color commentator for Detroit Lions pre-season games on the Detroit Lions Television Network. 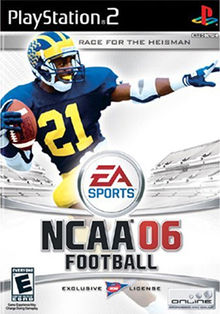 Howard on the cover of NCAA Football 06

On May 6, 2005, EA Sports announced that Howard would be the cover athlete for their latest installment in the NCAA Football video game series, NCAA Football 06. The announcement is a departure for the series, which has traditionally featured college athletes who went to the NFL the previous year on its covers. He was chosen to highlight the new feature "Race for the Heisman," and his cover picture showed him striking his famous Heisman pose while at Michigan. He struck this pose after a punt return for a touchdown during the 1991 Michigan–Ohio State game.

Howard was a guest star in the first season of Everybody Loves Raymond in the episode entitled "Fascinatin' Debra."