Christopher Duan Johnson (born September 23, 1985) is an American football running back for the Tennessee Titans of the National Football League. Johnson has become one of the league's premier players, and a Pro Bowl starter in his first three seasons.

Unheralded out of Orlando, Florida, Johnson emerged as a senior at East Carolina where he broke out for 2,960 all-purpose yards and 24 touchdowns. He was drafted by the Titans 24th overall in 2008, after running a record-tying 4.24 sec in the 40-yard dash at the NFL Combine. In his second year of professional football, he won the NFL rushing title with 2,006 yards (only the sixth player ever to break 2,000), and broke Marshall Faulk's record of total yards from scrimmage with 2,509.[1] He was named the NFL's Offensive Player of the Year in 2009.

Johnson played high school football at Olympia High School in Orlando until breaking his leg his senior year. Johnson was also a track star at Olympia High. In his senior year, he finished second in the 100 metres at the 2004 Florida 4A state championships behind 2008 Olympic bronze medalist Walter Dix.[2] In addition, Johnson also finished his senior season posting personal bests of 10.50 (the nation's 10th fastest in 2004)[3] and 21.30 (the nation's 24th fastest in 2004) in the 100 metres and 200 metres respectively. His junior year he qualified for the finals of the Florida State meet with a preliminary time of 10.83. Walter Dix won the event with a 10.46 in the finals, Johnson placed 4th with a time of 10.66.

Considered only a two-star recruit by Rivals.com, Johnson was not ranked among the nation's top running back prospects in 2004.[4] He selected East Carolina over Eastern Kentucky and UConn.

After his memorable freshman season, Johnson started all 11 games at tailback in his sophomore season. He led the team with 684 yards on 176 carries and six touchdowns, while also recording 35 receptions for 356 yards and two scores and 459 kickoff return yards. He was also the team leader with 1,499 all-purpose yards and set a school record with 67 career receptions as a running back. Against the West Virginia Mountaineers, Johnson rushed for 92 yards on 22 carries, both team highs. In the Southern Mississippi game, Johnson returned four kickoffs for 100 yards. The Rice victory, Johnson totaled 129 receiving yards, including an 81-yard touchdown reception. His 100-yard receiving game teamed-up with Aundrae Allison's 109 yards marked the first dual 100-yard receiving game since 1999 for the Pirates. In the Tulsa game, Johnson did not record a reception which ended his consecutive streak at 18 games. However, in the following game against Marshall, Johnson carried the ball 18 times for 106 yards and a career-high 3 touchdowns.

After missing spring practice due to neck surgery, Johnson returned in his junior season with 972 all-purpose yards. In the down season, Johnson totaled 314 rushing yards, 176 receiving yards, and 482 kickoff return yards. He played in 12 games on the season but only made 5 starts. He was selected to the All-Conference USA first-team as a return specialist after the season. He also broke the school career record for receiving yards as a running back with 768 yards, but only had one 100-yard rushing game on the year and only had four rushing scores. In the season opener, against Navy, Johnson only recorded 54 all-purpose yards with one rushing touchdown. In the UAB game, Johnson had 112 all-purpose yards. In the Memphis game, Johnson recorded his only 100-yard rushing game with 106 yards on 22 carries for two touchdowns. He finished the game with 180 all-purpose yards. Johnson had a foot injury that limited his action in the West Virginia game, and caused him to miss the Virginia game. In the SMU game, Johnson returned a kickoff for a career-long 51 yards. Then, in the Southern Miss game, Johnson recorded 136 all-purpose yards that included a 96 yard kickoff return for a touchdown, his second career return touchdown. The return also made national recognition on ESPN's top plays. Against Rice, Johnson carried the ball 12 times for 83 yards. 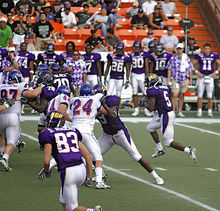 Johnson rushing the ball on a play during the 2007 Hawaii Bowl.

In Johnson's final collegiate game, the 2007 Hawai'i Bowl against Boise State, Johnson rushed for 223 yards on 28 carries and a touchdown as the Pirates won, 41–38. Johnson also had three receptions for 32 yards and a score and had six kick returns for 153 yards for a career-high and NCAA FBS record of 408 all-purpose yards and two scores.

Prior to the NFL Scouting Combine, Johnson was projected a second to third round draft pick in the 2008 NFL Draft.[5] However, at the combine he registered a 4.24-second time and tied the all-time mark set by Rondel Melendez, a wide receiver from Eastern Kentucky, in 1999—the first year the combine used electronic timers.[6] Johnson was also fifth highest among running backs in the vertical jump with a 35-inch jump. His 10-foot, 10-inch broad jump was third best among the running backs.[7]

Johnson was drafted by the Tennessee Titans in the first round (24th overall) of the 2008 NFL Draft He wore the number twenty nine until the next season. He was the highest East Carolina player selected in the NFL Draft since Robert Jones went 24th overall in the 1992 NFL Draft.

He had his professional debut with the Tennessee Titans on September 7, 2008 where he played in the season opener against the Jacksonville Jaguars, which the Titans won 17-10. Johnson rushed for 93 yards on 15 carries and had 3 receptions for 34 yards and a touchdown. In only his second career game, Johnson ran for 109 yards on 19 carries, including a 51 yard run, and 2 receptions for 12 yards.

On September 28, Johnson rushed for the first touchdown of his career against the Minnesota Vikings. Johnson finished the game with 75 all-purpose yards (61 rushing, 14 receiving) and 2 TD's. In only his 6th NFL Game Johnson rushed for 168 yards and a touchdown on only 18 carries against the Kansas City Chiefs on October 19, 2008. Chris Johnson finished the season with 1,228 yards on 251 carries for a 4.9 ypc and 43 receptions for 260 yards and 10 total TDs in 15 games. He led all rookies in rushing yards per game with 81.9 ypg.

Johnson finished second in AP rookie of the year voting to Matt Ryan and was elected to the 2009 Pro Bowl.

Johnson split carries with RB LenDale White for the duration of the 2008 season. White finished the 2008 season with 773 yards on 200 carries for a 3.9 ypc and 15 rushing touchdowns. They nicknamed this RB tandem "Smash and Dash." Smash referred to White due to his power, and Dash referred to Johnson due to his unusual quickness and speed. Entering into the 2009 season, however, Johnson dismissed the nickname of "Smash and Dash" and named himself "Every Coach's Dream."

Some consider the 2009 season of Chris Johnson to be one of the best ever in NFL history for a Running Back.[11] He rushed for 2,006 yards[12] to become one of only six players in NFL history to be in the 2000 rushing yards club. He averaged 5.6 yards per carry and 125.4 yards per game to lead the league.[13] He had 2,509 total yards from scrimmage, breaking Marshall Faulk's single-season record. He was named the NFL's Offensive Player of the Year in 2009. After his 2009 season, the media referred to him as "CJ2K".

To start the 2010 NFL Season the Tennessee Titans took on the Oakland Raiders at LP Field. Chris Johnson scored on a 76 yard TD run in the second quarter and again on a 4 yard run in the third. Johnson had a slow start to the game but ended it with 142 yards on 27 carries with a yard per carry average of 5.3 yards. The next week the Titans took on the Pittsburgh Steelers. The Steelers ended Johnson's streak of 100 yard games and limited him to only 34 yards. He did have an 85 yard touchdown run but it was called back on a holding penalty. The Titans then took on the New York Giants. Johnson had 124 yards on 34 carries. He would next have yet another 100 yard game against the Dallas Cowboys gaining 131 yards on 19 carries along with two touchdowns one of which ended up being the game winner with 3:28 left. After dreadful performances against the Houston Texans and Jacksonville Jaguars, Johnson bounced back to rush for 110 yard and 1 TD against the Colts. On January 14, 2011, Johnson was selected to the 2011 Pro Bowl, his third in three years.

During the summer training camp prior to the 2011 season, Johnson initially did not show up to camp, pending contract negotiations. Johnson felt he was due a considerably larger sum of money. As the leading rusher since 2008 (4,598 yards) he was set to make $1.065 million in 2011, under existing contract terms (approximately 10% of the money paid to the second place rusher for the same period).[14] On September 1, Johnson became the highest paid running back, agreeing to a four-year, $53.5 million contract extension, including $30 million guaranteed, with the Titans, ending his holdout.[15]

In early November a report surfaced making light of the possibility that Johnson could be released by the Titans prior to the fifth day of the 2012 league year, which begins every March.[16] At the time of the report, Johnson was having the worst season his career with just 302 rushing yards and one touchdown on 107 carries through the season's first seven games. Johnson's contract calls for an $8 million salary in 2012 that becomes guaranteed in March; he also will receive a guaranteed salary of $9 million once the fifth day of the 2013 league year passes. Should the Titans release Johnson prior the March 2012 deadline they would save $17 million and Johnson would thus become a free agent.

Chris Johnson and his best friend Kenny Turner started a record label called Flashy Lifestyle Entertainment.[17] Chris Johnson said the following statement about the label, "Actually, we [Kenny Turner] grew up together, that’s my best friend. The label has actually been out close to a year, but at first it was called Fast Money Ent, so I like I said, we switched it over too Flashy Lifestyle Ent." [18] Chris Johnson released a song on his twitter called "Act on Deck" for his fans during the 2011 offseason.[19] Josh Katzowitz from CBS Sports gave the following statement about the song, "To me, it sounds a little like Ludacris, but admittedly, I have no idea what I’m talking about. It also sounds like the track is incomplete, considering it just kind of fades out, but maybe that’s the point." [20]

"Flashy Lifestyle Entertainment is a hip-hop label that I started with Kenny Turner," Johnson told publicists Jonathan Hay and Justin Melo for SOHH. "We have four different solo artists and one group on the label that all go hard. The solo artists go by the names of Pressure Dommer, Lil EZ, Ballie and Stakkhouse." [21] Chris Johnson also added the following statement to SOHH, "Music is always something I wanted to somehow be a part of," he added "I always wanted to be a rapper or be involved with the rap industry in some sort of fashion. Flashy Lifestyle and the artists that we have -- have given me the opportunity to finally do that."[21]