The Dutch–Portuguese War was an armed conflict involving Dutch forces, in the form of the Dutch East India Company and the Dutch West India Company, against the Portuguese Empire. Beginning in 1602, the conflict primarily involved the Dutch companies invading Portuguese colonies in the Americas, Africa, India and the Far East. The war can be thought of as an extension of the Eighty Years War and Thirty Years' War being fought in Europe at the time between Spain and the Netherlands, as Portugal was in a dynastic union with the Spanish Crown, after the 1580 Portuguese succession crisis, for most of the conflict. However, the conflict had little to do with the war in Europe and served mainly as a way for the Dutch to gain an overseas empire and control trade at the cost of the Portuguese. English forces also assisted the Dutch at certain points in the war.

The result of the war was that although Portugal won in South America and Africa, the Dutch were clearly the victors in the Far East and South Asia. English ambitions also greatly benefited from the long standing war between its two main rivals in the Far East.

This war occurred mostly throughout the end of the 16th and beginning of the 17th centuries. It opposed primarily the polity of Portugal and that of the Netherlands.

Portugal was throughout most of the initial period under Spanish Habsburg rule (following the 1580 Iberian Union) and Spain was battling the Dutch in Flanders and trying to eliminate their rebellion otherwise known as the Eighty Years War. Spain also cut off the Netherlands from the spice and other markets of Lisbon, making it necessary for the Dutch to send their own expeditions to the sources of these commodities and to take control of the Indies spice trade.

In 1592, during the war with Spain, an English fleet had captured a large Portuguese carrack off the Azores, the Madre de Deus. Loaded with 900 tons of merchandise from India and China, estimated at half a million pounds (nearly half the size of English Treasury at the time).[1] This foretaste of the riches of the East galvanised interest in the region.[2] That same year, Cornelis de Houtman was sent by Dutch merchants to Lisbon, to gather as much information as he could about the Spice Islands. In 1595, merchant and explorer Jan Huyghen van Linschoten, having travelled widely in the Indian Ocean at the service of the Portuguese, published a travel report in Amsterdam, the "Reys-gheschrift vande navigatien der Portugaloysers in Orienten" ("Report of a journey through the navigations of the Portuguese in the East").[3] This included vast directions on how to navigate between Portugal and the East Indies and to Japan. Dutch and British interest fed on new information led to a movement of commercial expansion, and the foundation of the English East India Company, in 1600, and Dutch East India Company(VOC), in 1602, allowing the entry of chartered companies in the so-called East Indies.

In 1602 the Verenigde Oost-Indische Compagnie (Dutch East India Company or VOC) was founded, with the goal of sharing the costs of the exploration of the East Indies and ultimately re-establishing the spice trade, a vital source of income to the new Republic of the Seven United Provinces.

The Republic was at the time fighting the Habsburgs for their independence and the reason why the Dutch sought to control the spice trade was one of economic survival. Prior to the union of the Portuguese and Spanish Crowns (respective territories depicted), Portuguese merchants used the Low Countries as a base for the sale of their spices in northern Europe. After the Spaniards wrested control over the Portuguese Empire though, they declared an embargo on all trade with the rebellious provinces (see: Union of Utrecht).

This meant the trade would now be directed through the southern low countries (roughly present-day Belgium), which according to the Union of Arras or (Union of Atrecht) were pledged to the Spanish monarch and were Roman Catholic, as opposed to the Dutch Protestant north. This also meant that the Dutch had lost their most profitable trade partner and their most important source of financing the war against Spain. Additionally they would lose their distribution monopoly with France, the Holy Roman Empire and northern Europe. Their North Sea fishing and Baltic cereal trading activities would simply not suffice to maintain the republic. 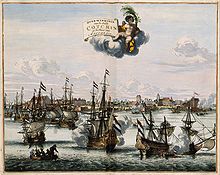 The Dutch were hopeful of some success, since in 1588 the English, with Dutch aid, had defeated the Spanish Armada. Naval power, essential to the Dutch economy and independence, was made a high priority.

At dawn of February 25, 1603 three ships of the Dutch East India Company (V.O.C) seized the Santa Catarina, a Portuguese carrack. It was such a rich prize that its sale proceeds doubled the capital of the V.O.C. The legality of keeping the prize was questionable under Dutch statute and the Portuguese demanded the return of their cargo. The scandal led to a public judicial hearing and a wider campaign to sway public (and international) opinion. As a result Hugo Grotius in The Free Sea (Mare Liberum, published 1609) formulated the new principle that the sea was international territory, against the Portuguese Mare clausum policy, and all nations were free to use it for seafaring trade. The 'free seas', provided suitable ideological justification for the Dutch breaking up trade monopolies through its formidable naval power.

The first expeditions succeeded in bypassing Portuguese dominion of the Cape of Good Hope and the Indian Ocean in general.

The Dutch also managed to break the Portuguese monopoly of the spice trade. As the Dutch fleets grew in size, so did their interference with Portuguese trade, and the first skirmishes took place.

By 1619, the Dutch conquered Jayakarta - which they renamed to Batavia and made it their capital in the East Indies. For the next twenty years, the two cities of Goa and Batavia fought each other relentlessly, since they stood as the capital of the Portuguese India State (or the Indian Vice-Royalty) and the Dutch East India Company's base of operations.

In fact, Goa had been under intermittent blockade since 1603. Most of the fighting took place in west India, where the Dutch Malabar campaign sought to impose yet another monopoly on the spice trade. Dutch and Portuguese fleets faced off for control of the sea lanes, while on mainland India the war involved more and more Indian kingdoms and principalities as the Dutch capitalised on local resentment of Portuguese conquests in the early 16th century.

In all, and also because the Dutch were kept busy with their expansion in Indonesia, the conquests made at the expense of the Portuguese were modest: some Indonesian possessions and a few cities and fortresses in the Arabian sea. The most important blow to the Portuguese east empire and the culmination of the war would be the conquest of Malacca in 1641 (depriving them of the control over these straits), Ceylon in 1658, and the Malabar coast in 1663, even after the signing of the peace Treaty of The Hague (1661).

However, important sideshow battles also took place in the South China sea with initially combined fleets of Dutch and English vessels, and subsequently exclusively Dutch ships assaulting Macau. The attempts to capture Macau failed, but the Dutch were ultimately successful in acquiring the monopoly of trade with Japan, and the English eventually decided to simply build their own tradepost in China around the Pearl River delta, which they would call Hong Kong.

Sugar War - Government-General Vs. the WIC 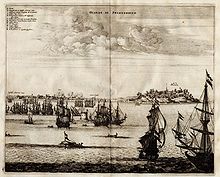 Surprised by such easy gains in the East, the Republic quickly decided to exploit Portugal's weakness in the Americas. In 1621 the Geoctroyeerde Westindische Compagnie (Authorised West India Company or WIC) was created to take control of the sugar trade and colonise America (the New Netherland project). The Dutch West India Company would, however, not be as successful as its eastern counterpart.

The Company benefited from a large investment in capital, drawing on the enthusiasm of the best financiers and capitalists of the Republic, such as Isaac de Pinto, by origin a Portuguese Jew.

The invasion began with a series of temporary conquests by the Dutch of some principal ports in Portuguese Brazil such as the capital Salvador and Olinda. The whole Brazilian northeast was occupied and Recife was renamed Mauritsstad. The Dutch were opposed by the general government's efforts to expel them, directed from Salvador, Olinda and the countryside.

At the same time small incursions were organised against the Portuguese African possessions in order to take control of the slave trade and complete the trade triangle that would ensure the economic prosperity of the Netherlands. Elmina and other Portuguese Gold Coast trade posts were taken and Luanda was put to siege.

In a remarkably short time the situation looked all but lost to the Portuguese with strategic ports and areas under Dutch control. With links to Portugal cut off and Dutch forces and colonisers growing in strength the resistance to Dutch rule was bound for eventual collapse. The turning point in the war occurred with the arrival of a powerful Iberian force on April 30, 1625, under the command of the Spanish Admiral Fadrique de Toledo. The fleet consisted of 34 Spanish ships, 22 Portuguese ships and 12,500 men (three quarters were Spanish and the rest Portuguese). Its reconquest of the strategically important city of Salvador da Bahia would prove strategically important in sustaining the Portuguese campaigns to oust the Dutch from Brazil over the next two decades. Nevertheless the greatest period of Dutch colonial activity in Brazil came after this date.

"Map of the Portuguese liberation of the city of Salvador in Brazil in 1631", João Teixeira Albernaz, o Velho, 1631

In response to these Dutch invasions the Portuguese settlers imposed a war of attrition on the ground forces of the West India Company. The West India Company became overstretched, and its fleets could not effectively carry out a blockade of Portuguese ports. The arrival of reinforcements from Portugal ensured the defeat of the Dutch and their expulsion from Brazil.

In 1640 the Portuguese took advantage of the Catalan Revolt and themselves revolted from the Spanish-dominated Iberian Union. From this point onwards the English decided instead to re-establish their alliance with Portugal.

The Dutch, determined to recover or retain their territories, postponed the end of the conflict. But as they had to contend with the English at the same time they eventually decided to offer terms.

The Spanish were actually aware that the growing strength of the Dutch was due in part to their expanding international trade, much of which was at Portuguese expense. Dutch aggression upon Portuguese interests was not viewed with equanimity by Spanish as evidenced by the intervention in Brazil. To this end the Spanish efforts to intercept Dutch ships by a fleet of Dunkirkers, based in the Spanish Netherlands, was also related to this overseas war. The Spanish also clashed with the Dutch over the Spice Islands trade after seizing a trading fort on Ternate that had been lost by the Portuguese, and establishing forts on Tidore. However, they were fully stretched themselves, having to cope with Dutch and French attacks upon their own shipping and colonies and the Barbary pirates and Ottomans in the Mediterranean.