El Jadida (Berber: ⵎⴰⵣⵖⴰⵏ Mazghan, Arabic:الجديدة "new") is a port city on the Atlantic coast of Morocco, in the province of El Jadida. It has a population of 144,440 (2004 census). From the sea, El Jadida's old city; has a very "un-Moorish" appearance; it has massive Portuguese walls of hewn stone.[1]

El Jadida, previously known as Mazagan (Portuguese: Mazagão), was seized in 1502 by the Portuguese, and they controlled this city until 1769, when they abandoned Mazagão. Its inhabitants were evacuated to Brazil, where they founded new settlement Nova Mazagão (now in Amapá). El Jadida was then taken over by Sultan Mohammed ben Abdallah. 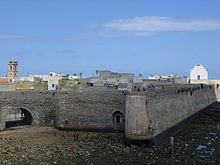 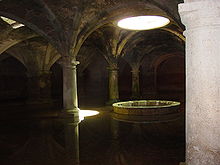 The Portuguese Fortified City of Mazagan was registered as a UNESCO World Heritage Site in 2004, on the basis of its status as an "outstanding example of the interchange of influences between European and Moroccan cultures" and as an "early example of the realisation of the Renaissance ideals integrated with Portuguese construction technology".

According to UNESCO,[2] the most important buildings from the Portuguese period are the cistern, and the Manueline Church of the Assumption.

At present, the city's main exports are beans, almonds, maize, chickpeas, wool, hides, wax and eggs. It imports cotton, sugar, tea and rice. The presence of nearby ports and factories is responsible for the pollution of El Jadida's beaches.

The modern city of Essaouira (containing some of the earliest recorded Phoenician settlement history of Morocco: the archaeological ruins of Mogador[3]) connects to El Jadida from the south via the R301 road.