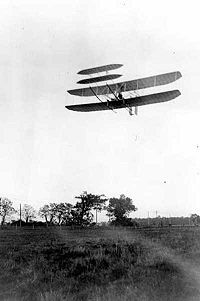 The Wright Flyer III, now in Carillon Historical Park, shown being flown by Orville Wright on October 4, 1905, over Huffman Prairie near Dayton

Through the invention of powered flight, Wilbur and Orville made significant contributions to human history. In their Dayton, Ohio, bicycle shops, these two men, self-trained in the science and art of aviation, researched and built the world's first power-driven, heavier-than-air machine capable of free, controlled, and sustained flight. The Wrights also perfected their invention during 1904 and 1905 at the Huffman Prairie Flying Field near their hometown of Dayton.

Paul Laurence Dunbar achieved national and international acclaim in a literary world that was almost exclusively reserved for whites, producing a body of work that included novels, plays, short stories, lyrics, and over 400 published poems. His work, which reflected much of the African American experience in the United States, contributed to a growing social consciousness and cultural identity for African Americans. Although he died in 1906, his writings contributed to later developments in African American history, such as the Harlem Renaissance and the early Civil Rights movement. He was a neighbor and lifelong friend of Wilbur and Orville Wright. 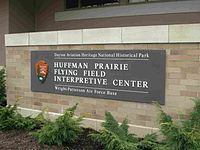 The park is a cooperative effort between the National Park Service and several partners. The sites are:

Dayton Aviation Heritage National Historical Park is located within the National Aviation Heritage Area, an eight-county region in Ohio established as a National Heritage Area by Congress in 2004. The U.S. Department of the Interior listed three units of the park (Huffman Prairie Flying Field, Wright Hall and the 1905 Wright Flyer, and the Wright Cycle Company and Wright and Wright Printing building) on the 2008 U.S. World Heritage Tentative List as part of the Dayton Aviation Sites listing.