Monosaccharide nomenclature is a set of conventions used in chemistry to name the compounds known as monosaccharides or "simple sugars" — the basic structural units of carbohydrates, which cannot be hydrolysed into simpler units.[1]

The elementary formula of a simple monosaccharide is CnH2nOn, where the integer n is at least 3 and rarely greater than 7. Simple monosaccharides may be named generically according on the number of carbon atoms n: trioses, tetroses, pentoses, hexoses, etc.

Every simple monosaccharide has an acyclic (open chain) form, which can be written as H-(CH(OH))x-(C=O)-(CH(OH))y-H; that is, a straight chain of carbon atoms, one of which is a carbonyl group, all the others bearing an hydrogen -H and a hydroxyl -OH each, with one extra hydrogen at either end. The carbons of the chain are conventionally numbered from 1 to n, starting from the end which is closest to the carbonyl.

Two isomers whose molecules are mirror-images of each other are identified by prefixes 'D-' or 'L-', according to the handedness of the chiral carbon atom that is farthest from the carbonyl. In the Fischer projection, that is the second carbon from the bottom; the prefix is 'D-' or 'L-' according to whether the hydroxyl on that carbon lies to the right or left of the backbone, respectively.

If the molecular graph is symmetrical (H(CHOH)x(CO)(CHOH)xH) and the two halves are mirror images of each other, then the molecule is identical to its mirror image, and there is no 'L-' form.

A distinct common name, such as "glucose" or "ribose", is traditionally assigned to each pair of mirror-image stereoisomers, and to each achiral stereoisomer. These names have standard three-letter abbreviations, such as 'Glu' for glucose and 'Rib' for ribose.

Another nomenclature uses the systematic name of the molecular graph, a 'D-' or 'L-' prefix to indicate the position of the last chiral hydroxyl on the Fischer diagram (as above), and another italic prefix to indicate the positions of the remaining hydroxyls relative to the first one, read from bottom to top in the diagram, skipping the keto group if any. These prefixes are attached to the systematic name of the molecular graph. So for example, D-glucose is D-gluco-hexose, D-ribose is D-ribo-pentose, and D-psicose is D-ribo-hexulose. Note that, in this nomenclature, mirror-image isomers differ only in the 'D'/'L' prefix, even though all their hydroxyls are reversed. 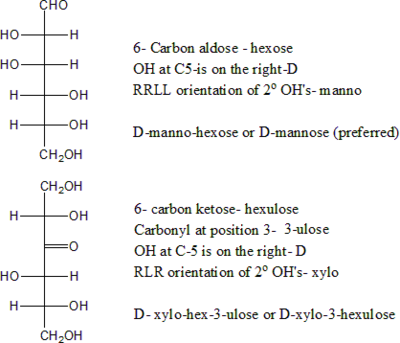 The following tables shows the Fischer projections of selected monosaccharides (in open-chain form), with their conventional names. The table shows all aldoses with 3 to 6 carbon atoms, and a few ketoses. For chiral molecules, only the 'D-' form (with the next-to-last hydroxyl on the right side) is shown; the corresponding forms have mirror-image structures. Some of these monosaccharides are only synthetically prepared in the laboratory and not found in nature.