Post Office Ltd (Welsh: Swyddfa'r Post Cyf.; Scottish Gaelic: Oifis a' Phuist[1]) is a retail post office company in the United Kingdom that provides a wide range of products including postage stamps and banking to the public through its nationwide network of post office branches.

There are currently around 12,000 Post Office branches across the UK, of which 373 are directly managed by Post Office Ltd. (known as Crown Offices). The majority of other branches are either run by multiple franchise partners or local subpostmaster agents. 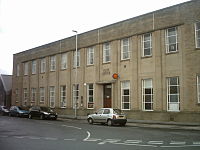 The Post Office provides information on services and accepts postal items and payment on behalf of the two collection and delivery divisions of the Royal Mail group, Royal Mail and Parcelforce. These include a variety of ordinary and guaranteed services both for delivery within the United Kingdom and to international destinations. Postage stamps (including commemorative stamps and other philatelic items), airletters and international reply coupons are sold, while applications for redirection of mail are accepted on behalf of Royal Mail.

Post Office Local Collect is a scheme whereby undelivered mail can be redirected at customer request to a post office for convenient collection. Poste restante mail can also be held for collection by people travelling. 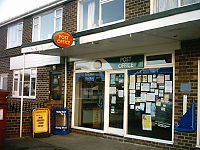 Personal banking services are offered on behalf of a number of "partner banks" that the Post Office has agreements with. Although different services are available on behalf of different institutions, these may include cash withdrawals, paying in cash and cheques, balance enquiries and cheque encashment. Some post offices also have cash machines, mainly provided by Bank of Ireland.

The Post Office Card Account is a basic bank account allowing customers to collect benefit payments. Most other basic accounts can also be accessed through post offices. The Card Account cannot be accessed anywhere other than a Post Office Counter or ATM at a Post Office. These accounts are limited to Department of Work & Pensions deposits of benefit payments and HMTC Tax Credits/Child Benefit. Housing Benefit from the local Council for example, must be paid elsewhere. If the account remains dormant for one year, it is closed. These bank accounts are run by J.P. Morgan Europe Ltd on behalf of the Post Office. To open an account, you must be in receipt of benefits and a referral is made via the Jobcentre Plus.

The Post Office has long been an agent for National Savings and Investments, which was originally the Post Office Savings Bank but is now a wholly separate institution. Information is available for most NS&I products, including Premium Bonds, and numerous transactions can be carried out in post offices.

In recent years the Post Office has launched its own range of branded savings products, which are sometimes in competition with those offered by NS&I. The most recently introduced, in September 2008, is a Post Office ISA.[3] Also on offer is an instant access account (Instant Saver), while issues of two fixed term investments (Five Year Saver and Growth Bond) are periodically available. The Post Office are also a provider for the Child Trust Fund.

The Post Office operates as a provider of a home landline telephone service (branded as Post Office HomePhone) and has recently added broadband internet to its portfolio.

The Post Office is now seeking to establish itself as a financial service provider and provides a number of branded insurance products including for cars, vans and motorbikes; home insurance (buildings and/or contents); pet insurance and travel insurance. Life insurance, over 50s life cover and lifestyle protection insurance are also available.

The Post Office is now offering itself as a mortgage lender and also offers personal loans, although the latter are now marketed purely through the company's website and not through the branch network.

A number of bill payments can be accepted on behalf of a variety of organisations including utilities, local authorities and others. These can be in the form of automated payments (barcoded bills, swipe cards, key charging) or manual transactions through the Alliance & Leicester Transcash system.[4] The name Transcash was formerly used by Girobank. The Transcash service is not advertised and a search for "Transcash" on the Post Office website returns no results. However, Transcash forms (still marked "Girobank") were still available at Post Office counters in October 2010.

Check and send services are available for applications made to several government institutions, including the IPS (for British passport applications), DVLA (for driving licences and the Department of Health (for the European Health Insurance Card). Fishing licences are issued on behalf of the Environment Agency from branches in England and Wales. Selected branches issue international driving permits.

Post Office savings stamps were first introduced by Henry Fawcett in the 1880s but was phased out in the 1960s. These were re-introduced in August 2004 because of consumer demand. In 2010 saving stamps were withdrawn and replaced by the Budget Card. In 2011 it was announced that Post Office saving stamps would have to be redeemed by 28th February 2011, although any customers who miss the deadline can post their saving stamps to a central Post Office location where the stamps will be validated. A payout letter will be sent to the customer that can be exchanged for cash at their local branch (ID required).

In towns, Post Offices are usually open from around 09:00 to 17:30 from Monday to Friday and from 09:00 to 12:30 on Saturday. In some country areas, opening hours are much shorter - perhaps only four hours per week[citation needed]. In some villages an outreach service is provided, this can be in a van, village hall, village shop etc. Most Post Offices are shut on Sundays and Bank Holidays.

Post Office Ltd. has in recent years announced losses; a reported £102 million in 2006. This has raised many concerns in the media regarding The Post Office's ability as a company to operate efficiently.[5] Plans to cut the £150m-a-year subsidy for rural post offices led to the announcement that 2500 local Post Offices were to be closed. This announcement resulted in a backlash from local communities that rely on the service.

In 2007, The government gave a £1.7 billion subsidy to Royal Mail Group so that it could turn a profit by 2011. This was to be used to invest across the whole network, which is made up of Royal Mail, Post Office Ltd and Parcelforce.

85 Crown Post Offices were closed, 70 of which were sold to W H Smith. This followed a trial of six Post Office Outlets in W H Smith stores. W H Smith was expected to make up to £2.5 million extra in annual profit.

Under the Postal Services Act 2011, post offices may be sold off to become mutuals.

Six post office branches are not open to the public:[7]