Veolia Transport (formerly Connex) is the international transport services division of the French-based multinational company Veolia Environnement. Veolia Transport trades under the brand names of Veolia Transportation in North America and Israel), Veolia Transport, Veolia Verkehr in Germany and with the former name Connex preserved in Lebanon and Jersey.

Veolia has diverse road and rail operations across the globe, employing 72,000 workers worldwide and serving completely or partly about 40 metropolitan areas with more than 1,000,000 inhabitants, including:

The rail freight branch of the organisation Veolia Cargo was sold in 2009 to SNCF and Eurotunnel.[2]

On July 23, 2009, the merger between Veolia Transport and Transdev was announced.[3] In March 2011 the holdings merged into Veolia Transdev.[4]

Veolia Transport is one of the largest bus operators, operates also one regional railway line and one trolleybus network. Main acquisitions carried out (as Connex) in 2002–2004 (ČSAD Ostrava, Třinec, Praha-Vršovice, Příbram, DP Teplice), smaller in 2005 (MAD Kolín), 2008 (Nerabus), 2010 (Spojbus) etc. In summer 2008, it changed its trademark from Connex to Veolia Transport. In 2004–2007, several times competed or offered for passenger railway transport, however have got no new job yet.

A Veolia bus in Helsinki advertising the Hesburger fast-food chain 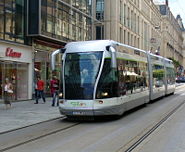 Tramway on tires in Nancy, Meurthe-et-Moselle 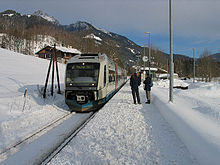 The Bayerische Oberlandbahn near Munich is operated by Veolia. 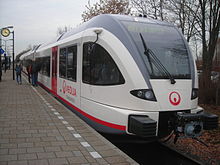 Despite the merger with Transdev, the former Veolia operations are to be disposed of, with all but one of the South Wales depots due to close before July 2011. Notification has been made with the regulator VOSA for the deregistration of most South Wales services. As of May 2011 there is no news regarding the future ownership of the remaining English Midlands and North East Veolia operations.

In April 2005 Veolia were awarded the contract in York Region in suburban Toronto, Ontario, Canada running the bus rapid transit (BRT) naming the routes VIVA and joining with York Region Transit (YRT) as a one fare transit system.[14]

Veolia arrived in the United States in 2001, with the acquisition of Yellow Transportation in Baltimore, Maryland. On September 1, 2005, Veolia (then "Connex") acquired ATC, making Connex-ATC the largest privately owned public transportation company in North America. In 2006, Connex-ATC changed its name to Veolia Transportation, acquired ShuttlePort, and won several contracts in the USA, including:

Veolia now employs over 16,000 employees with 6,500 vehicles and a revenue of over $1 billion. in 2005 in North America. Its executive team includes Mark Joseph (CEO of VTNA). It is headquartered in Oak Brook, Illinois. 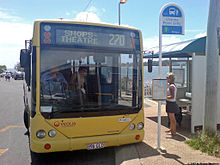 A Veolia Bus in Brisbane, Australia. 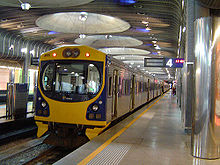 In Israel, Veolia has been contracted, among other contractors, to develop and operate a light rail line [2] running from Mt. Herzl in the South Western section of Jerusalem to the North of the city, where neighborhoods that their annexation by Israel is contested by some are located. In November 2006, ASN, a Dutch bank, broke off financial relations with Veolia on account of the light rail contract.

According to Al-Jazeera "Lawyers for Palestinian Human Rights (LPHR) has overseen significant research that makes a strong legal case for local authorities to exclude Veolia Environmental Services from bidding for local authority contracts. This will enable campaigners to challenge UK local authorities which hold a contract with, or invite, Veolia to tender for a contract. If no satisfactory response is given, legal action could be the next move."[20]

It should be noted that since the light rail is set to provide service also to the residents of Arab neighborhoods of East and North East Jerusalem (Shuafat, Bab a-Zahara and Beit Hanina), as seen in the light rail route map [3], the allegations are disputable, especially considering the reaction to the alternative in which these neighborhoods would not have been included in the route plan.