Dirschau (help·info)) is a town on the Vistula River in Eastern Pomerania, Kociewie, northern Poland with 60,279 inhabitants (June 2009). It is an important railway junction with a classification yard dating to the Prussian Eastern Railway (German: Preußische Ostbahn). The city is known for its attractive old town and the Vistula Bridge, or Bridge of Tczew, damaged during World War II.

It is the capital of Tczew County in Pomeranian Voivodeship since 1999, and was previously a town in Gdańsk Voivodeship (1975–1998).

Tczew was first mentioned as Trsow in a document by Duke Grzymisław bestowing the land to the Knights Hospitaller in 1198. In some documents, the name Derszewo appears, which stems from the name of a feudal lord, Dersław. It is unknown whether Trsow and Derszewo referred to the same or two neighboring settlements. By 1252 the settlement was known by the names Tczew and Dirschau, and in 1258 Tczew hosted the first city council in Poland. It received Lübeck rights from Duke Sambor II in 1260. Tczew was purchased by Heinrich von Plötzke of the Teutonic Knights following the Treaty of Soldin in 1309. It was rebuilt from 1364–1384 and granted Kulm law. After the Second Peace of Thorn (1466), Tczew was transferred from the Teutonic Order to the newly-created Polish province of Royal Prussia.

During the Protestant Reformation most of Tczew's inhabitants converted to Lutheranism. In 1577 the town was burnt to the ground by troops of King Stefan Batory of Poland after they defeated a rebellion by Gdańsk. A 1630 map by Willem Blaeu of the German Empire shows the city name Dirschau, as well as Kirchenbuecher [1] starting in 1637 of the mostly Protestant city. Although Tczew was rebuilt, it then suffered during the Polish-Swedish Wars.

The town was annexed from the Polish-Lithuanian Commonwealth by the Kingdom of Prussia during the Partitions of Poland. It was occupied by Polish troops of General Jan Henryk Dąbrowski in 1807 during the Napoleonic Wars, but became Prussian again in 1815. It became part of the German Empire in 1871.

Tczew grew rapidly during the 19th century after the opening of the Prussian Eastern Railway line connecting Berlin and Königsberg, with the Vistula bridge near Dirschau being an important part.

Under the Prussian and German rule, the Polish population suffered from heavy Germanization by foreign rulers of their territory;Polish farmers demanded Polish schools, and refused to teach their children German, German official Heinrich Mettenmeyer wrote that German appointed teachers were treated with highest disdain by Polish children and their parents[2]

After World War I Treaty of Versailles, Tczew became part of the Second Polish Republic when troops of General Józef Haller entered the town on January 30, 1920. The town became a center of cultural activities of the German minority in Poland, a German-language school and a theater was founded. The regional member of the Polish Parliament represented the German minority. In December 1927 the Polish Ministry of Interior organized a conference of local and regional officials to discuss ways to de-Germanize the region and to obstruct the re-election of the German delegate. The conference noticed that the local Kashubians largely supported the German politicians. Also the German language was often used by local population. The conference decided to reinforce Polish national consciousness in the region. Officials were instructed to remove their children from the German-language school, in ethnically mixed cases the official should be sent to purely Polish regions if they refuse to follow these orders; additional measures included entertainment trips to various regions of Poland to encourage association with Polish culture and invoke pride at their heritage[3] In 1931 31 children were compelled to leave the German school and sent to a Polish-language school because they were Catholics or had a “Polish-sounding” name.[4]

During the Interwar period, Tczew was famous for its maritime academy which later moved to Gdynia.

According to the city's website, Tczew was the location of the start of World War II when German bombers attacked Polish sapper installations to prevent the bridge from been blown up at 04:34 on 1 September 1939 (the shelling of Westerplatte commenced at 04:45). The town was occupied by Nazi Germany during the war and liberated in 1945. After World War II Tczew was one of the most damaged cities of Gdańsk Pomerania. Virtually none of its remaining factories were capable of production. There had been considerable loss of population down to around 18-20 thousand people. Residents took the first effort of reconstruction, and revitalization. Currently, there are several companies in the electrical industry and machine building.

The coat of arms of Tczew depicts a red griffin in honor of Duke Sambor II, who granted the town municipal rights in 1260. 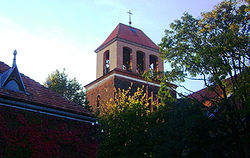 Parish Church of Exaltation of the Cross 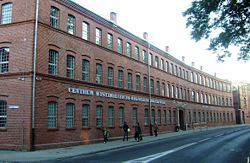 Museum of the Vistula River 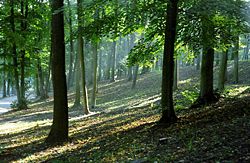 Tczew is twinned with: