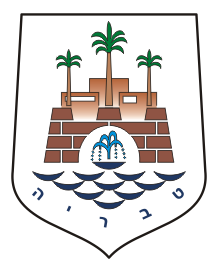 Tiberias was established in around AD 20 by , the son of , it became the capital of his realm in Galilee. It was named in honor of Antipas' patron, the . There is a myth that the site was of the destroyed village of Rakkat. [ [http://www.jewishencyclopedia.com/view.jsp?artid=205&letter=T Jewish Encyclopedia] During the persecutions in the reigns of the emperors Constantius and Gallus the Tiberian scholars decided to intercalate a month in the calendar for the year 353; but fear of the Romans led to the substitution of "Rakkath" (Josh. xix. 35) for "Tiberias"] Josephus describes the building of Tiberias by Herod Antipas near a village called .

Tiberias's name in the (and consequently the form most used in English) was its Greek form, Τιβεριάς ("Tiberiás", Τιβεριάδα "Tiveriáda"), an adaptation of the taw-suffixed Semitic form that preserved its feminine grammatical gender.

During Herod's time, the s refused to settle there; the presence of a rendered the site ritually unclean. However, Antipas forcibly settled people there from rural Galilee in order to populate his new capital. The most famous personage from Tiberias was , the chief apostle of and his most loved disciple. During the when most other cities in Palestine were razed, Tiberias was spared as its inhabitants remained loyal to Rome. [The Land and the Book: Or, Biblical Illustrations Drawn from the Manners and Customs, the Scenes and Scenery, of the Holy Land By William McClure Thomson Published by Harper & brothers, (1860) p 72] The , the Jewish court, fled from Jerusalem during the Great Jewish Revolt against the Roman Empire, and after several stations eventually settled in Tiberias. It was in fact its final meeting place before its disbandment in the early Byzantine period. Following the expulsion of all Jews from after , Tiberias and its neighbor became the major centers of Jewish culture. The , which grew into the , may have begun to have been written here.

In 613 it was the site where during the final Jewish revolt against the the Jewish population supported the Persian invaders. Following the Umayyad conquest, the Caliphate allowed 70 Jewish families from Tiberias to form the core of a renewed Jewish presence in Jerusalem. The caliphs of the Umayyad Dynasty also built one of its series of square-plan palaces (the most impressive of which is near ) on the waterfront to the north of Tiberias, at Khirbet al-Minya.

Under Byzantine and rule, the city declined and was devastated by wars and s in the including the largest earthquake, in 749, which destroyed many synagogues. Despite this decline, the community of masoretic scholars flourished at Tiberias from the beginning of the 8th century to the end of the 10th. These scholars created a systematic written form of the vocalization of ancient Hebrew, which is still used by all streams of . The apogee of the Tiberian masoretic scholarly community is personified in , who refined the vocalization system now know as and is also credited with putting the finishing touches on the , the oldest existing manuscript of the Hebrew scriptures, another indication of Tiberias' centrality to Hebrew scholarship and medieval Judaism as a whole.

The geographer writing in 985 AD, recounts that Tabariyyah is "the capital of Jordan Province, and a city in the Valley of Canaan..The town is narrow, hot in summer and unhealthy. [ ] There are here eight natural hot baths, where no fuel need be used, and numberless basins besides of boiling water. The is large and fine, and stands in the market-place. Its floor is laid in pebbles, set on stone drums, places close one to another." Muqaddesi further describes that those who suffers from scab, or ulcers, and other such-like diseases come to Tiberias to bath in the hot springs for three days. Afterwards they dip in another spring which is cold, wherupon [ ] they become cured. [Muk. p.161 and 185, quoted in Le Strange, Guy: "Palestine under the Moslems." London, 1890. p. 334-7]

Nasir-i Khusrou visited in 1047, and describes a city with a "strong wall" which begin at the border of the lake and goes all around the town except on the water-side. Furthermore, he describes:"numberless buildings erected in the very water, for the bed of the lake in this part is rock; and they have built pleasure houses that are supported on columns of , rising up out of the water. The lake is very full of fish. [] The Friday Mosque is in the midst of the town. At the gate of the mosque is a spring, over which they have built a hot bath. [] On the western side of the town is a mosque known as the Jasmine Mosque (Masjid-i-Yasmin). It is a fine building and in the middle part rises a great platform (dukkan), where they have their s (or prayer-niches). All round those they have set -shrubs, from which the mosque derives its name." [Le Strange, Guy: "Palestine under the Moslems." London, 1890. p. 336-7]

During the s it was occupied by the , soon after the capture of and it was given in fief to Tancred who made it his capital of the in the ; the region was sometimes called the Principality of Tiberias, or the Tiberiad. ["The Crusades c. 1071-c 1291" Jean Richard, Cambridge University Press ISBN 0-521-62369-3 p 71] besieged it during his invasion of the kingdom in , and in October of that year defeated the crusaders at the outside the city. Around this time the original site of the city was abandoned, and settlement shifted north to the present location.

Rabbi Moshe ben Maimon, known in English as Moses , a leading Jewish legal scholar, philosopher and physician of his period, died in 1204 and was buried in Tiberias, creating one of the city's important pilgrimage sites.

Yakut, writing in the 1220s, described Tiberias as a small town, long and narrow. He also describes the "hot salt springs, over which they have built s which use no fuel. Tabariyyah was first conquered by (the Arab commander) Shurahbil in the year 13 (634 AD) by capitulation; one half of the houses and churches were to belong to the Muslims, the other half to the Christians." [Le Strange, Guy: "Palestine under the Moslems." London, 1890. p. 340]

In 1558, , a former Jew, was given the site and its surrounding villages as a gift from . She restored the city walls, built a and encouraged fleeing the to settle in the city. Tiberias flourished again for a hundred years. It was devastated again, and again resettled by Hasidic Jews.Fact|date=October 2008 The last Jew died in 1620 at the passing of Quaresimus.

In the early 18. century, Tiberias was under the rule of the - ruler . Around 1730, Dhaher and his brother Youssef settled in Tiberias. He fortified the town and made agreement with the neighbouring Bedouin tribes to prevent their looting raids. Accounts from that time tell of the great admiration which the people had for Dhaher, especially for his war against bandits on the roads. , who visited Tiberias in 1727, witnessed the building of a fort to the north of the city, and the strengthening of the old walls, and attributed it to a disagreement with the pasha (ruler) of Damascus. [ : [http://books.google.com/books?id=wY4qAAAAMAAJ&printsec=frontcover&source=gbs_summary_r&cad=0#PPA460,M1 A Description of the East and Some other Countries] , p. 460 ] it was under Dhaher's patronage that Jewish families were encouraged to settle in Tiberias around 1742. [Moammar, Tawfiq (1990), "Zahir Al Omar", Al Hakim Printing Press, Nazareth, page 70]

In 1746, rabbi , a leading ethicist and kabbalist of his generation, died of the plague in the nearby Mediterranean port city of and was buried overlooking Tiberias, next to a site traditionally venerated as the grave of Rabbi .

Between the 8 and 9 April sporadic shooting broke out between Palestinian Jewish and Palestinian Arab neighbourhoods of Teberias. On 10 April 1948, the Haganah, launched a violent mortar barrage against the Palestinian Arab residents. [Benny Morris (2004) p183] The British Mandatory authorities demanded that the entire Jewish population of Tiberias immediately remove itself from Tiberias or be prepared to suffer British shelling in support of the Arab attack. The counterattacked the “Arab Liberation Army” commanded by , and captured Arab villages and neighborhoods which were deemed hostile. They razed these Arab villages to the ground and partly caused the exodus, under British military protection, of the entire Arab population. As a result of these conflicts, Tiberias and , where the population had been mixed, became all-Jewish cities. [cite web |url=http://www.rosenblit.com/Law.htm |title=The Rosenblits' Website |accessdate=2007-11-29 |format=.jpg|work=The Rosenblits' Website ]

Today, Tiberias is Israel's most popular holiday resort in the northern part of the country.

In October 2004, a controversial group of s claiming to represent varied communities in undertook a ceremony in Tiberias, claiming to have established a new Sanhedrin. [ [http://www.israelnationalnews.com/News/News.aspx/70349 Sanhedrin Launched In Tiberias] Israel National News, 13 October 2004]

Hapoel Tiberias represented the city in the top division of football for several seasons in the 1960s and 1980s, but eventually dropped into the regional leagues and folded due to financial difficulties.