The University of Delhi (or simply DU) (Hindi: दिल्ली विश्वविद्यालय) is a central university situated in Delhi, India and is funded by Government of India. Established in 1922, it offers courses at the undergraduate and post-graduate level. Vice-President of India Mohammad Hamid Ansari is the Chancellor of the university. It has been ranked 371 in the whole world in the year 2010 by the THES - QS world universities ranking.[2] The university has two campuses, namely north campus and south campus in the northern and southern part of the city respectively. The north campus is well connected with the yellow line of the Delhi Metro. The station is called Vishwavidyalaya, which means "university" in Hindi and Sanskrit. North campus is about 2.5 km from Delhi Vidhan Sabha and 7.0 km from ISBT. 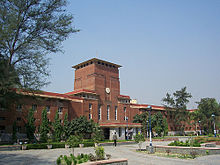 The University of Delhi is the premier university of the country and is known for its high standards in teaching and research and attracts eminent scholars to its faculty. It was established in 1922 as a unitary, teaching and residential university by an Act of the then Central Legislative Assembly. The President of India is the Visitor, the Vice President is the Chancellor and the Chief Justice of the Supreme Court of India is the Pro-Chancellor of the University. Ever since its inception, a strong commitment to excellence in teaching and research has made the University of Delhi a role-model and path-setter for other universities in the country. Its rich academic tradition has always attracted the most talented students who later on went on to make important contributions to their society. When the University took birth, only three colleges existed in Delhi then: St. Stephen’s College founded in 1881, Hindu College founded in 1899 and Ramjas College founded in 1917, which were subsequently affiliated to it. The University thus had a modest beginning with just three colleges, two faculties (Arts and Science) and about 750 students. In October 1933, the University offices and the Library shifted to the Viceregal Lodge Estate, where Viceroy Lord Hardinge stayed (1912-1931)[3], and till today this site houses the offices of the main functionaries of the University. The University has grown into one of the largest universities in India. At present, there are 16 faculties, 86 academic departments, 77 colleges and 5 other recognised institutes spread all over the city, with 132435 regular students (UG: 114494,PG:17941) and 261169 students (UG:258831,PG:2338) in non-formal education programme. Sir Maurice Gwyer, the then Vice-Chancellor, realizing the importance of a distinguished faculty to act as role models, relentlessly searched for talent all over the country and roped in men of eminence to this University, such as Prof. D.S. Kothari in Physics, Prof. T.R. Sheshadri in Chemistry, Prof. P Maheshwari in Botany and Prof. M L Bhatia in Zoology. Five Departments namely Chemistry, Geology, Zoology, Sociology and History have been awarded the status of the Centres of Advanced Studies. These Centres of Advanced Studies have carved a niche for themselves as centres of excellence in teaching and research in their respective areas. In addition, a good number of University departments are also receiving grants under the Special Assistance Programme of the UGC in recognition of their outstanding academic work. 10 Departments (Germanic & Romance Studies, Hindi, Persian, Geography, Music, East Asian Studies, Anthropology, Mathematics, B.R.Ambedkar, M. I.L.) are getting grants under DRS, 2 Departments (Buddhist Studies, English) are getting grants under DSA, 3 Departments (English, Buddhist Studies, Social Work) are getting grants under AISHSS and 3 Departments (African Studies, East Asian Studies, Developing Countries Research Centre) are getting grants under Area Studies Programmes. Department of Adult, Continuing Education and Extension and Women’s Studies & Development Centre of the University are also getting special funding from UGC. The University today boasts of as many as 15 big libraries apart from libraries in colleges. The University Science Instrumentation Centre (USIC) which is now situated close to the Physics and Chemistry Departments houses a number of sophisticated and high-end research instruments. These instruments are used quite frequently by Teachers and Research Scholars of postgraduate departments of the University as well as by many other institutions in Delhi and its neighbourhood. The University has recently laid fibre-optic network in the North and the South Campuses connecting all colleges and departments. When the University of Delhi expanded in many directions to keep pace with a rapidly growing city, South Campus was established in 1973 to facilitate access for the residents of South Delhi. It moved to its present location on Benito Juarez Road, near Dhaula Kuan, in 1984. The Campus is now spread across 69 acres of green, hilly terrain and its buildings blend attractively with the natural surroundings. The various departments are located in the Faculty of Arts and the Faculty of Inter-disciplinary and Applied Sciences. S.P. Jain Centre for Management Studies is also located at the South Delhi Campus. Besides these, the Campus has a good library, a Health Centre, a Bank, a Post Office, DTC Pass Section and administrative and examination blocks. South Campus also provides some residential quarters for faculty members and the non-teaching staff. Outstation students are offered accommodation in three hostels.

The University of Delhi was established in 1922 as a unitary, teaching and residential university by an Act of the Central Legislative Assembly. The first convocation of Delhi University was also held in the Assembly Hall in Old Secretariat Building which now houses the Legislative Assembly of Delhi, on 26 March 1923 with 750 invitees. Honorary Degrees were conferred on Lord Reading (Viceroy of India), Sir Md. Jahan and Sir Hari Singh Gaur, the first Vice Chancellor of the University.[4] Only three colleges existed then in Delhi: St. Stephens College founded in 1881, Hindu College founded in 1899 and Ramjas College founded in 1917, which were affiliated to the University. The University thus had a modest beginning with just three colleges, two faculties (Arts and Science) and about 750 students. The first college to move to the campus was St Stephen's in 1942, followed by Hindu, Ramjas and Commerce (now known as Shri Ram College of Commerce). There was Zakir Husain College also, The origin of the Zakir Husain College can be traced to the closing years of the 17th Century.[5]

In October 1933, the University offices and the Library shifted to the Viceregal Lodge Estate, which had been the residence of the Viceroy and Governor-General of India, Rufus Isaacs and later Lord Mountbatten. Till today this site is the nucleus of the University (Main Campus).[6] Apart from central administrative offices, examination offices and the sports complex, the main departments of the Faculty of Science are housed in the Viceregal Lodge Estate. Sir Maurice Gwyer, who was the then Vice Chancellor, realizing the importance of a distinguished faculty, searched for talent all over the country and brought men of eminence to this University, such as Prof. D S Kothari in Physics, Prof. T R Sheshadri in Chemistry, Prof. P Maheshwari in Botany and Prof. M L Bhatia in Zoology.

The silver jubilee year of the university in 1947 also marked India's independence, and the National flag was hoisted in the main building for the first time by VKRV Rao, the convocation ceremony for the year, however could not be held due to partition disturbances, thus a special ceremony was held in 1948, which was attended by prime minister Jawaharlal Nehru, Lord Mountbatten, Lady Mountbatten, Abul Kalam Azad, Zakir Hussain and S.S. Bhatnagar. Twenty-five years later the golden jubilee celebrations of 1973 were attended by then Prime minister, Indira Gandhi, Satyajit Ray, Amrita Pritam and M S Subbulakshmi.[7]

Over the last seven decades the University has grown into one of the largest universities in India. At present, there are 14 faculties, 86 academic departments and 79 colleges spread all over the city, with about 220,000 students.,[8] and the annual honorary degrees (Honoris causa) of the University have been conferred upon several distinguish people, including Amitabh Bachchan, Delhi Chief Minister Sheila Dikshit, Cardiologist Dr. Jayantibhai Patel, cartoonist R K Laxman and scientist CNR Rao (2006);[9] and British Prime Minister Gordon Brown (2008).[10]

The South Campus made a beginning in 1973 by starting postgraduate programmes in some departments of the Faculties of Arts[11] and Social Sciences in a rented building. It was allotted land near Dhaula Kuan and offices and teaching activities shifted to this campus in 1983. This campus is known for excellence in life sciences with the departments like Plant molecular Biology, Genetics, Microbiology, and Biochemistry. The Biotech centre in this campus of University of Delhi is running various industry integrated research. The centre of Plant Molecular Biology in this department is one of the seven centers in INDIA funded by DBT. South campus is presently running various masters and doctoral degree programs in various field like Plant Molecular Biology and Biotechnology, Microbiology, Biochemistry, Electronics, Information Technology etc.

DULS has 34 libraries with web activity and a subscription to 29 electronic databases. In addition to this 20 more databases are also accessible through UGC-INFONET Digital Library Consortium. DULS also promotes Open Access e-resources. DULS is regularly conducting Information Literacy Programs (ILP) for the benefit of students, researchers and Faculty members .[14]

The University at present has 65 colleges that have liberal courses in humanities, social sciences and science courses. Twenty five of these colleges are affiliated to the South Campus while the others are to the North Campus. All these colleges except two, Lady Irwin College and Institute of Home Economics, are undergraduate colleges.

The total number of colleges under the University goes up to 77 if you include the colleges that run the professional courses.

The academic session the University starts on 21st July every year while admissions for the regular courses are held in June-July. Admission in courses that are done through entrance examination follow a different schedule.

Admission to the Undergraduate courses in Colleges

Admission to all the undergraduate courses (except the professional ones) is carried out by each college though the system and schedule is common and announced by the University each year in the month of May. From the year 2011 onwards, the University is doing away with the requirement of preregistration for admission: See link.

The University does not hold any entrance exam (except for B.A. (H) English) but scores of Higher Secondary School examination are taken into consideration.

The colleges decide the cut off percentage (minimum marks required) for each of their courses and is released by the University on re-decide date as cut off lists. Once the cut off percentage is released, any student who has the requisite percent can approach the college and seek admission within a number of days specified by University. If seats are available, university announces second cut-off list and calls for admission. Up to five lists are announced by the university. If seats are completely filled in certain courses in a college, no further cut-off of that course is announced.Here is the First cut-off list of 2010 for science courses. It must be noted that those who do not take admission despite falling in the range released will not be admitted when the next list with lower percentage is announced.

Admissions based on excellence in Extracurricular Activities and Sports is carried out after conducting trials by the colleges. Students need to apply separately to each college for being considered for admission under these categories.

The University also reserves seats for students who are physically handicapped or belong to the Scheduled castes or scheduled tribes as per GOI policy. Students who seek admission under these categories need to register centrally in the University of Delhi. The University allocates the course and college to these students based on their choice and availability.

Main article: List of alumni of the University of Delhi

Below is a list of distinguished Delhi University alumni in alphabetical order: