Delhi Suburban Railway services is a commuter rail service operated by Northern Railway zone of the Indian railways for the National Capital Region. This Railway services covers the city state of Delhi, along with the adjoining districts of Faridabad,Ghaziabad and other adjoining places in Haryana and Uttar Pradesh. These services are mostly run using EMU and MEMU rakes. This also includes passenger trains and DMU services up to Rewari in Haryana, which is also considered part of the National capital region.

Delhi Suburban Railway uses the same tracks that are also used for long distance trains. In 2009 Ladies Special trains were introduced between New Delhi and Palwal. Two more ladies special train will be connecting from the city to Gaziabad and Panipat.[1]

The services are currently available on the following routes.

At present, EMUs in Delhi run with twelve coaches, of which ten are general compartments and two are ladies compartment. As per the Northern Railway estimates, there are more than 110 suburban trains, which ply on important sections, often crowded beyond limit during peak hours.

Delhi Ring Railway is part of the Delhi Suburban Railway services.The Ring Railway is a circular rail network in Delhi, which runs parallel to the Ring Road and was conceived during the 1982 Asian Games. 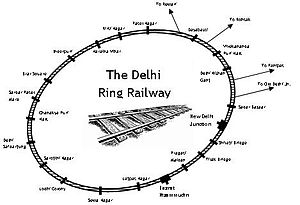 The ring-railway service was introduced on a track laid in the late 1970s so that the large number of goods trains originating, terminating, or passing through the city, could bypass the main passenger stations at New Delhi, Old Delhi and Hazrat Nizamuddin. The track was called the 'Delhi Avoiding Line'. Today, however, the Northern Railway’s service for passengers within the city has become something which Delhiites are avoiding. There are 12 electric trains on the ring rail. It can take 7,000 people off the crowded streets daily.[citation needed] However, currently they ferry only 1,500 passengers. Only three of the twelve EMUs run to full capacity. The rest have just one to two per cent occupancy.[citation needed] The ring railway starts and ends at the Hazrat Nizamuddin Railway Station with trains running in both clockwise and anti-clockwise directions around the city.

The system is not popular amongst people and a total failure as far as public transport is considered.[citation needed] Delhi Ring Railway is considered as an example of failed mass transit system. The major reasons for failure of the system are lack of proper connectivity, less population density in areas of reach. The network is now utilized as a freight corridor and limited passenger EMU train services are available during peak hours.

With Delhi Metro growing at a rapid pace, there has been very little focus to improve the condition of the Delhi Suburban Railway. There have been reports of strengthening the services so that more commuters can avail themselves of the facility. Feasibility studies have also been done, and in deference to the commuter demand, there were also plans to start EMU services from Gurgaon[citation needed]. An integrated rail-bus transit (IRBT) system to connect Delhi with the satellite towns of Gurgaon, Ghaziabad, and Sahibabad is being promoted by the government.[2] A feasibility study has already been completed, and a steering committee has been appointed to monitor the project. The IRBT will have two dedicated tracks.

With the 2010 Commonwealth Games scheduled in New Delhi. The Delhi Ring Railway is all set for revival. On the request of Delhi Chief Minister Sheila Dikshit, the Union Minister for Railways Mamata Banerjee mentioned that the Railways is planning to re organize and improve the circular rail network that runs parallel to the Ring Road.[3]