Quindío (Spanish pronunciation: [kinˈdi.o]) is a department of Colombia. It is in the western central region of the country, crossed by the Andes mountains. Its capital is Armenia. It is famous for the quality of the coffee plantations, colorful architecture, benign weather, variety of hotel accommodations and touristic landmarks. This department is located in a strategic area, in the center of the triangle formed by the three main cities of the country: Bogotá, Medellín and Cali. Quindio is the second smallest Colombian department (0.2% of the national territory) with 12 municipalities. Ethnographically and culturally it belongs to the Paisa region.

Before the Spanish invasion the entire area was inhabited by the peoples of the Quimbaya civilization until the 10th century B.C. At the time of Spanish conquest the area was inhabited by indigenous people of Carib descent known as the Pijao tribes. The native population was gradually reduced due to slavery and armed confrontations, causing the territory to remain mostly uninhabited over the following centuries. At the present time, only a small population of nearly 2000 Amerindians remains in an indigenous reservation near La Tebaida.

The first settlement to be founded in the area was Salento in 1842. In the 19th century northern peasants from Antioquia set out to settle in the area and their goal was to stay there permanently in a process known as Colonización antioqueña (Antioquian Colonisation). Due to the inaccessibility of the territory and the lack of roads, trade and communications were made through mule caravans (arriería). The capital city, Armenia was founded on October 14, 1889 by colonists led by Jesus Maria Ocampo. In 1905, the old Department of Antioquia was partitioned into two, giving rise to the new Department of Caldas, which at the time included the modern department of Risaralda. In 1908 the territory, then in jurisdiction of the Cauca Department, was annexed to Caldas department. From 1948, this was one of the most affected departments by an armed conflict known as La Violencia, with casualties and damages to property in all municipalities.

In 1966, (January 16) it's separated as an autonomous department itself. The project for the creation of the new department was developed by the local politician Ancizar López who became the first governor. In 1999 the capital city and many villages and towns were partially destroyed by an earthquake. (See 1999 Armenia earthquake) The rebuilding was financed by national and international donations managed by a public organization known as FOREC (acronym for Fund for Reconstruction of Colombian Coffee-Growers Axis).

Other relevant events in the history of the Quindio department are:

also see list of Governors of the Department of Quindío. 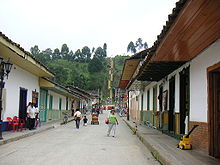 In order of population:

Most of its surface is occupied for the western face of the Cordillera Central. Highest mountain: Nevado del Quindío, (Snow Mountain of Quindio) 5.150 m high. The lowest area is the valley of la Vieja River, 1.100 m high.

There are in this department about 1.845 km2 (1 sq mi) of mountain landscapes, with many Rainforests and Guadua bamboo forests. The ground is enriched with ancient volcanic eruptions, rising its fertility, there are also many rivers and minor water streams, including the Quindío River and the Cocora valley located in this river origin.

The weather has a wide range, given the variations on termic floors. It has a high annual rain precipitation (around 2500 mm/year) because the humidity of winds from the Pacific Ocean stopped by the Andes. There are two rainy seasons (April and November). The average of temperature is between 24°C in La Vieja river and 16°C in Salento. 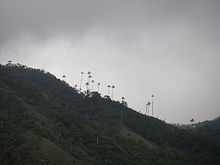 Quindio Wax palm tree is the national tree of Colombia

With law 61 of 1985, the Colombian Congress adopted Quindío Wax Palm Tree [ Ceroxylon quindiuense (Karsten) Wendl.], a local endangered species of high-altitude-adapted palm tree, as the National Tree. As ratified on September 16 for the current president of Colombia, Belisario Betancur, in the following terms: "1º. It's declared as national tree and symbol of our fatherland the species commonly known as quindio wax palm tree, scientific name ceroxylon quindiuense. 2º. National Government Is faculted to buy as many lands as needed to create wildlife sanctuaries with the purpose of preserve this national symbol and its natural environment. 3º. Chopping down the wax palm tree is forbidden and punished with fine and jail"."

The wax palm tree was nearly extincted for the extraction of the resinous substance that it exudes. Furthermore, its leaves were widely used for the celebration of Holy Week processions, especially Palm Sunday.

Economy is mainly based in the harvest of coffee plant. It is one of the most important producers of Colombian coffee. The department belongs to the Colombian Coffee-Growers Axis which is the centre of production and export of the highest quality coffee in Colombia. Plantain, cassava, Salentune potato and sugarcane are also cultivated, mostly for consume in the local markets.

In recent years, due to instability in the international coffee market, and attacks on the coffee fields by plagues such as Roya (Hemileia vastatrix) and Broca (Coffee borer beetle) (Hypothenemus hampei), interest has been directed to alternative options like citrus fruits and macadamia nuts. There is, however a growing tourism industry based in the interest of traditional peasant culture, natural resources, and typical landscapes.

Nevertheless, since the Tourism industry is seasonal and the agriculture is debilitated, there is lack of steady jobs and sources of income, and as result the department has the highest rates of unemployment in the country (data from the National department of Statistics DANE 2003). 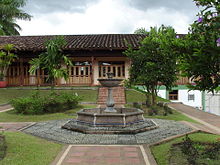 Coffee is the base for several different drinks and food in the quindio cuisine. In the picture, Cafe Cortado

Some of the typical food and drinks are:

Quindio department is the main exponent of traditional Cultura Cafetera (coffee culture) in the country, and there are several events all around the year that attracts a large number of visitors to this region. With the purpose of preserve this cultural expressions, the regional government promotes the declaration of Patrimony of Humanity by the Unesco[3] 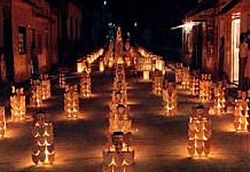 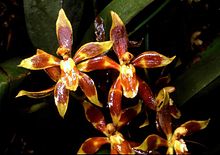 Quindio is the natural habitat of 520 species of birds and about 60 species of mammals. Many of them are endemisms. The area has the largest number of heliconia species in the world and a large numbers of species of orchids, mainly of the genera cattleya, odontoglossum, miltonia, phragmipedium and peristeria. Due to agricultural activities the amount of natural forests typical of the area, such the páramo, the cloud forest are decreasing progressively. This has caused that many of the endemic species are threatened, endangered or critically endangered. Some of them are: