Magdalena is a department of Colombia, located to the north of the country by the Caribbean Sea. The capital of the Magdalena Department is Santa Marta and was named after the Magdalena River. It inherited the name of one of the original nine states of the United States of Colombia that its current territory integrated. 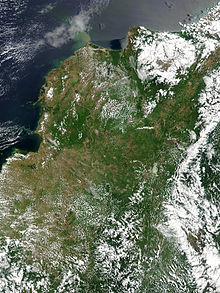 The Department of Magdalena is located on the North Coast of the Colombian Caribbean Region.

On the west, it is divided by the Magdalena River, and it borders the departments of Atlantico in the Northwest, and Bolívar in the West and Southwest.

The territory of the Department of Magdalena is formed by four drainage basins which are very different in composition and importance. 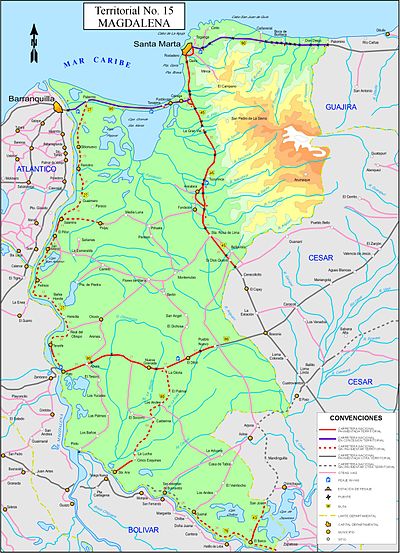 The drainage basin of the Sierra Nevada’s western slope is located in the northern part of the department. The Sierra Nevada de Santa Marta creates different rivers that run mainly through the municipality of Santa Marta, and that finally end up draining into the Caribbean Sea.

The rivers that form part of this basin are:

This basin gathers its waters from the rivers coming from the southern and western slopes of the Sierra Nevada. The basin irrigates great extensions of the municipalities of Ciénaga, Zona Bananera, Fundación, Aracataca, and El Retén, which are the heart of the agricultural and livestock economy of the department. The rivers that form part of this basin are:

It also consists of a small number of arroyos that only flow during the rainy seasons.

This basin also encompasses the Ciénaga Grande de Santa Marta, the largest marsh in the north of the country, which is formed by 16 smaller marshes that are connected by means of arms within the march. The balance of the march is a delicate one that depends on the fresh waters coming from the Sierra Nevada, and the periodical flooding of the Magdalena River, and the salt water coming from the mouth of the March to the sea, that is carried by the current and winds into the marshland. 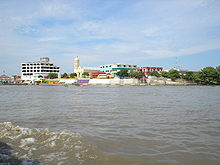 View of the municipality of El Banco from the Magdalena River 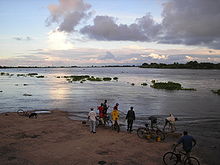 Overflow of the Magdalena River caused floodings in 2005.

The Mompóx Depression is found within this basin, this depression runs from the Zapatosa Marsh to the delta of the Magdalena River. This depression collects the most water in the department as its where the Cauca River, Cesar River, and the San Jorge River drain its waters. The Magdalena River is by far the most affluent river of these, and during the rainy season when it overflows, it causes the other rivers to flow backwards, not before overflowing the marshes and sometimes flooding some valleys.

The Ariguaní River drains into the Magdalena River through the Zapatosa Marsh and washes over the central valleys of the departments of Magdalena and Cesar that are the principal areas of agriculture and animal husbandry in the Caribbean Region. 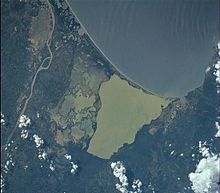 The Ciénaga Grande de Santa Marta, is the biggest and by far the most important marsh in the department of Magdalena and one of the most important marshes in the country. It is located in the northwest of the department and is separated from the sea by a very thin margin of land, only a few meters away. It has an extension of 4,280 km², of which 730 km² are just water mirrors with a depth of 2 to 6 meters.

The Zapatosa Marsh, located in the municipality of El Plato in the southernmost part of the department, it is shared with the Cesar Department, who controls most of its waters. It has an extension of 310 km² and at its deepest it reaches about 8m. In it many rivers of different importance merge. The Zapatosa Marsh drains into the Magdalena River by an arm of about 16 km of length.

The Department of Magdalena, because of its terrain, and proximity to the sea has an unstable weather. Its Climate is mainly dictated by its global positioning, and because the department of Magdalena is located on the Intertropical Convergence Zone it possess an inter-tropical climate. Temperature in the department is affected by ocean currents, precipitation and atmospheric pressure, it mainly has a hot temperatures with high humidity, but temperatures vary as altitude raises.

The altitude of the department goes from 0m to 5,775m above sea levels, the drastic changes of altitude divide the territory into what is called thermal floors. There are no solid or determined divides between these floors as local factors can affect the temperature. The first 200m of altitude are considered the warm lands, they occupy a great extension of the departmental territory, the average temperature is of 30°C. The main urban centers are located in the warm lands, including all of the downtown urban area of Santa Marta. The altitude increase because of the Sierra Nevada de Santa Marta, an isolated mountain, the highest at sea level, and temperatures raise as it goes up. 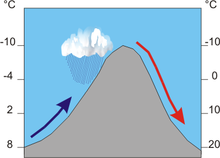 Illustration of the Föhn effect

The presence of the Sierra Nevada in this area of the country has consequences in the climate of the department, the SNSM stands windward blocking the path of the Trade winds that blow from the North and Northeast creating a greater cloud accumulation and precipitation. The winds that crash into the mountain ascend in an Orographic lift, this cooler air cannot hold the moisture as well as warm air and this effectively raises the relative humidity, creating clouds and frequently precipitation. The clouds that manage to pass over the mountain, move hastily downwards creating foehn winds that raise the temperature of the area west of the Sierra, which include the Santa Marta, and Ciénaga.

In the coastal area, droughts are cause by the diversion of the cold and warm katabatic winds coming down the Sierra, however the sea breezes help to cool down temperatures a bit, but by because of their direction, they end up extending the drought effects farther inland.

The department of Magdalena due to its location in the Intertropical Convergence Zone has only two seasons. The Rainy season takes place between April and November, with a period of less intensity between June and August. The dry season takes place during December and March.

The Mompox Depression presents its own climatic conditions due to its many permanent bodies of water, like the different ciénagas or mashes, and rivers and lakes. This wet habitat, permanently exposed to solar radiation, makes for a very humid environment, with an average annual rainfall of between 1,500 to 2,000mm, these rains are Convection rains as they are created by evaporation of its waters by high temperatures, this is typical precipitation around the equatorial belt.

Due to its complicated geography, the precipitation in the department ranges from 250mm in the driest areas, to 4,000mm in the cold floors of the Sierra Nevada. 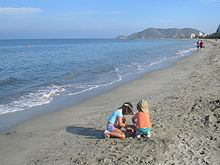 Kids playing in the beach in Santa Marta 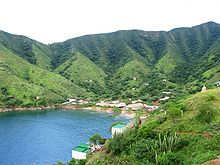 The territory of Magdalena has an area of approximately 23,188 km², small compared to other regions, but in its territory various types of different ecoregions are found. From the beaches and sea landscape in the North, the snow covered peaks in the Sierra, the swampy marshes in the west, the cloud forests, to the grasslands inland, the urban districts, the farmlands, the dry desert like, the deep rain forest, the rocky rivers to many other small ecosystems. These ecosystem support different fauna and flora and house many delicate species.

According to the World Wide Fund for Nature, in the Magdalena Department 8 different distinct ecoregions are found in its territory.

The Department of Magdalena is subdivided into 30 Municipalities, and 1 District, the municipalities are governed by a democratically elected Municipal Mayor and a Municipal council, and the Touristic, Cultural and Historic District of Santa Marta is administered by the Municipality of Santa Marta and has special distinction within the country.