Caecilian
This article is about an order of amphibians. For the bishop of Carthage, see Caecilianus.

The caecilians /siːˈsɪliənz/ are an order (Gymnophiona) of amphibians that superficially resemble earthworms or snakes. They mostly live hidden in the ground, making them the least familiar order of amphibians. All extant caecilians and their closest fossil relatives are grouped as the clade Apoda. They are mostly distributed in the tropics of South America, Africa, and South Asia. The diet of caecilians is not well known.

Caecilians completely lack limbs, making the smaller species resemble worms, while the larger species with lengths up to 1.5 m (4 ft 11 in) resemble snakes. The tail is short or absent, and the cloaca is near the end of the body.

Their skin is smooth and usually dark-matte, but some species have colorful skins. Inside the skin are calcite scales. Because of these scales, the caecilians were once thought to be related to the fossil Stegocephalia, but they are now believed to be a secondary development, and the two groups are most likely unrelated.[2] The skin also has numerous ring-shaped folds, or annuli, that partially encircle the body, giving them a segmented appearance. Like other living amphibians, the skin contains glands that secrete a toxin to deter predators.[1] The skin secretions of Siphonops paulensis have been shown to have hemolytic properties.[3]

Caecilians' vision is limited to dark-light perception,[4] and their anatomy is highly adapted for a burrowing lifestyle. They have a strong skull, with a pointed snout used to force their way through soil or mud.[2] In most species, the number of bones in the skull are reduced and fused together, and the mouth is recessed under the head. Their muscles are adapted to pushing their way through the ground, with the skeleton and deep muscles acting as a piston inside the skin and outer muscles. This allows the animal to anchor its hind end in position, and force the head forwards, and then pull the rest of the body up to reach it in waves. In water or very loose mud, caecilians instead swim in an eel-like fashion.[1] Caecilians in the family Typhlonectidae are aquatic as well as being the largest of their kind. The representatives of this family have a fleshy fin running along the rear section of their body, which enhances propulsion in water.[5]

All but the most primitive caecilians have two sets of muscles for closing the jaw, compared with the single pair found in other creatures. These are more highly developed in the most efficient burrowers among the caecilians, and appear to help keep the skull and jaw rigid.[1]

Adapting to their underground life, the eyes are small and covered by skin for protection, which has led to the misconception that they are blind. This is not strictly true, although their sight is limited to simple dark-light perception. All caecilians possess a pair of tentacles, located between their eyes and nostrils. These are probably used for a second olfactory capability, in addition to the normal sense of smell based in the nose.[1]

Except for two lungless species — Atretochoana eiselti and Caecilita iwokramae — all caecilians have lungs, but also use the skin or the mouth for oxygen absorption. Often the left lung is much smaller than the right one, an adaptation to body shape that is also found in snakes.[citation needed]

Caecilians are found in wet tropical regions of Southeast Asia, India and Sri Lanka, parts of East and West Africa, the Seychelles islands in the Indian Ocean and in northern and eastern South America. In Africa caecilians are found from Guinea-Bissau (Geotrypetes) to Southern Malawi (Scolecomorphus), with an unconfirmed record from eastern Zimbabwe. They have not been recorded from the extensive areas of tropical forest in central Africa. In South America they extend through subtropical eastern Brazil well into temperate northern Argentina. They can be seen as far south as Buenos Aires, when they are carried by the flood waters of the Paraná River coming from farther north. The northernmost distribution is of the species Ichthyophis sikkimensis of Northern India. Ichthyophis is also found in South China and North Vietnam. In Southeast Asia, they do not cross Wallace's Line, and they are not found in Australia or the islands in between.

Caecilians are the only order of amphibians that use internal insemination exclusively (although the tailed frog in the U.S. does use a tail-like appendage for internal insemination in its fast flowing water environment). The male caecilians have a penis-like organ, the phallodeum, which is inserted into the cloaca of the female for 2 to 3 hours. About 25% of the species are oviparous (egg-laying); the eggs are guarded by the female. For some species the young caecilians are already metamorphosed when they hatch; others hatch as larvae. The larvae are not fully aquatic, but spend the daytime in the soil near the water.[1]

75% of the species are viviparous, meaning that they give birth to already developed offspring. The fetus is fed inside the female with cells of the oviduct, which they eat with special scraping teeth.

The egg laying species Boulengerula taitana feeds its young by developing an outer layer of skin, high in fat and other nutrients, which the young peel off with similar teeth. This allows them to grow by up to ten times their own weight in a week. The skin is consumed every three days, the time it takes for a new layer to grow, and the young have only been observed to eat it at night. It was formerly thought that the juveniles subsisted only on a liquid secretion from their mother.[6][7]

Some larvae, such as those of Typhlonectes, are born with enormous external gills which are shed almost immediately. Ichthyophis is oviparous and known to show maternal care, with the mother guarding the eggs until they hatch.[2]

The diet of caecilians is not well known. Mature caecilians seem to feed mostly on insects and other invertebrates found in the habitat of the respective species. The stomach contents of 14 specimens of Afrocaecilia taitana consisted of mostly undefinable organic material and plant remains. Where identifiable remains were most abundant, they were found to be termite heads.[8] While it was suggested[specify] that the undefinable organic material shows that the caecilians eat detritus, others believe these are in fact the remains of earthworms. Caecilians in captivity can be easily fed with earthworms, and worms are also common in the habitat of many caecilian species.

The name caecilian derives from the Latin word caecus, meaning "blind", referring to the small or sometimes non-existent eyes. The name dates back to the taxonomic name of the first species described by Carolus Linnaeus, which he gave the name Caecilia tentaculata.[2] The taxonomic name of the order derives from the Greek words γυμνος (gymnos, naked) and οφις (ophis, snake), as the caecilians were originally thought to be related to snakes. 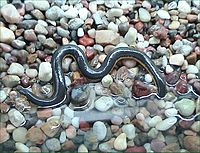 Caecilian from the San Antonio Zoo 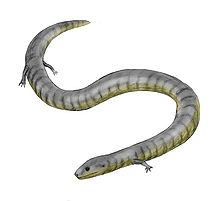 Little is known of the evolutionary history of the caecilians, which have left a sparse fossil record. The first fossil, a vertebra dated to the Paleocene, was not discovered until 1972.[11] The putative earliest fossil known comes from the Jurassic period; its primitive genus, Eocaecilia, had small limbs and well-developed eyes.[12] In their 2008 description of the fossil batrachian Gerobatrachus[13] Anderson and co-authors suggested that caecilians arose from the Lepospondyl group of ancestral tetrapods, and may be more closely related to amniotes than to frogs and salamanders, which arose from Temnospondyl ancestors. Divergent origins of caecilians and other living amphibians may help explain the slight discrepancy between fossil dates for the origins of modern amphibia, which suggest Permian origins, and the earlier dates, in the Carboniferous, predicted by molecular clock studies of DNA sequences. Most morphological and molecular studies of living amphibians, however, support monophyly for caecilians, frogs, and salamanders, and the most recent molecular study based on multi-locus data suggest a Late Carboniferous–Early Permian origin of living amphibians.[14]