The Roman Catholic Archdiocese of Philadelphia is an ecclesiastical territory or diocese of the Roman Catholic Church in southeastern Pennsylvania, in the United States. It covers the City and County of Philadelphia as well as Bucks, Chester, Delaware, and Montgomery counties. The diocese was erected by Pope Pius VII on April 8, 1808, from territories of the Archdiocese of Baltimore. Originally the diocese included all of Pennsylvania, Delaware, and seven counties and parts of three counties in New Jersey. The diocese was raised to the dignity of a metropolitan archdiocese on February 12, 1875. The seat of the archbishop is the Cathedral-Basilica of Ss. Peter & Paul.

It is also the Metropolitan See of the Ecclesiastical Province of Philadelphia, which includes the suffragan episcopal sees of Allentown, Altoona-Johnstown, Erie, Greensburg, Harrisburg, Pittsburgh, and Scranton. The territory of the Province is coextensive with the state of Pennsylvania.

History of the archdiocese

The history of the Catholic Church in the area dates back to William Penn and when Mass was said publicly as early as 1707.[2] On April 8, 1808, the suffragan dioceses of Boston, New York, Philadelphia, and Bardstown (moved to Louisville in 1841) were erected by Pope Pius VII from the territory of the Diocese of Baltimore, which was simultaneously raised to the rank of metropolitan archdiocese.[3] Michael Egan was appointed as the first bishop[4] and was consecrated as a bishop on October 28, 1810, by Archbishop John Carroll.[5]

In 1868, the dioceses of Harrisburg, Scranton, and Wilmington (Del.) were erected from the territory of the diocese.[2] Philadelphia was raised to a metropolitan archiepiscopal see on February 12, 1875,[2] with Harrisburg and Scranton as suffragan dioceses. On January 28, 1961, the five northern counties of Berks, Carbon, Lehigh, Northampton, and Schuylkill were split off from the archdiocese, to create the Diocese of Allentown.

On February 10, 2011, a grand jury accused the Archdiocese of Philadelphia of failing to stop the sexual abuse of children. A church official, William Lynn, was charged with endangering the welfare of children while two other priests, Edward Avery and Charles Englehardt were charged with rape and indecent assault of a minor.[6] 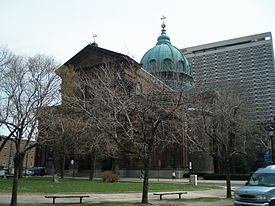 The Cathedral Basilica of SS. Peter and Paul

Other bishops who once were priests in the Archdiocese of Philadelphia

Note: Years in parentheses indicate the time of service as a priest of the Archdiocese of Philadelphia, prior to appointment to the episcopacy.

The archdiocese is sub-divided into six vicariates, each administered by a regional vicar.[8] Present vicariates and their administrators:

With the foundation of Archbishop Ryan School for Children with Deafness in 1912, the Archdiocese of Philadelphia embarked on a proud history of serving families of children with special needs. In 1951, John Cardinal O'Hara responded to the requests of hundreds of parents who sought education, and particularly education in the faith, for their children with mental retardation. As a result, St. Katherine Day School and Our Lady of Confidence School were opened in 1953 and 1954 respectively, and again in response to parent petition, St. Lucy Day School for Children with Visual Impairment was founded in 1955. Queen of the Universe Day Center was added in 1980 to serve students with mental retardation in Bucks County. These five schools of special education have been generously supported by the Catholic Charities Appeal.

High schools within the archdiocese

Leadership within the Archdiocese of Philadelphia envisioned a continued comprehensive education for secondary students.

The first free Catholic high school in the United States was the "Roman Catholic High School of Philadelphia", founded for the education of boys in 1890. (It is often referred to as "Roman Catholic", occasionally as "Catholic High", and most commonly as "Roman".) The "Catholic Girls High School" was founded in 1912. Mary McMichan, one of the school's founders, requested in her last will that the school be renamed in honor of her brother. The school became "John W. Hallahan Catholic Girls High School" after her death. Both schools are still in existence.

Though not funded or operated by the archdiocese, the following independent schools operate with the blessing and spiritual support of the archdiocese:

Colleges and universities within the archdiocese

Note: Each Roman Catholic college and university within the archdiocese is affiliated with a religious order, rather than the Archdiocese of Philadelphia.