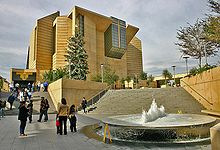 Cathedral of Our Lady of the Angels, seat of the Roman Catholic Archdiocese of Los Angeles

The Archbishop of Los Angeles also serves as metropolitan bishop of the suffragan dioceses within the Ecclesiastical Province of Los Angeles, which includes the Dioceses of Fresno, Monterey, Orange, San Bernardino, and San Diego.

The archdiocese is led by the archbishop, who governs from the mother church, the Cathedral of Our Lady of the Angels. The cathedral was dedicated on September 2, 2002, and replaced the former Cathedral of Saint Vibiana, damaged in the 1994 Northridge earthquake.

The Archbishop of Los Angeles is the metropolitan of the Province of Los Angeles of the Roman Catholic Church. Its suffragans are the dioceses of Fresno, Monterey in California, Orange in California, San Bernardino, and San Diego. Metropolitan archbishops historically wielded great administrative powers over the suffragan dioceses. Today, such power is only ceremonial and kept as a tradition.

José Gómez is the current Archbishop of Los Angeles, having automatically succeeded his predecessor, Cardinal Roger Mahony who served for 25 years, upon the latter's retirement which took effect on March 1, 2011.[1] Previously, Gómez served as Coadjutor Archbishop of Los Angeles since his appointment by Pope Benedict XVI on April 6, 2010.[2][3][4] He previously served as Archbishop of San Antonio from 2004 to 2010, and as an auxiliary bishop of the Archdiocese of Denver from 2001 to 2004.[5] He is an ordained priest of Opus Dei.[6][7]

Due to its large geographical size and Catholic population, in 1986 Archbishop Roger Mahony subdivided the archdiocese into five administrative subdivisions called pastoral regions. Each region is headed by an auxiliary bishop who functions as the region's episcopal vicar. The five regions are:

Main article: List of schools in the Roman Catholic Archdiocese of Los Angeles

There are 5 colleges and over 50 high schools within the Archdiocese of Los Angeles. Many churches have affiliated primary schools as well.

As directed by the U.S. Conference of Catholic Bishops' Committee on the Liturgy and the Ecclesiastical Province of Los Angeles, the archdiocese annually observes four Holy Days of Obligation. The Roman Catholic Church currently recognizes ten holy days, established in the 1917 Code of Canon Law. However, the USCCB has reduced that number to 6 for Latin Rite dioceses in the United States. As of January 1, 1993, no provinces in the United States celebrate the solemnities of Epiphany, Corpus Christi, Saint Joseph, or the Apostles Saints Peter and Paul.[8] The Province of Los Angeles, which includes the L.A. Archdiocese, further modified the list and currently celebrates 4 holy days of obligation on the day prescribed by canon law. The solemnity of the Ascension is moved from Thursday of the sixth week of Easter to the seventh Sunday of Easter. The province does not celebrate the solemnity of Mary, Mother of God as a holy day.[9] Though this move was not approved by the proper channels, namely the Episcopal Conference with approval of Rome.

The 2006 documentary Deliver Us From Evil is based on accusations that the Archbishop of Los Angeles, Cardinal Mahony, knew that Oliver O'Grady, a priest who sexually abused children, including a 9-month-old baby, in a string of Central California towns for 20 years, was a sexual abuser but failed to keep him away from children. In 1984, a Stockton police investigation into sexual abuse allegations against O'Grady was reportedly closed after diocesan officials promised to remove the priest from any contact with children. Instead, he was reassigned to a parish about 50 miles east, in San Andreas, where he continued to molest children. Not long after, Mahony was promoted to archbishop of Los Angeles, the largest Catholic diocese in the country. In Deliver Us From Evil, O'Grady says Mahony was "very supportive and very compassionate and that another situation had been smoothly handled". Mahony denies knowing that O’Grady was a child molester.[12]

In this regard, on August 24, 2007, U.S. Bankruptcy Judge Louise DeCarl Adler ruled for immediate jury trials for 42 sex-abuse lawsuits against the Diocese of San Diego duly filed by 150 litigants, who alleged sexual crimes by priests to children. The Roman Catholic Diocese of San Diego offered about $4 million to settle the claims but plaintiffs' counsels demanded 10% of a million. With over four million Catholics and several holdings, the archdiocese is the largest and wealthiest of the five United States dioceses which have filed for Chapter 11 bankruptcy protection under the shadow of civil claims over sexual abuse. The Los Angeles archdiocese settled 508 cases for $2 million in July, 2007, while the Orange County, California diocese settled 90 claims for $.2 million in 2004.[13]

Rita Milla, an American citizen who was sexually abused by 7 priests was paid a $500,000 settlement on December 4, 2007, from the Roman Catholic Archdiocese of Los Angeles, America's largest, in her 23-year legal fight. Milla, 46, was one of the plaintiffs in a $660-million-dollar global settlement paid by the diocese reached for past abuse victims of molestation by priests. At 16, she was first abused by Fr. Santiago at Los Angeles and the Roman Catholic Church's failure to help here caused her loss of faith: "It felt like God hanging up the phone on me. I'll never escape the memories and I'll always be fighting the after effects of the trauma I went through, but now I can work on healing." She sued the church in 1984, and Tamayo apologized to her in 1991. Tamayo, who died in 1999, was paid to remain in the Philippines.[14]

On January 22, 2008, Tod Tamberg announced that the Archdiocese of Los Angeles had sold its 12-story Archdiocesan Catholic Center on Wilshire Boulevard to Jamison Properties (David Lee, President) of Los Angeles for $31 million to help pay the $660 million 2007 settlement on sex abuse by clergy. It was donated in 1995 by Thrifty PayLess.[15]

See: List of the Catholic bishops of the United States